A view from COP26: navigating the climate transition with investable indices

Climate-focused indices are a tool of increasing importance in investors’ sustainable toolkit. With nearly $70 trillion from asset owners and money managers pledged towards net-zero targets, climate-oriented indices will play a larger role in investment portfolios as investors reallocate capital to align with these commitments, a panel1 of experts said during the COP26 climate summit.

The discussion organized by Race to Resilience in Glasgow on November 3 centered on the STOXX Willis Towers Watson Climate Transition Indices (CTIs), which are specifically designed to help investors manage climate-transition risks in a robust, yet transparent, rules-based manner. 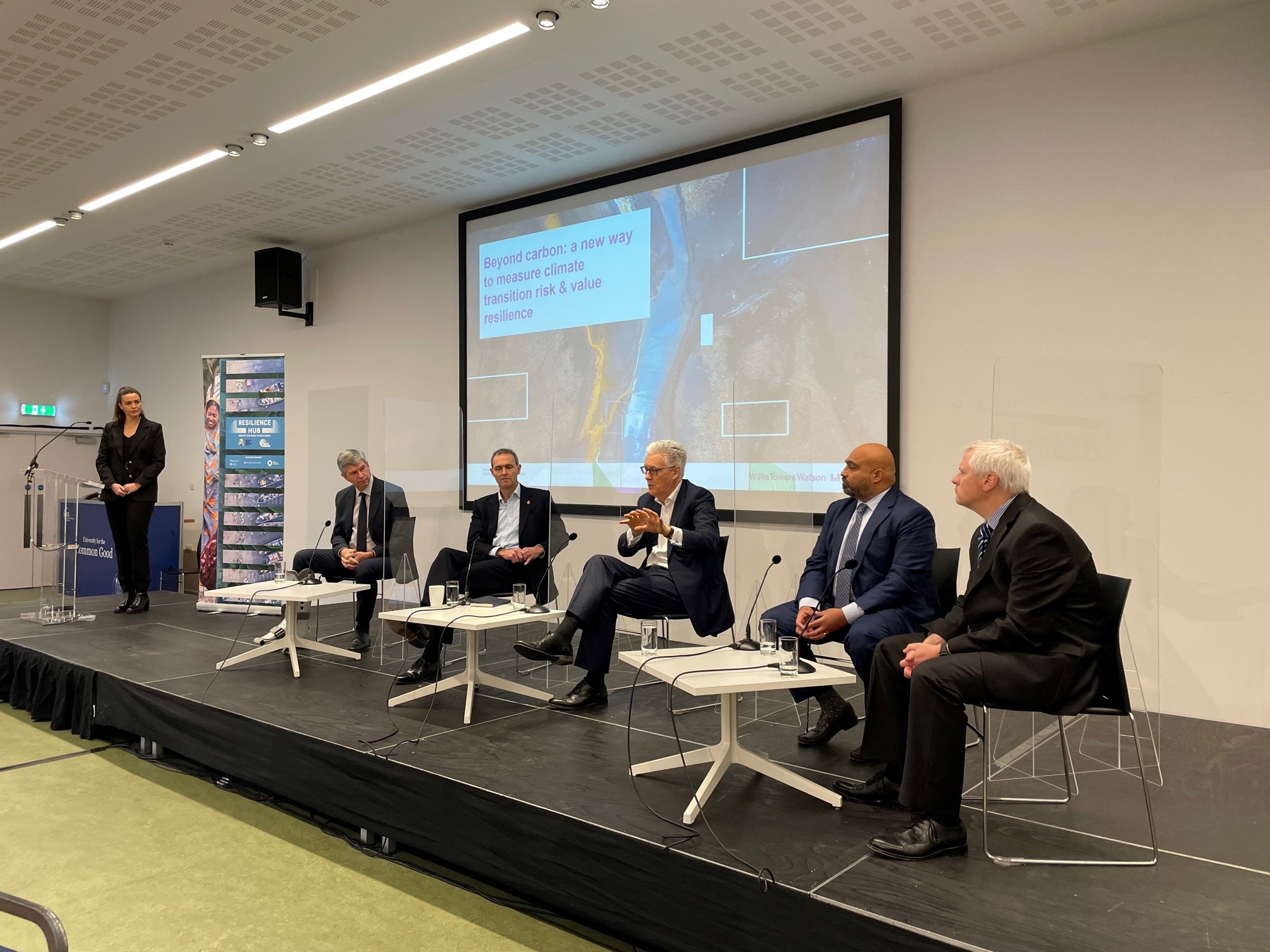 The CTIs are an innovative index series created by Willis Towers Watson (WTW) and Qontigo to meet growing demand for transparent and systematic climate-oriented investment solutions. At the center of the indices is a proprietary and unique Climate Transition Value at Risk (CTVaR) methodology that quantifies the anticipated impact of an economic transition on equity valuations — i.e. how much the value of a company is expected to increase or decrease assuming an economic transition occurs.

Craig Baker, Chief Investment Officer at WTW, explained that the CTIs enable a more sophisticated way of managing climate transition risk, one that looks beyond current carbon emissions and makes a forward-looking, bottom-up evaluation of asset repricing risks in a decarbonization pathway.

“If we focus more on the actual transition risk for each company and align capital to that, it will help governments understand where the key financial risks are, it will help corporates see the impact of transition, and it will allow investors to remove transition risk in their portfolios,” Baker said. “Ultimately, if all these things happen, that will help accelerate the wider move for the broader economy.”

For the past ten years, WTW’s Climate and Resilience Hub team has built extensive climate models based on multiple decarbonization probabilities and climate-transition ‘controversies.’ They analyze and estimate everything from commodities demand to technology advances and policy to arrive at an individual CTVaR for each company.

“What we ask is, ‘what is the current value of company x in the market, what are the expectations for the value of that company, and how would those cash flows and those valuations change if the transition were to happen?’” David Nelson, Climate Transition Analytics Senior Director at WTW’s Climate and Resilience Hub, told the audience. “There are hundreds of elements of the transition. And we come back and say, ‘if the transition is successful, if we reach the carbon budget for 1.5°C or 2°C, then that company might be worth 15% less — or 5% more.’”

A differentiated approach to climate investment

Arun Singhal, Managing Director and Global Head of Index Product Management at Qontigo, said the CTIs offer a differentiated approach to climate investing at a time when investors are increasingly leveraging systematic, rules-based passive strategies to meet their sustainability objectives.

There is a lot of momentum “around the launch of systematic, rules-based investable indices,” he said. “Many of these products are sustainability-related, of which a minority are climate focused. Within the climate-focused products, most use carbon emissions to target carbon reduction.” In the CTI indices, we move beyond carbon emissions and “look at what the valuation risk is going to be at the company level, and bring that to life in an index.”

The index methodology translates “the CTVaR data into a rules-based, systematic index and the key is the probability distribution of that data equated into the weights within the companies in the index.”

Lord Adair Turner, Chairman of the Energy Transitions Commission think tank, said he welcomes new ways of measuring real financial risk stemming from the path to net zero “rather than what were initially incredibly crude measures of carbon intensity.” He forecast there will be “diverse winners and concentrated losers,” and investors face the task of identifying them early in the process.

“I think that’s the challenge and it’s incredibly difficult,” Lord Turner said. “The more tools that we have which really are down at the detailed level in helping us understand that transition, the more that we can start making finance a key driver of” it. Shifting the focus away from current emissions is important, he explained, because many current carbon-intensive companies could emerge as transition beneficiaries in coming years.

As the panel met, the Glasgow Financial Alliance for Net Zero coalition announced a pledge worth up to $130 trillion from its members to reach net zero emissions targets by 2050. Investment managers accounted for $57 trillion of the assets pledged, with $63 trillion coming from banks and $10 trillion from asset owners such as pension funds, the Financial Times reported.2

Bruce Duguid, Head of Stewardship at EOS, said that quantifying transition risk offers a much more effective tool to engage with companies than carbon intensity metrics. EOS is the specialist stewardship services team of Federated Hermes, which oversees $650 billion in clients’ money.

“This is exactly the right direction, to look at risk rather than carbon intensity, because some companies will be able to pass through that risk while others won’t,” Duguid said.

“It is companies that actually deploy the capital, more than investors,” he added. There are barriers to that, he said, including “the mandate to companies to think differently, think long-term and apply the inventiveness of management teams to change the way their businesses operate.”

Indices as a mechanism to accelerate capital allocation and risk pricing

Moreover, indices can act as a powerful mechanism beyond the simple use in investment portfolios, the panelists argued. Indices can help accelerate the allocation of capital flows in the corporate sector and support government policies that are aligned with an economy that is carbon-neutral by 2050, they said.

“You are creating those incentives that make sure that financial markets are aligned with the transition going forward,” WTW’s Nelson added. “That makes the transition repricing come much more quickly.”

In bringing transparency to the economic cost of a transition, the index can also help authorities draft and assess policies.

“The central thinking around this index was to create transparency but also let governments know that they can make policy changes without having transition risks,” said Nelson. “This is not just a tool for investors, but it is a tool that should be making the job of politicians and policymakers easier to pursue the targets that we need.”

Investors now have valid options to understand the true cost of climate transition and to act to align financial markets with the goals of the Paris Agreement. Lord Turner said there is a moral imperative for asset owners and managers to take on climate responsibility — one which can also generate positive financial returns.

Overall, the panel was an enlightening addition to the debates taking place at COP26. Despite criticism about political shortfalls, the global summit in Glasgow will be remembered as the platform where the world’s financial-services industry stepped up its leadership and ambition in the fight against climate change and efforts to build a smooth and effective transition.