Thematic investing has seen rapid growth over the last few years as investors increasingly seek exposure to long-term structural trends. Such trends are usually driven by transformative forces impacting the global economy, business and societies. Given their longer-term nature, these trends are less dependent on market timing and can be significantly more powerful in magnitude than traditional cyclical investments.

At its core, thematic investing uses indicators to identify megatrends and the companies that are most likely to be their beneficiaries, through the provision of key technologies and infrastructure to support the development of each theme.

Qontigo’s STOXX Thematic family includes over two dozen indices within the three broad categories of future technology, socio-demographics and the environment. By adopting an open architecture and utilizing quantifiable and measurable indicators for index construction, we develop indices that capture exposure to themes in accurate and effective ways. The suite is not static in its methodology and analysis of the market and economies, but rather seeks to adopt new technologies and datasets as they become available.

As technological and data extraction advancements gain pace and new paradigms constantly emerge, being able to spot the potential winners of tomorrow ahead of the curve has its obvious benefits but comes with additional challenges. Thematic investing, by nature, is forward-looking and requires a predictive assessment of growth and an indication of a company’s level of involvement within a specific thematic segment.

When a transformative element is introduced into a market, it often takes years for it to penetrate and propagate. The diffusion of innovations is a theory by Professor Everett Rogers that seeks to explain how, why and at what rate new ideas and technology spread (Figure 1). The adoption curve breaks down customers into five segments: innovators, early adopters, early majority, late majority and laggards.

Technological innovation appeals mostly to the ‘innovators’ and ‘early adopters.’ However, at this stage, the penetration of the target market is still relatively small, and subsequently, so is the potential for revenue generation. The ‘early majority’ is the steepest part of the adoption curve and where the innovation is embraced at the fastest rate. In this phase, sales tend to explode and revenues are likely to experience a considerable uptick. By the time a technology reaches the ‘late majority’ and ‘laggards,’ it has achieved mass adoption, and virtually all of the potential market for a product has been captured. 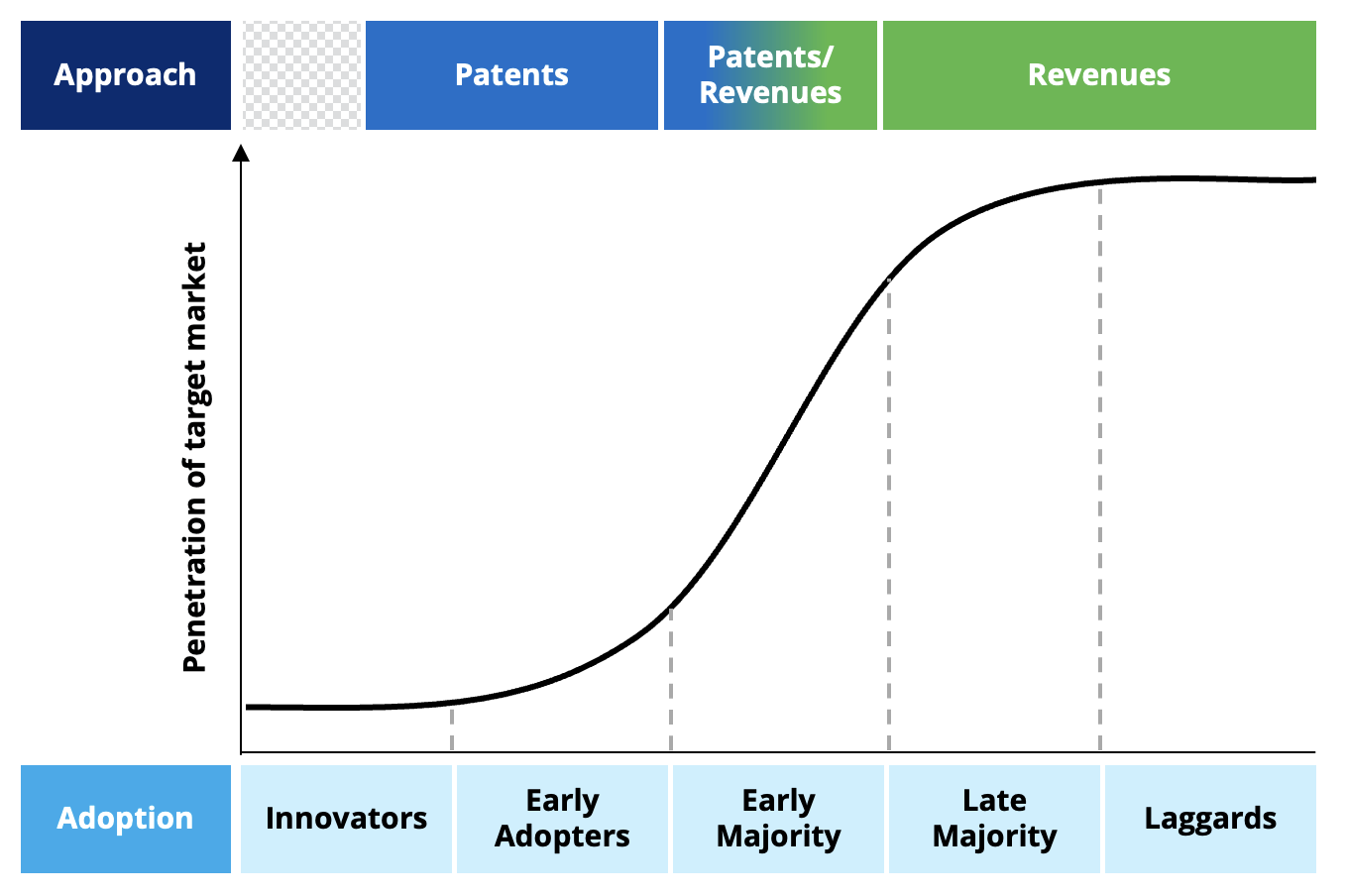 The lifecycle through a thematic investing lens

Revenue-based data have gained popularity in thematic investing due to their linkage to share prices and the ability to establish how aligned a company is to a particular theme. While there are differing levels of granularity and approaches to mapping this information, the basic principle at play is that the higher the proportion of a company’s overall revenue is to a particular theme, the more involved it is in that activity. Revenues effectively capture mature themes in the later part of the adoption curve, but how can we identify companies innovating in areas that are earlier on in the curve?

One possibility is to consider patents, which are forward-looking and one of the most reliable indicators of innovation activities. A patent is essentially a form of intellectual property that gives its owner the legal right to exclude others from making, using or selling the invention without their permission for a limited time. Owners also use it as a signal to the external markets, giving indication of their research and progress. As a rule of thumb, patents show with a lead time of 2-5 years in which technology companies will be active in the future. This means that a company with significant patent activity in a certain technology will likely develop and monetize a product in the coming years. Conversely, a company without patents is unlikely to play an active role in the specific activity in the future.

Through the quantitative analysis of patents filed by companies, it is possible to gather intelligence on technologies and market trends. By further grouping these patents into understandable concepts, the layer of abstraction is removed, and future markets can be accessed. Additionally, through peer patent group analysis, it is possible to determine which companies are innovating the most and, therefore, likely to be the leaders of tomorrow within their field.

Unlocking the next phase of thematic investing

Index construction has become increasingly sophisticated over the years with the proliferation of data and advancements in tools that improve index construction capabilities. Patent-based datasets are integral to unlocking the next phase of thematic investing and capitalizing on the growth of disruptive trends. When translated into a systematic, transparent index strategy, it allows investors to access the more early-stage themes and those companies that are most likely to excel and, therefore, generate exponential revenues from them.

In this sense, patent-based information can play a key role in harnessing themes across the adoption lifecycle. As such, investors can target their exposure to themes in accordance with their investment objectives.

* Ladi Williams is Director in Index Product Management at Qontigo.

Multi-factor investing with iShares ETFs and STOXX Indices by Qontigo