We are excited to introduce four new charts showing risk and return data for the 11 GICS sectors in each major benchmark covered by our Equity Risk Monitors. The new data is reflected in Charts 29, 30, 31, and 32 on each Risk Monitor. Chart 29 shows the cumulative sector return over the past 12 months. Charts 30 and 31 show sector risk and returns, respectively, at various points in time. Chart 32 shows each sector’s contribution to the benchmark return for various periods.

The global Energy sector took a hit in recent weeks, as oil prices slipped from their June peaks on weak demand and increased supply. Still, Energy remained the best six- and 12-month performer among all GICS sectors in the STOXX Global 1800 Index, with an impressive cumulative 12-month return of nearly 40%.

In contrast, most other sectors posted negative returns, while the Global index fell more than 10% over the same period. Energy was no longer the riskiest global sector last week, with Information Technology taking its place, as measured by Axioma’s Worldwide fundamental short-horizon risk model. 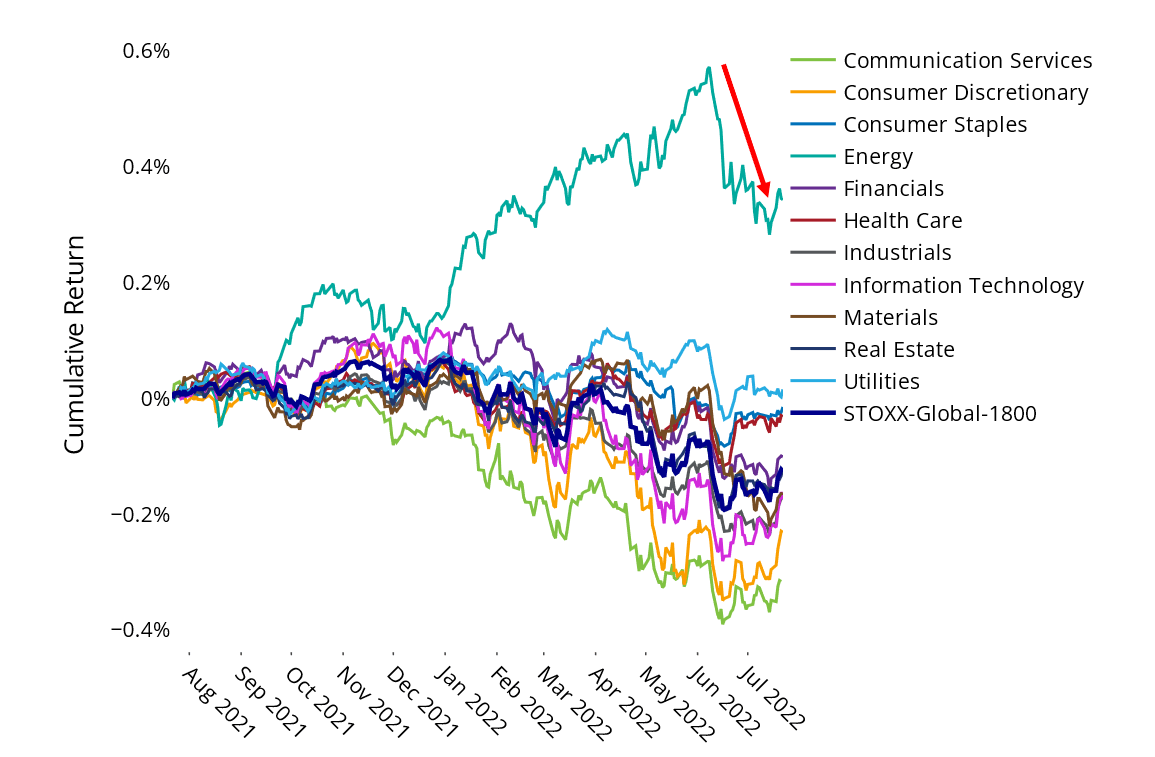 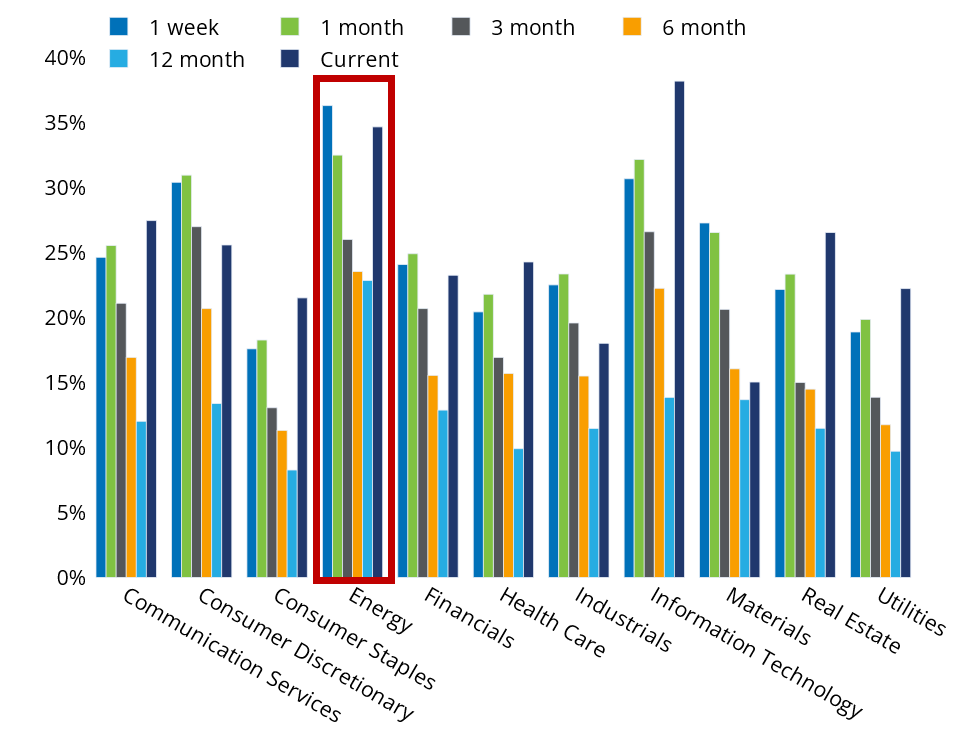 US Info Tech and Consumer Discretionary see a small comeback

Information Technology and Consumer Discretionary, the first and third largest US sectors, drove the US market rally last week. The two downtrodden sectors contributed more than 60% to the STOXX USA 900 Index’s weekly gain of nearly 3%, as investors were emboldened by better-than-expected earnings reports.

Despite being up last week, Consumer Discretionary and Info Tech were among the worst performing sectors in the US, falling 20% and 15%, respectively, over the past 12 months. Together, the two sectors contributed over 50% to the US benchmark risk.

See graphs from the United States Equity Risk Monitor as of July 22, 2022: 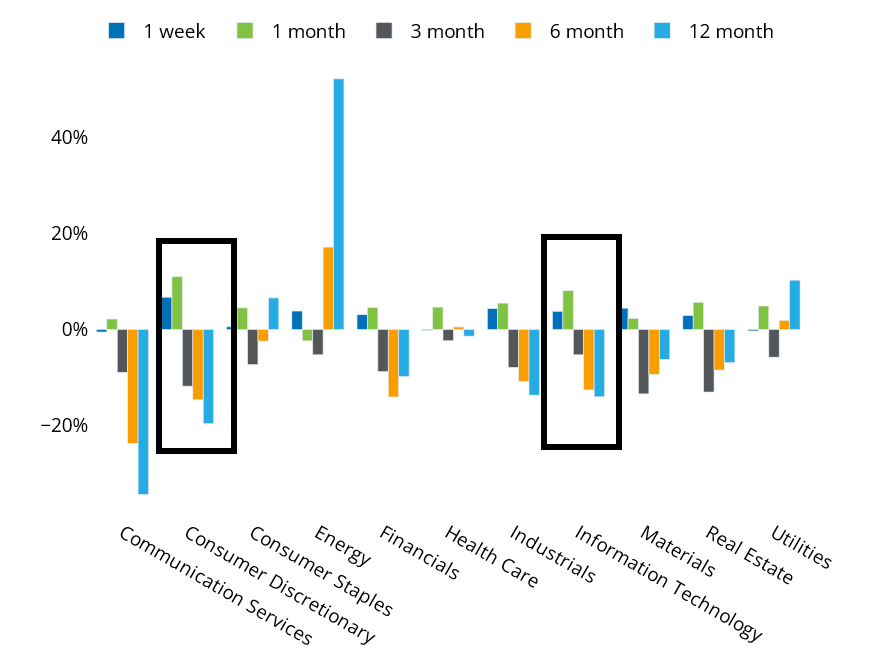 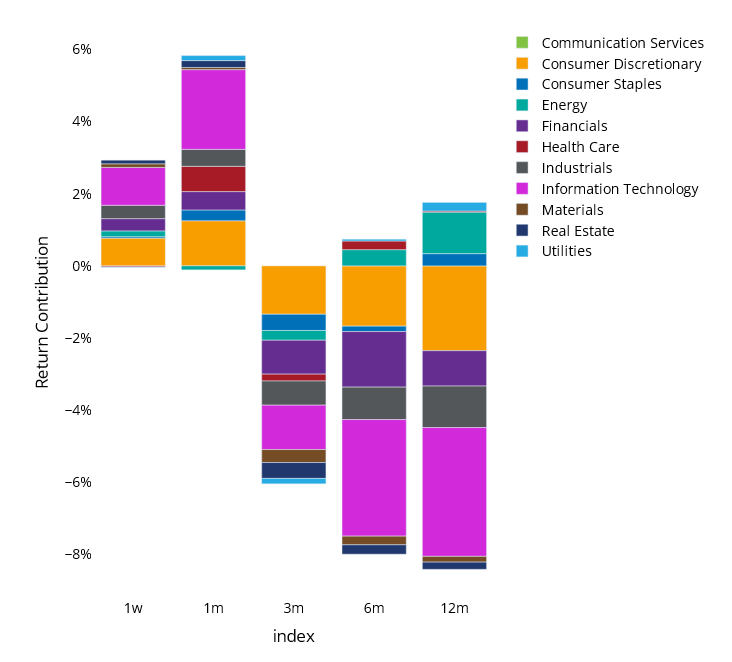 In spite of multiple geo-political and economic concerns in Europe, the risk of the STOXX Europe 600 index remained relatively flat in recent weeks. Europe has seen a good deal of turbulence lately, with the British and Italian prime ministers resigning, the European Central Bank raising rates for the first time in 11 years last week in an attempt to temper rampant inflation in the euro zone, while the Russia-Ukraine war continued.

Europe’s risk has been hovering around 22% this month, as reflected by Axioma’s Europe fundamental short-horizon model. As of last Friday, risk of the STOXX Europe 600 Index was somewhere in the middle of the pack, among all geographies covered by Qontigo’s Equity Risk Monitors. US was still in the lead, with 27% volatility.

You can browse through all research from Qontigo’s Applied Research team, in our resource center.

Stocks jump by most since 2020 in July on interest-rate outlook, earnings beats