From Institutions to Sovereign Wealth Funds, Here’s Who Owns the DAX

A growing presence of US-based institutional investors and of investment firms that observe ESG considerations are among findings in an analysis of who owns the stocks in Germany’s DAX®.

The annual study1 by IHS Markit and the German Investor Relations Association (DIRK), now in its eighth edition, sheds light on the ownership structure of shares tracked by the German blue-chip index, revealing a diverse and global body of investment groups.

Institutional firms — which manage assets on behalf of investors, from insurers and pension funds to small savers — owned 62.1% of the free float of DAX constituents as of the end of 2020, according to the study. That’s up 0.9 percentage points from 2019. Strategic investors — including families and foundations, holding companies, the government and sovereign wealth funds — made up 18.6% of the stockholding, down 1.1 points from a year earlier. Retail investors — defined as individuals who own the shares directly such as through a broker — represented 16.7% of the ownership, little changed from a year earlier.

US investors raise their stakes further

The key presence of institutional investors is dominated in turn by US-based managers, and particularly among them, of managers of index-tracking funds. Yet, in 2020, both active and passive American investors increased their presence in the DAX universe, according to the study. Ownership by North American institutional investors grew to 37.6% of the total, from 35% in 2019 and 31.8% in 2013.2 UK investors boosted their presence by more than 1 percentage point to 20.7%.

“The ownership structure of the DAX is more international than ever,” said Frederik Frank, Director for Shareholder Intelligence at IHS Markit, in an interview. “Overseas institutional investors increased their presence despite the extreme volatility witnessed due to the global pandemic, and, for British investors, the uncertainty caused by Brexit.”

On the other hand, Germany-based institutional investors reduced their share of the DAX market to 13.3% of the total from 14.8% in 2019, a fourth consecutive sell-down.

The study looked at the free float of listed shares in the 30 DAX companies for the analysis. IHS Markit and DIRK collected the information from public and proprietary data, and looked at managers who have the shareholding mandate, rather than the final owner of the underlying investment.

Last year Qontigo launched an overhaul of the DAX indices to align their methodology with international standards and increase the corporate quality of constituent members. New index rules have been established successively since last December, and the process will culminate next September when the benchmark DAX will increase to 40 components.

Growth funds, which track an investment style that did particularly well in 2020, grew their share of total market ownership to 30.4% from 28.8%. Value funds, which remain the largest style by ownership of DAX shares, dropped to 33.8% of the market from 35.3% in 2019, the data show. Funds that track indices slightly reduced their presence to 23.3% of the total.

Combining its index-linked, active and other investments, BlackRock Inc. owned USD 83.6 billion in DAX assets at the end of last year, or 10% of the total free float, more than any other investment group. While the value of its assets rose 40.5% in dollars, its shareholding of the free float remained little changed.

Vanguard Group Inc. is the second-largest investment group, with USD 45.3 billion, or 5.4 % of the free float. That compares with USD 29.2 billion and 5.1%, respectively, a year earlier. BlackRock’s and Vanguard’s holdings reflect the clout of the two managers’ exchange-traded-fund business. 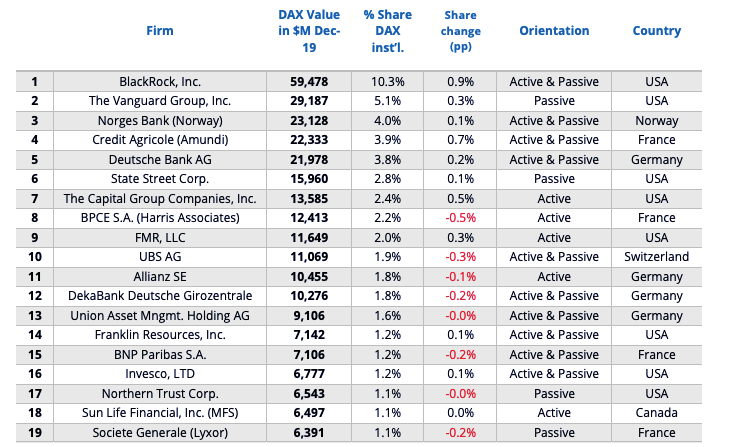 ESG has been a growing trend in recent years and that is reflected in the ownership structure of the DAX. While passive and ETF investors may not engage with fund sponsors regarding sustainability issues, many of the latter incorporate ESG principles in their engagement with investee companies.

In fact, a total of 87.7% of the top 100 investors in DAX shares had a medium to high sensitivity to ESG issues as of end-2020, up from 76.4% in 2019, according to the analysis by IHS Markit and DIRK. That includes all top ten investors. Just over 11% have a low sensitivity, while only 1.2% appear to have no focus on ESG topics.

“The message here to all issuers is: you’ve got to have some communication around what your company is doing in terms of sustainability and ESG,” IHS Markit’s Frank said. “If you don’t have it, you might lose out on investments coming from big investors.”

Shareholders are taking their duties more seriously than ever, the report added. Among the 100 largest shareholders in the DAX, 95.1% actively exercise their voting rights at general meetings.

Such a turn of focus towards sustainability was behind the introduction last year of the DAX® 50 ESG Index, a benchmark for German equities that excludes companies engaged in controversial activities and integrates ESG scoring into stock selection. This year, Qontigo also launched the DAX® ESG Target Index, which aims to reflect the risk and return characteristics of the original DAX Index while applying ESG screens, integrating ESG scores and reducing carbon intensity by at least 30%.

The 265 investment firms based in London that are DAX share owners make the British capital the largest seat of stakeholders in the German benchmark, representing 12% of all institutional money invested. Frankfurt follows with 8.2% of the institutional capital and 57 firms. Paris is the second city by number of DAX investors, with 182 firms.

1 IHS Markit, ‘Who owns the German DAX?’ June 2021.
2 Each management entity, including subsidiaries of international investment groups, counts towards the region it is located in.