In the news this week: US inflation, retail sales, and industrial output data this week, together with   Fed Chair Powell testimony and quarterly earnings reports from almost 500 companies. Elsewhere, GDP numbers for the UK and Germany, along with consumer and producer prices for China. All will be buried below stories about the spread of the coronavirus across the world.

Summary: As the death toll from the coronavirus now exceeds that of the entire SARS epidemic of 2003, investor sentiment has ceased to be supportive of higher market levels and lies firmly in the neutral zone, awaiting direction.  The exception is Japan which seems to be increasingly negative about the situation.  ROOF ratios in that market are increasing their foray into unsupportive territory so expect some over-reaction from investors to even mildly negative news on the fundamentals mentioned above.

Sentiment in the US continued to decline this past week into neutral territory as the evolving narrative around the coronavirus’ global spread makes it hard to model its impact without knowing when or how it will end.

Last week the prophet algorithm predicted a continued decline in sentiment direction with a week-ending value of 0.2 – we ended the week with an actual value of 0.1.  For this week, PROPHET (the time series forecasting algorithm made openly available by the data science team at Facebook), is predicting a continued stroll into indecision land with the ROOF ratio crossing the ‘0’ level by the end of the week.

Collectively, what this means is that investors are unsure how this new viral outbreak will end and therefore what kind of damage it will do to the economic fundamentals underlying their current investment thesis.  They will most likely look to the Fed and other global institutions for direction.  The quarterly earning season is coming to an end, meaning CEOs will not be actively talking any more soon which should translate into lower stock specific risk and higher contribution from factor risk.

Last week also saw the end of the impeachment process in the US with what President Trump is calling a big (personal) victory.  Investors may be growing unsure if he will not take that newfound sense of invincibility for a spin against one or more of his favorite trade surplus targets.  Just like the coronavirus, the Trump factor is somewhat unpredictable, and no one knows when and where it will strike next; just that now would be the worst time for it. 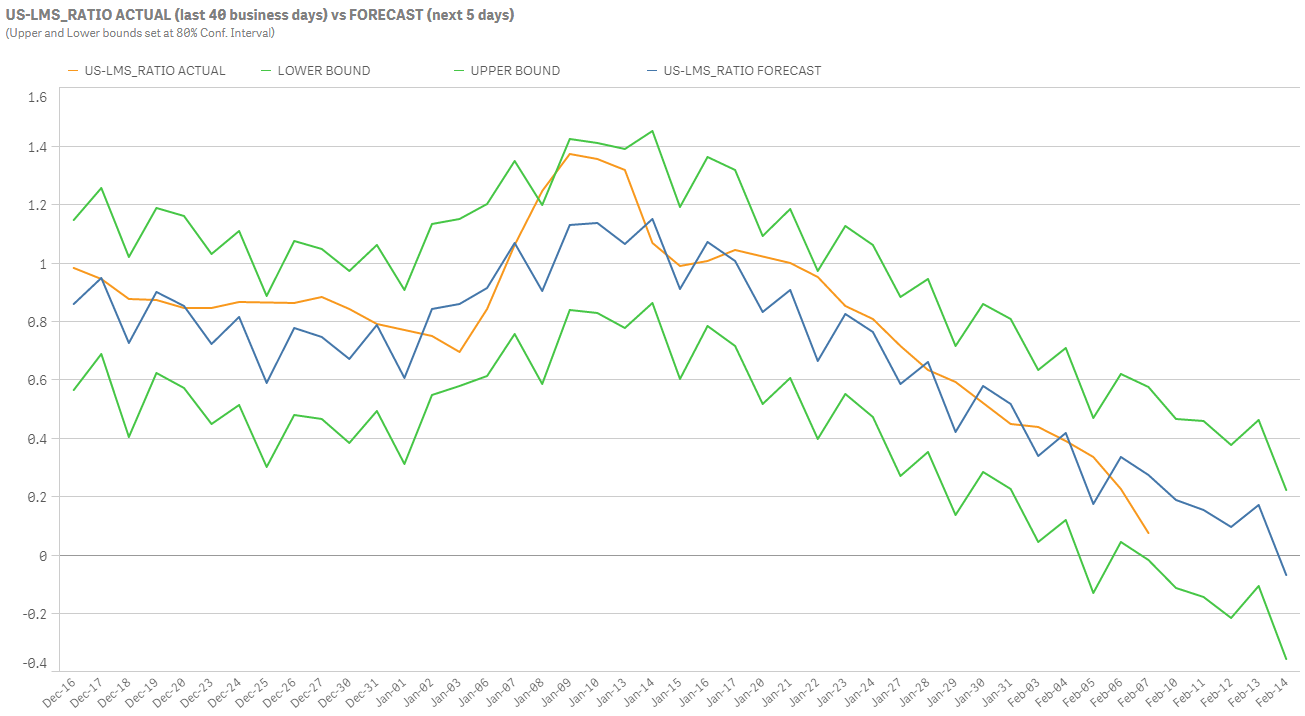 Sentiment continued to weaken in Japan with the ROOF Ratio crossing below the negative one-standard deviation level for the first time since early September last year.

Japanese investors are the most bearish they have been since the first week of September 2019, and that’s just after having been the most bullish in December since March 2019.  The daily ROOF Scores point to a slight recovery towards neutral in the next few days but nothing that will support a market rallying to new highs (we would need to see a ROOF Ratio above 0.5 for that).

Volatility is rising in that market and uncertainty takes its cues (or lack thereof) from the global coronavirus outbreak, which translates into a lower confidence in return forecasts combined with bigger losses for being wrong.  Earning season for that market is still two months away so, Japanese investors have yet to hear from their CEOs about how disruptive this outbreak has been for their business.  We know Chinese tourists, a vital source of income for Japanese companies, cannot travel for now, but what about the rest of the world, are they picking up the slack by daring to travel to a region at the epicenter of a global health crisis?

The USD/JPY is still holding above the 109 level, on the back of what is mostly a surprise USD rally, which is providing some floor on sentiment, but the market rebound rally of the last few days looks more speculative than fundamentally driven given the higher volatility and uncertainty levels. With a ROOF Ratio at these levels, Japanese investors may be prone to over-reacting to negative news, when it comes, making the downside risk bigger than the upside potential from these levels. 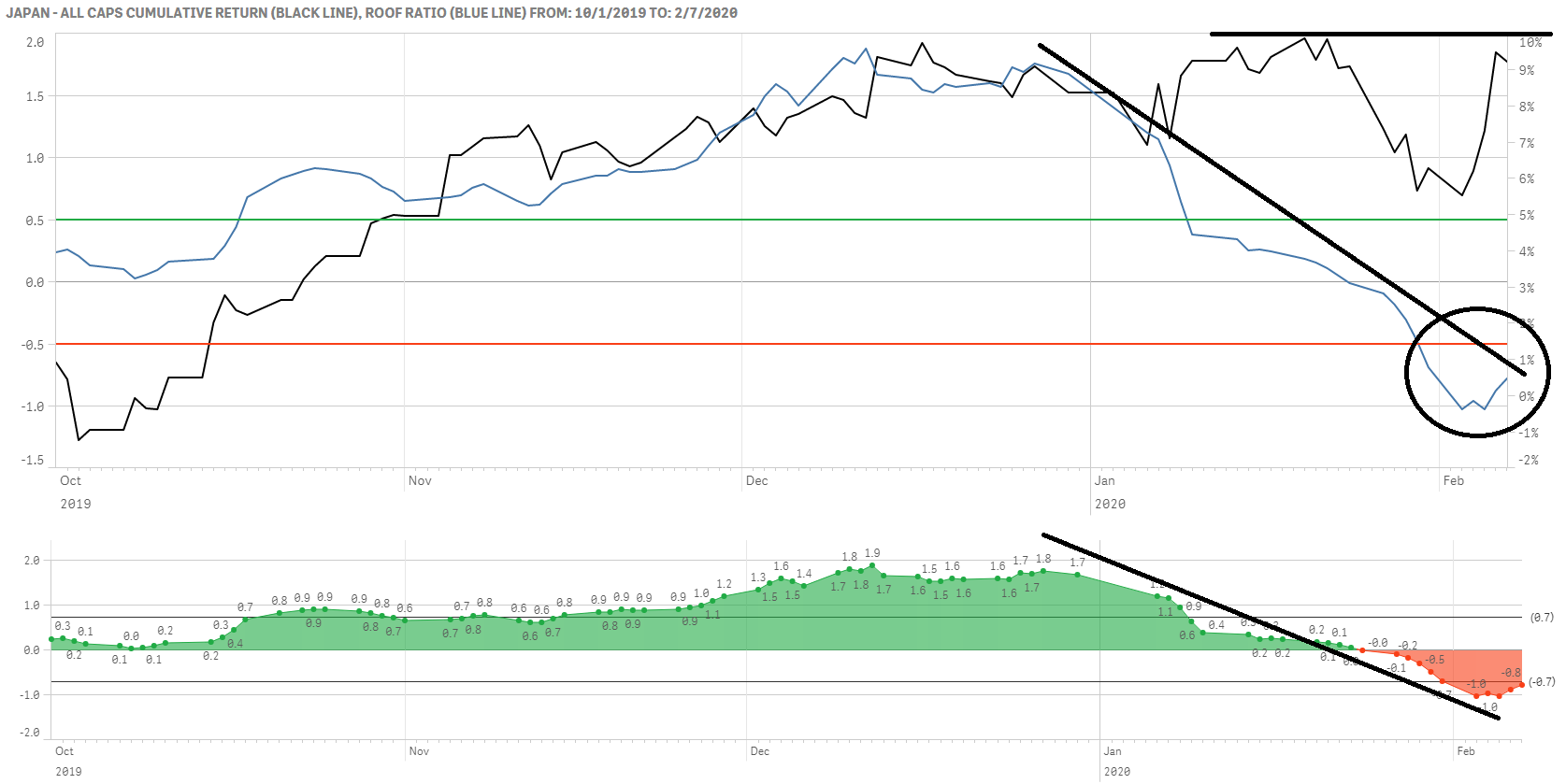 Sentiment in China had been steadily declining from its strongly supportive days of late December to neutral as of mid-January and seems headed for the unsupportive levels over the next few days.

Not surprisingly, sentiment for Chinese investors, by far the most affected by the coronavirus outbreak, has continued to drift down and last week crossed into negative territory, the lowest it has been since November last year – any lower and we have to go back to June 2019 to see sentiment this weak.

Here too, with sentiment this low and seemingly headed lower in the near term, it is hard to see the current rebound rally get much support for a sustained run at higher levels. Risk aversion has been rising and risk tolerance falling, creating a daily ROOF Score of -2.1.  That seems too much of a supply/demand imbalance for risk assets to keep rising. The narrative around the coronavirus would have to become much more positive and much faster for sentiment to become supportive of this latest rally. 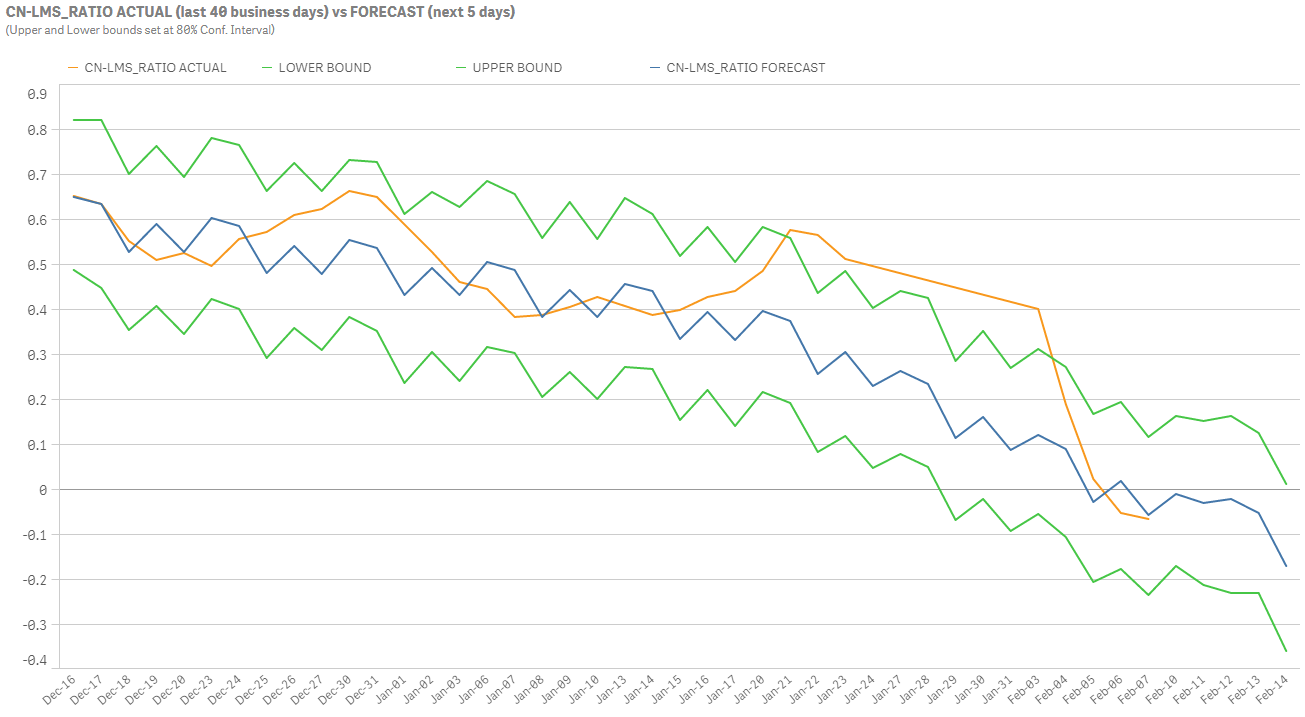 The future of school and play: a look at the STOXX Global Digital Entertainment and Education Index