In the news this week: March US retail sales, industrial production, and housing starts as well as the Philadelphia Fed’s manufacturing index for April and the next installment in the weekly jobless claims for the week of April 11. March import and export data for China as well as industrial production, retail sales, and Q1 GDP. Q1 earning isn’t off to a good start with some postponements in Japan and Delta CEO saying he simply doesn’t know when this will end, but it will be a key mood-setter for the next few weeks.

Summary: Investors may soon have a problem with the curve. Globally, risk aversion levels continue to decline and are the main driving force behind improving sentiment (i.e. we’re not bullish, just a little bit less scared). Developed Europe has gone as far as returning to a neutral stance ahead of some economies’ reopening this week. While declining pessimism has a root cause (declining pandemic curves), rising optimism doesn’t have much data to rely on at this point. The Q1 earning season and CEOs’ outlook for the rest of the year will be their first ‘informed’ data point to plug into their forecasting models. But, as we have seen so far with Japan’s postponement of several releases, and Delta’s CEO telling investors “we just don’t know”, investor’s search for answers may have to wait. Meanwhile, pandemic curves can quickly change direction if reopenings lead to second waves in Spain, China, and Italy.

Sentiment in the US improves greatly but remains just shy of the neutral zone.

Sentiment continues to improve but certainly not at a pace that would suggest a degree of confidence that the worst is behind us.  Risk Aversion levels have come off their (almost) historical highs but they remain elevated and the ROOF ratio is still only at a 23-precentile level. 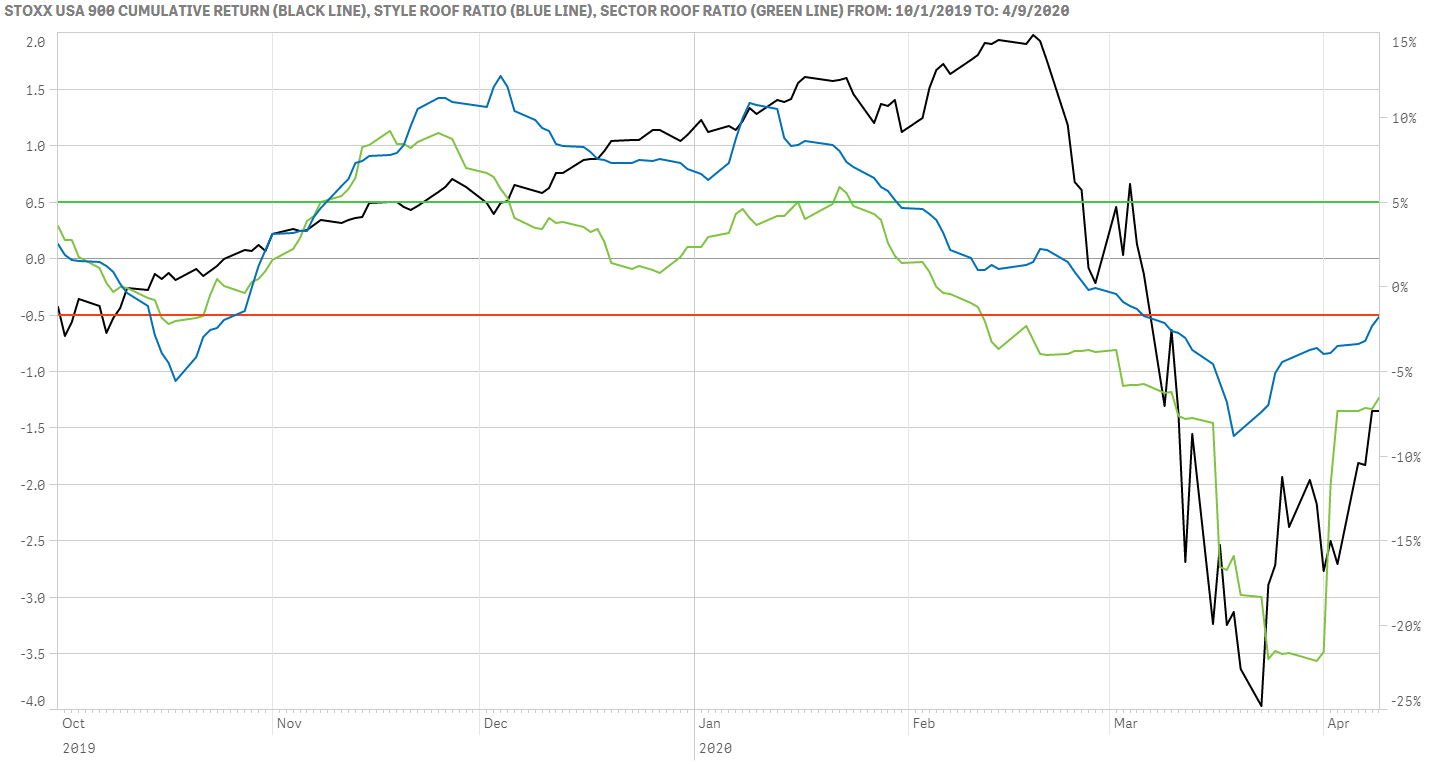 Both supply and demand for risk helped the recovering risk appetite last week but the imbalance between the two remains large in both methodologies. This means that behaviorally, investors remain more worried about being sucked into a bear trap than missing the start of a real recovery rally. The narrative from CEOs during this earning season about the rest of the year will be key in lifting some of the uncertainty that prevents investors from making a credible forecast.

Sentiment in Developed Europe returned to the neutral zone for both methodologies.

Improving daily infection statistics in Europe’s worst hit countries have helped investors’ risk aversion decline for two consecutive weeks now. The chart below shows the curve for daily infection rate and risk aversion. The partial reopening of some economies has also helped risk tolerance rise from its lows bringing  supply and demand for risk back to equilibrium with both ROOF Ratios at zero.  This optimism is a departure from other markets where supply still outstrips demand and a lot of uncertainty remains 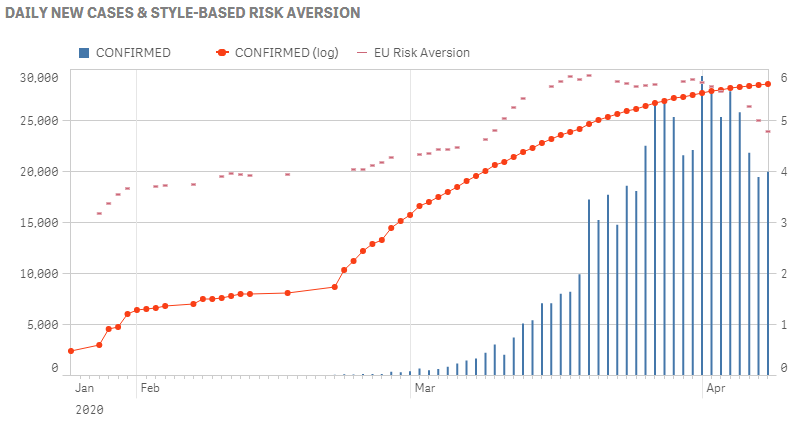 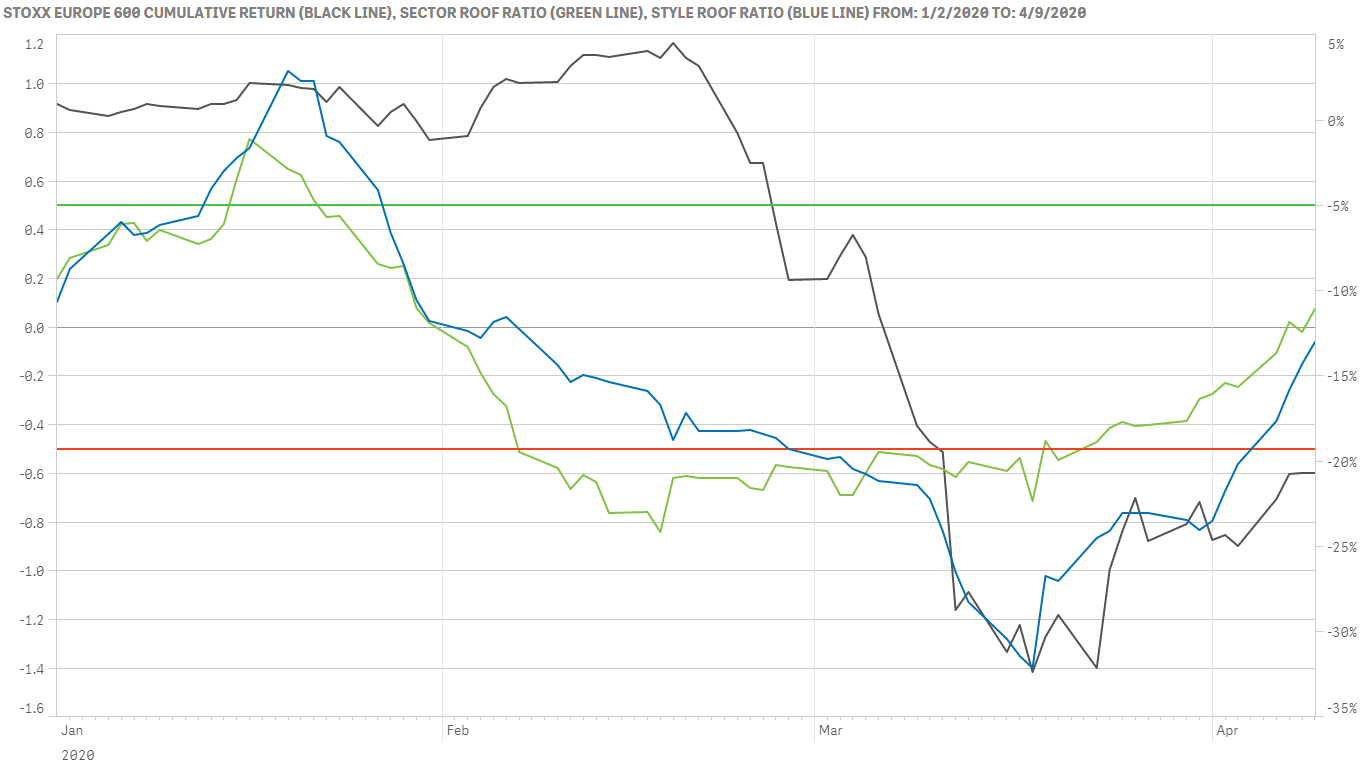 Sentiment in global developed market continues to improve but remains in bearish territory.

Sentiment among global developed market investors continues to improve, slowly. The ROOF Ratios remain in bearish territory but are now just shy of the neutral zone for both methodologies. Like in the US, we notice that risk aversion is declining faster than risk tolerance is rising, indicating that behaviorally, downside-risk concerns still seem to be driving behavior more strongly than upside-potential. 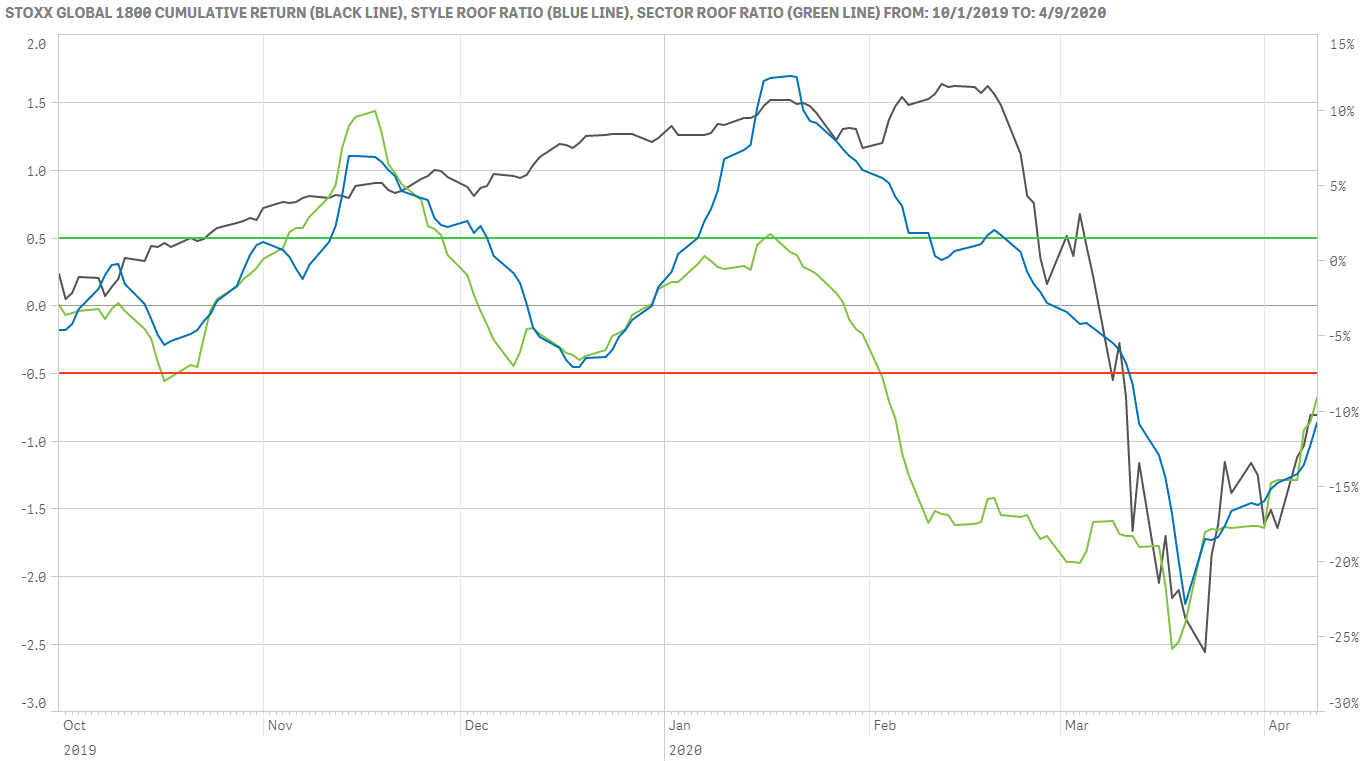 As investors get less risk averse, they are not buying as much of the risk averse sectors, but they are also not buying much more of the risk tolerant ones, indicating that they still have a defensive mindset going into the Q1 earnings season.  Risk averse sectors don’t need to do much to remain popular when risk appetite is low, but investors require a lot from risk tolerant ones to switch, so the burden of proof is on the latter this earning season. Bearish guidance will mean declining risk tolerance and rising risk aversion returning the ROOF Ratio towards bearish territory.