In the news this week: Coronavirus will continue to dominate the headlines as well as first-quarter earnings for nearly a fifth of S&P 500 companies versus one-tenth up to now. Elsewhere, flash PMI surveys for the US, UK, Eurozone, Japan and Australia, while the BoC in China is expected to cut rates. Also due out this week are US durable goods orders, UK retail trade and business optimism, Eurozone consumer morale, Japan trade balance and inflation, and South Korea Q1 GDP, and volatility in the oil market.

Summary: Sentiment continued to improve last week with all markets we track back firmly in the neutral zone now, with some, developed Europe and Asia ex-Japan, close to going into bullish territory. In a sense, the risk appetite curves follow the pandemic curves, which are showing the most improvements in Asia ex-Japan and parts of western Europe. The US having been hit last and hardest, is still lagging in both pandemic and risk appetite curves.  The strong recovery in sentiment indicates that investors are buying (and paying for) a V-shape recovery scenario which, so far, isn’t being denied by CEOs, and are brushing away negative economic data as a lagging indicator. Still, as we boldly sail into the great pandemic unknown, we face a binary situation – second wave, or no second wave? Too early to tell.

Sentiment in the US is back to neutral. Now what?

Sentiment in the US is back to neutral, at least as far as our style factor-based ROOF Ratios are concerned.  The sector-based variant is lagging somewhat due to highly volatile sectors like Energy, but the correlation between the two methodologies YTD is 0.90, indicating that it too should cross into neutral territory soon. 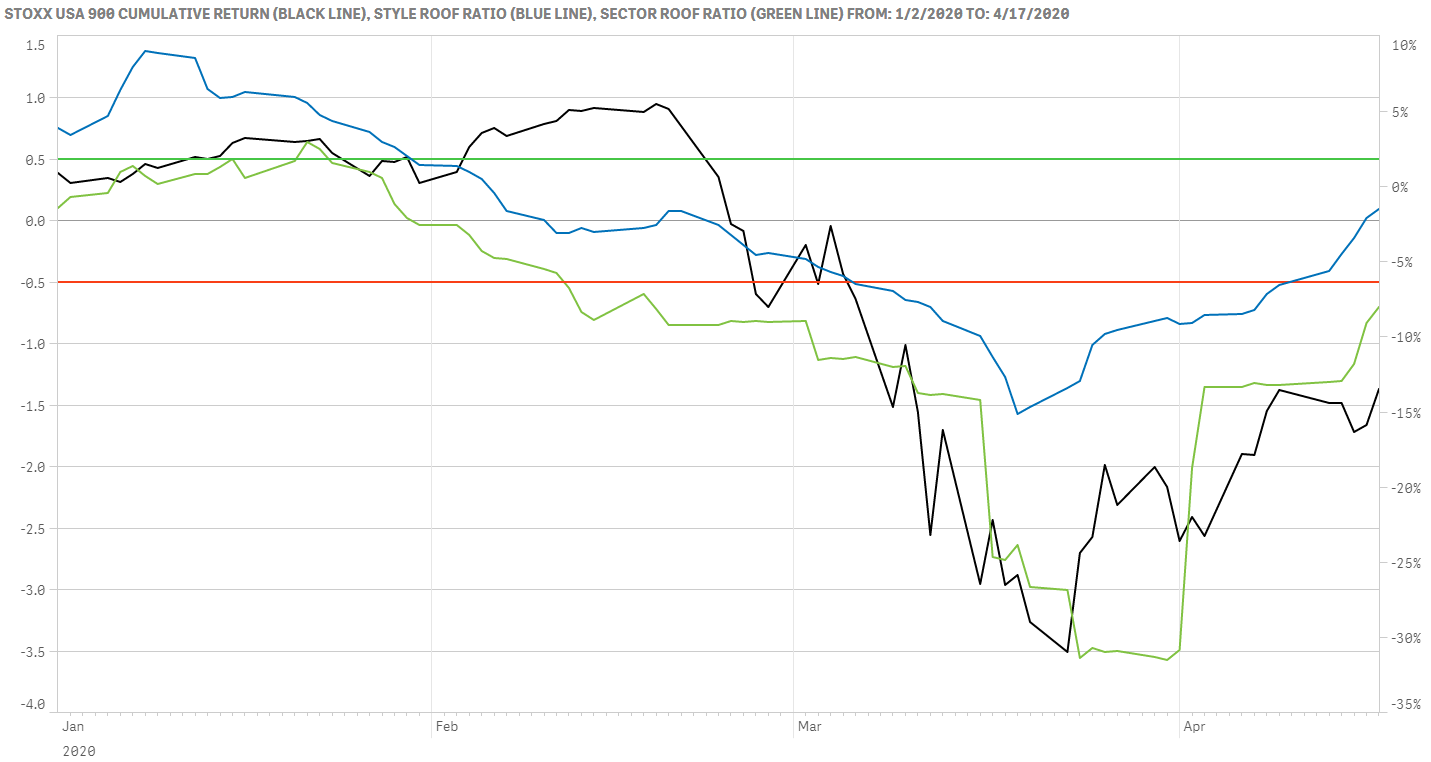 The gap between the demand (risk tolerance) and the supply (risk aversion) of risk in our style-based methodology has now closed and could be a reflection of investors’ declining uncertainty about the length of the pandemic as well as their desire to take advantage of what they feel are low valuations. Still, in order to push higher, more confidence is needed by way of real data about the timing and strength of a recovery.  Any signs of a prolonged lockdown or of rising risk of second waves after reopening will send risk aversion shooting back up. For now, investors seem evenly divided between bull and bear scenarios. That’s enough for a 50% retracement of the March selloff, but not enough for a full retracement.

Sentiment in Developed Europe is the most positive of all markets we track.

Investors in developed Europe are now the most positive of all markets we track and seem to be predicting a continued improvement in the number of daily new cases across Western Europe. 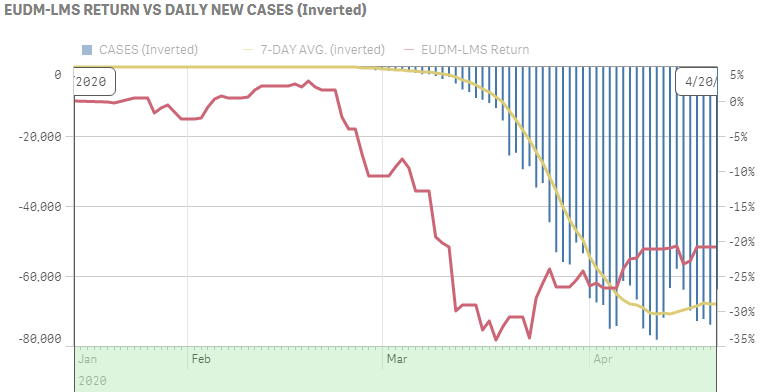 Unlike for the US market, the sector-based ROOF Ratio for Developed Europe seems to have anticipated both the selloff and the recovery earlier than its style-based counterpart and with a bit less emotion. Investors there seem to be more convinced of a best-case recovery scenario with several economies ‘re-opening’ this week.  Several western European countries have their exponential pandemic growth curves going in the right direction, but this data only reflects the spread under lockdown conditions, and it remains to be seen if those curves can maintain their trend after reopening occurs. 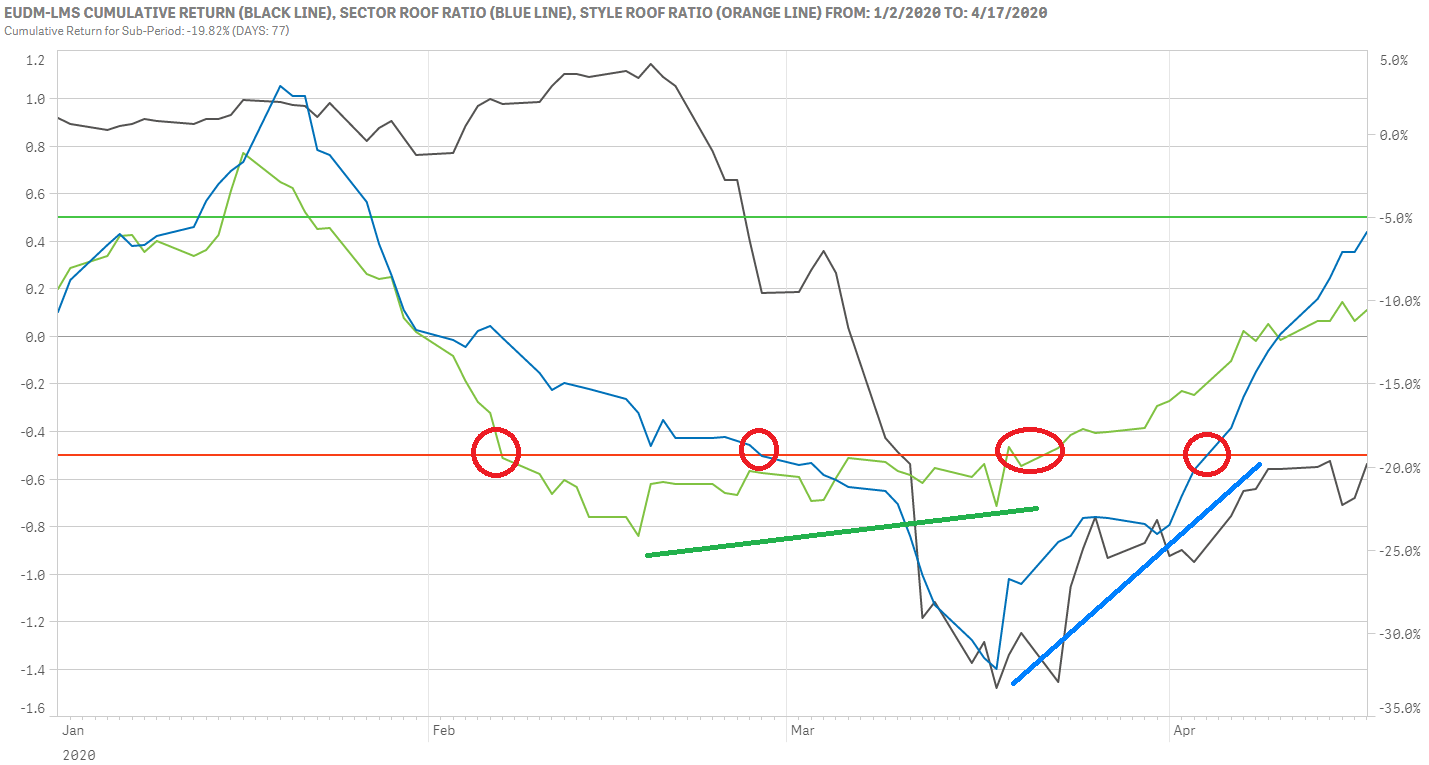 Sentiment in both global developed and Asia ex-Japan markets are both firmly in the neutral zone now.

Sentiment Asia ex-Japan recovered strongly this past week for both ROOF methodologies. Interestingly, in this market, both style-based and sector-based sentiment indicators were in almost perfect synch (0.95 correlation) YTD.  Investors there are opening the reopening of the global economy will benefit Asia. 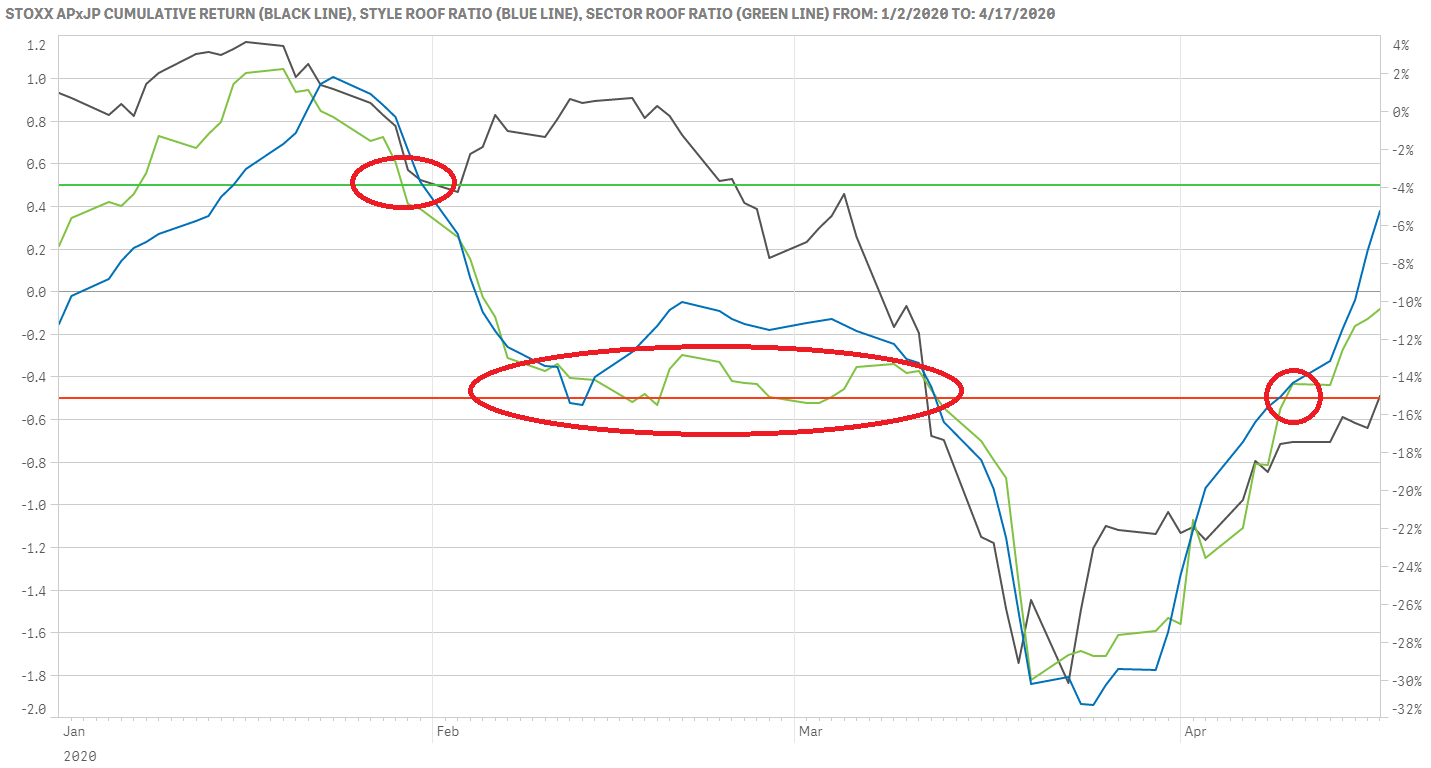 The sector-based ROOF Ratio for global developed markets was more than a month ahead of the sty-based ones in predicting a downturn, but both agreed on the timing of the current rebound. As elsewhere, this recovery in sentiment was enough for the current 50% retracement, but for more ? 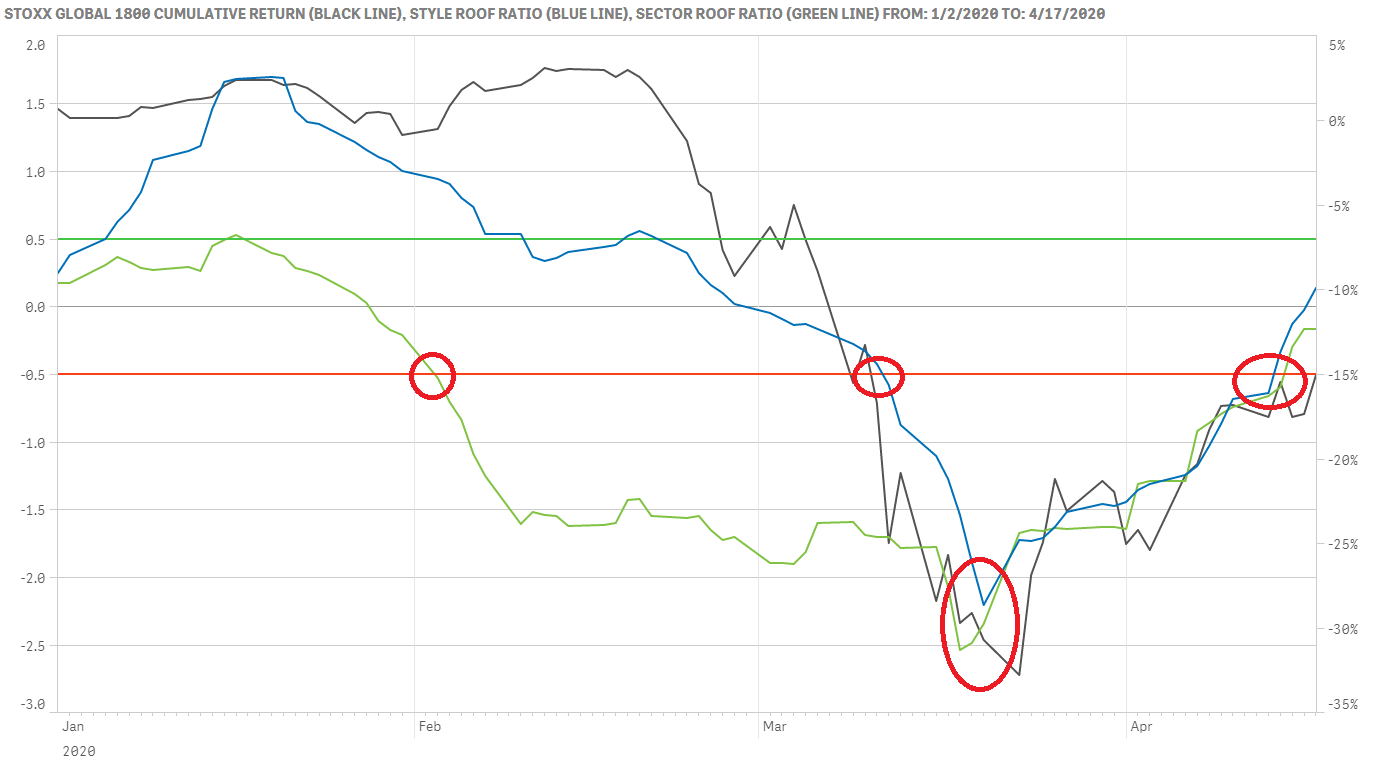