Potential triggers this week: The US earnings season continues with Alphabet, Microsoft, Apple, Amazon and Facebook reporting. Central bank policy meetings in the US, Eurozone and Japan, as well as GDP data for the US and Eurozone and PMI survey for China. Other key economic data include US personal income and outlays, ISM Manufacturing PMI and construction spending; Eurozone business survey and inflation; Japan consumer confidence and industrial output; and Australia inflation data.

Summary: Sentiment powers through neutral and into bullish territory while markets pause their recovery efforts. Sentiment is now back to late January levels for all market we track except for the UK where it is back to its February highs. Markets, meanwhile, were flat to slightly lower last week. This divergence means that as positive confirmation bias built-up among investors, the lack of strong positive news last week did not provide a trigger for this cognitive bias to turn into (buying) action. Negative news (and there was some), was downplayed as it did not confirm investor’s expectations, which resulted in a flat market (i.e. no trigger for selling either). Investors feel bullish, and they will be looking for a trigger to buy in this week’s news flow (see above). Failure to get the anticipated trigger will simply make them wait another week. At this level, it will take truly negative news to make sentiment and markets turn south.

Sentiment in the US recovers January levels but lacks a news trigger to affect markets?

Sentiment in the US is back to the level it was in late January and just poised to enter bullish territory once again. This continued improvement in sentiment follows both signs that the lockdown measures are having the desired effect on the spread of the coronavirus as well as confirmation of impending re-openings in some states.  For the second week in a row, however, markets continued to pause and catch their breath after a 30% climb since the March 23 low.  This divergence comes from a lack of trigger to turn rising risk tolerance into buying action, while the negative news is a trigger only for the now minority of still risk averse investors. This has the effect of making the supply of risk only slightly larger than the demand for risk, not because there are more risk averse investors in the market than risk tolerant ones, there are less in fact, but because the majority of the risk tolerant investors have not seen a confirmation of their positive bias in the news flow these last two weeks and have therefore simply stayed home. Risk averse investors have therefore been able to continue to de-risk their portfolios by offering only small discounts for their risk assets. 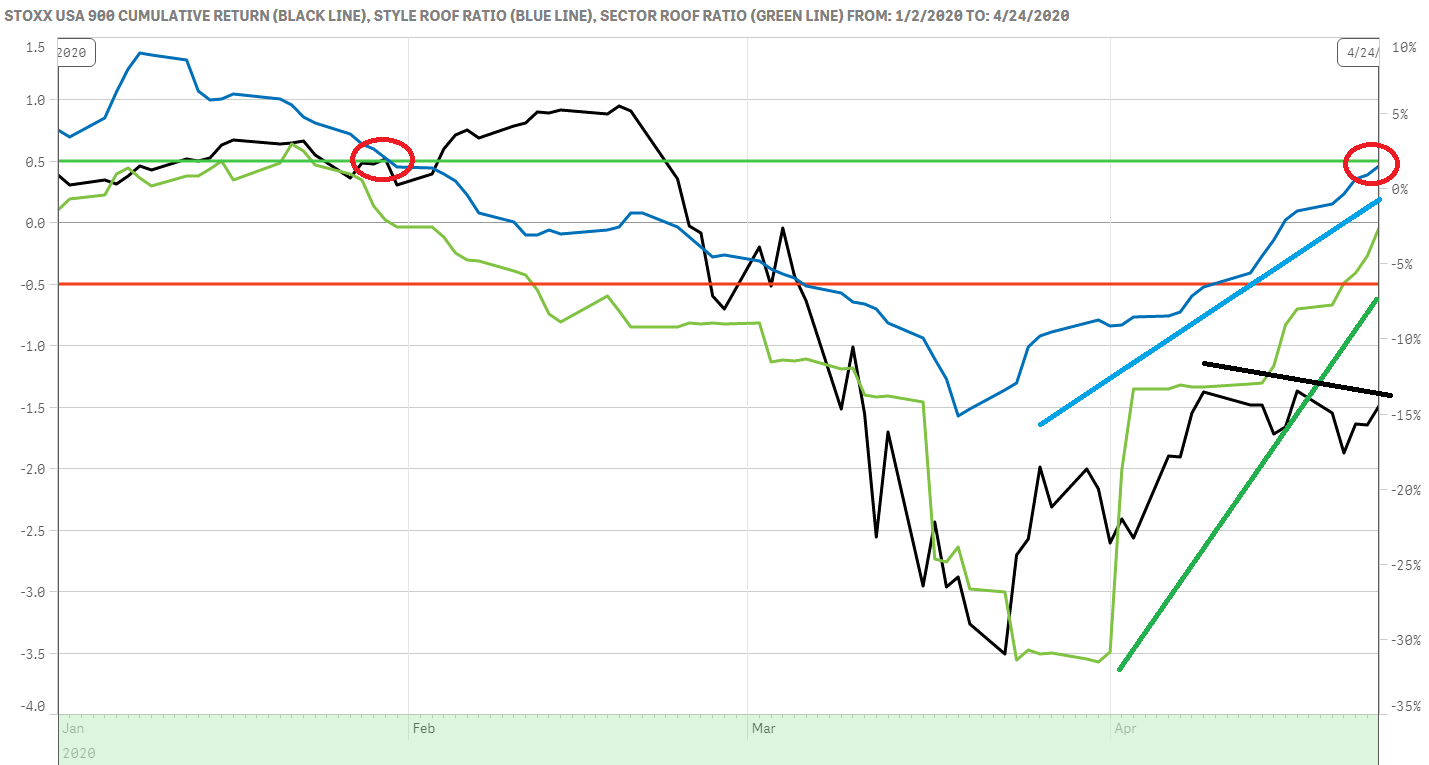 The news this week will determine if sentiment continues to improve or flattens. Positive news on the pandemic, earnings and guidance, economic data, and clarity on the reopening proceedings, will become a trigger for the dominant risk tolerant sentiment. In this scenario, the now minority risk averse investors will be offered premiums to sell their risk assets to the multitude of risk tolerant investors wanting to acquire them (i.e. why markets rise). Conversely, worse than expected, or simply negative news, depending on how negative, will continue to be a trigger for the minority risk averse investors while keeping those still risk tolerant at home, resulting in a third week of divergence between markets and sentiment. Prolonged divergence is not sustainable in our experience so something will have to give by the end of the week.  Successive negative news will turn sentiment around, positive ones will act as a trigger for the risk tolerant majority while the risk averse ones stay home, leading premiums to be offered for risk assets as demand outstrips supply forcing markets to realign with sentiment. The reverse, of course, is also possible …

Sentiment in Developed Europe continues to be the most positive of all markets we track.

Investor sentiment in developed Europe is now firmly into bullish territory for our style-based ROOF ratios and soon to be for our sector-based ones. This continued positive confirmation bias is now well ahead of markets, creating a divergence similar in size to the one we experienced in February, albeit in reverse. The pandemic curves for western Europe do look attractive as the number of daily new cases continue to slow. This, together with the promises of more stimulus and the actual reopening of several economies was enough to boost sentiment these past two weeks.  Market, however, have paused as despite the diminishing number of risk averse investors since March 23rd, the news flow these past two weeks has not provided a trigger for the many risk tolerant ones to step into action after their recent buying spree. 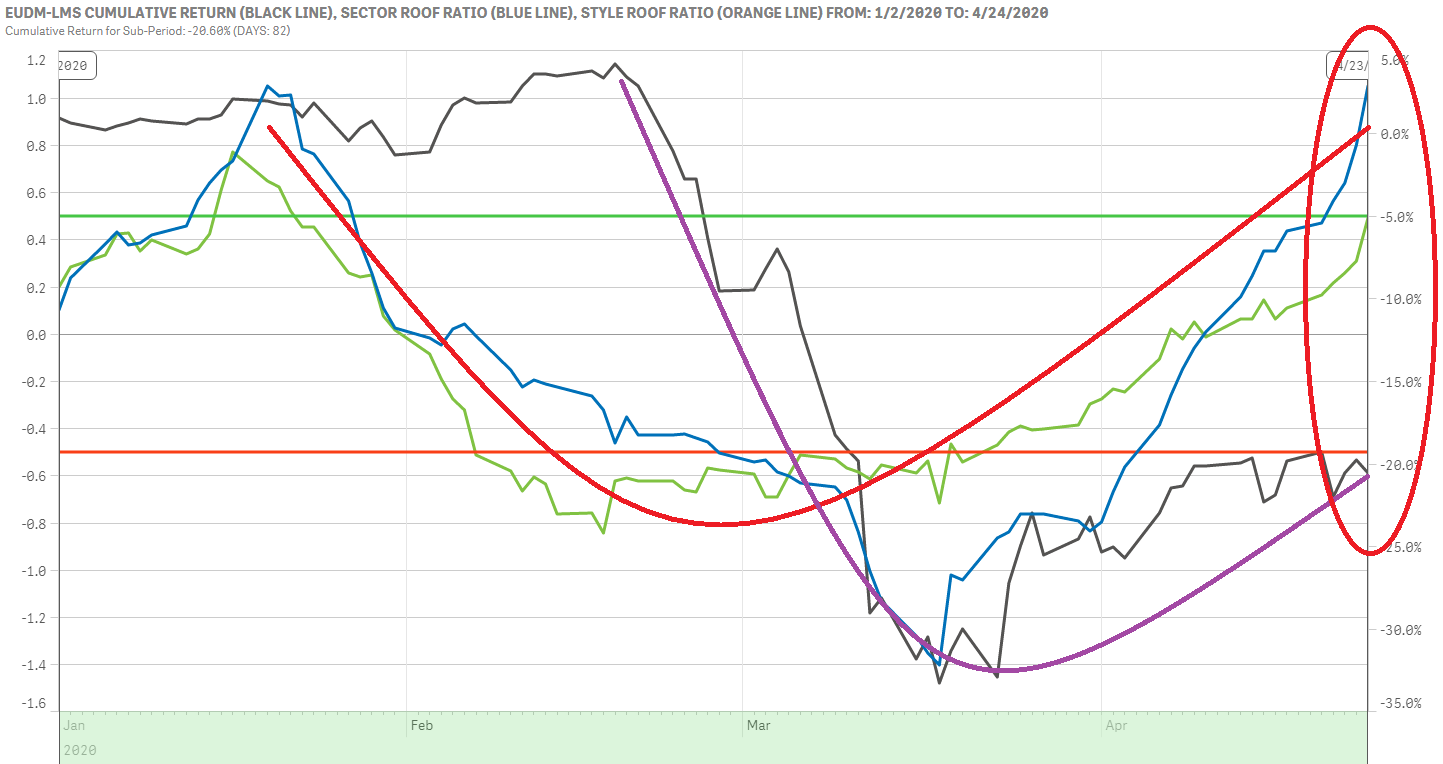 The divergence between sentiment and market returns in developed Europe is now much larger than in the US as sentiment became more positive faster there and markets only recovered half as much as in the US. Europe needs to see positive developments out of these reopenings if it is to trigger the many risk tolerant investors into action. Realistically, however, it will take several weeks for failure in the form of a second wave of rising daily cases to emerge from reopened economies. During this wait, it will be up to CEOs and central bankers to come up with a trigger for risk tolerant sentiment to turn to action (i.e. buying).

Honestly, four weeks is a long time to wait in an uncertain environment where volatility makes the cost of being wrong very high.  The most likely scenario here is that this divergence shrinks over time as markets slowly rise given diminishing risk averse investors and some impatient risk tolerant ones pull the trigger on their buys.

Investor sentiment in both global developed and Asia ex-Japan are bullish; markets less so.

As in the US and Developed Europe, sentiment in global developed and Asia ex-Japan markets continued to climb reaching bullish territory for at least the style-based ROOF Ratio. Markets there also paused after their recent rebound from the March 23rd lows, creating a divergence between sentiment and market performance.  In these markets too, a trigger is needed to turn positive bias into action. 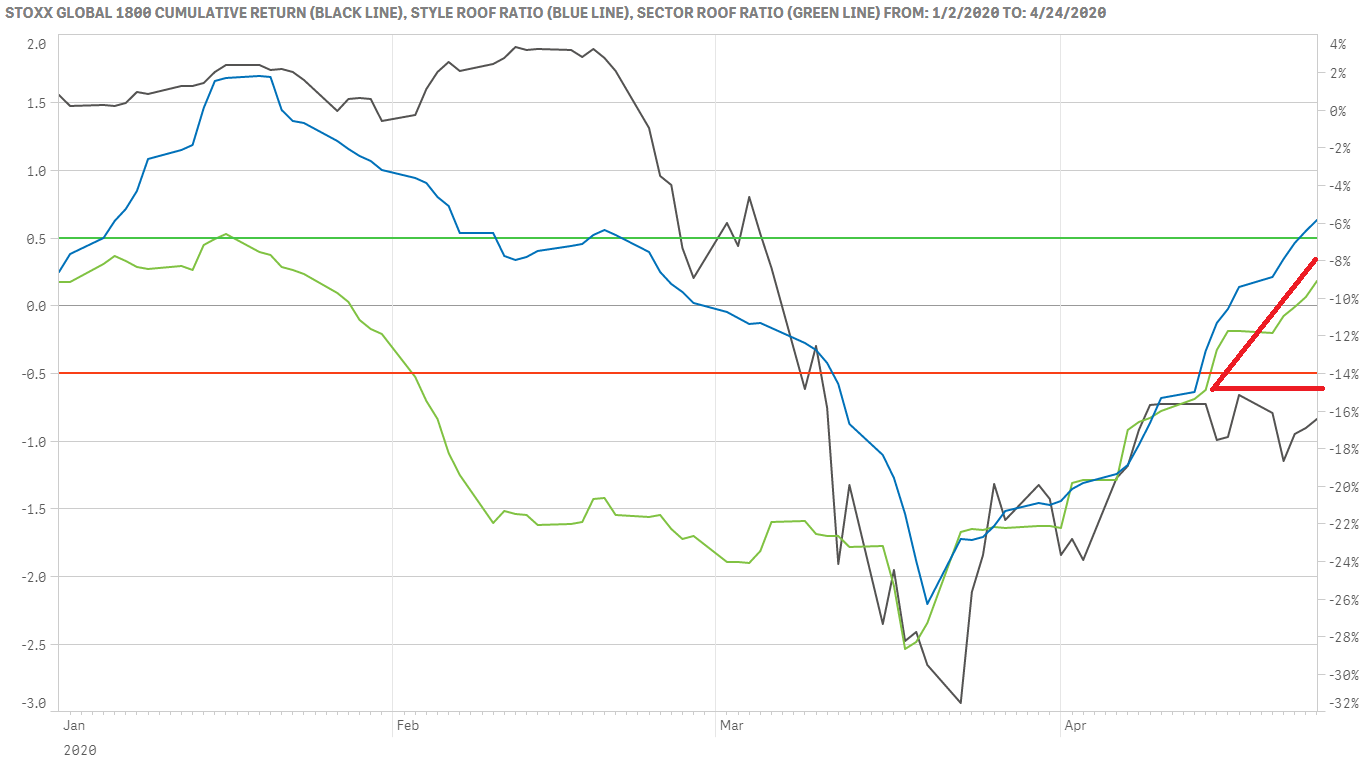 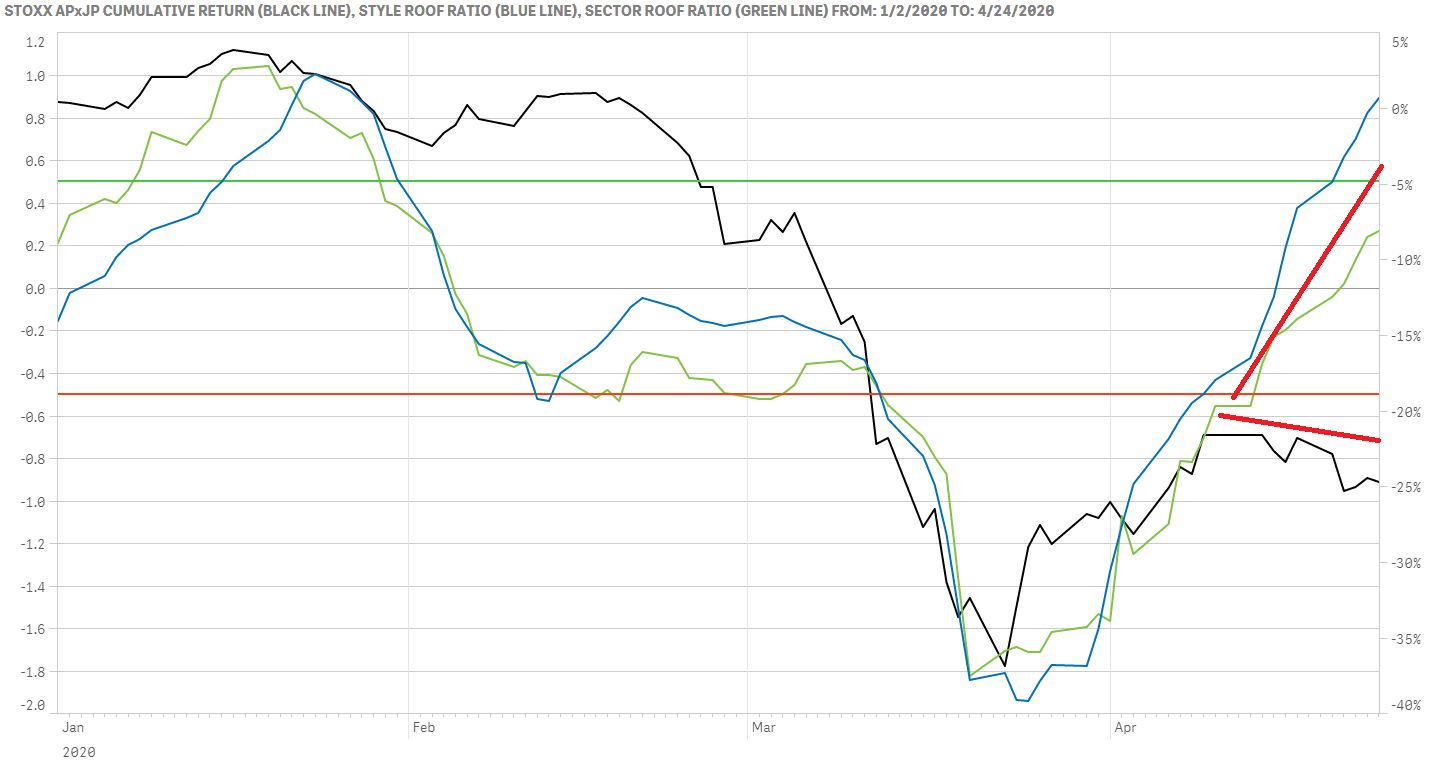