Potential triggers this week: US non-farm payrolls expected to rise by over 1 million in August and unemployment rate below 10% for the first time since April. Other releases include trade figures for the US, factory orders for the US and Germany, industrial output, and retail sales for Japan.

Summary: For 90 consecutive days now, investors the world over have been strongly bullish (thank you Mr. Powell). This is significant on two counts. First, this is by far the longest stretch any single market has been bullish (the previous record was 79 days). Second, this is the first time in our ROOF history (going back to 1997) that all major markets (except China) are bullish at the same time and for that long. As economic uncertainty post-pandemic rises, it seems investors have all reached the conclusion that the safest place to invest, is right behind the Fed. This past week, sentiment in several markets declined, seemingly headed for the neutral zone. The US has been leading the way so far this year, peaking in early January, bottoming out on March 19, and then having peaks and troughs within the bullish zone for the last 90 days, all of which were mirrored by the other markets shortly thereafter. Last week, the US ROOF Style Ratio dropped below the Bullish zone and into the Neutral zone for the first time in 90 days (see last week’s note). The US Sector ROOF Ratio variant weakened significantly as well despite remaining in the bullish zone for the time being. The two sentiment variants have a very strong correlation of 0.92 (on a rolling 12-months basis) and the Style ROOF usually leads the Sector ROOF by a week or two. The decline in the US Style ROOF variant since July 13 has been giving a warning signal since August 18. The US Sector variant is now confirming the same warning signal as of July 27. If no (strongly) positive news comes out to lift sentiment, an increasingly negative cognitive bias will make investors more sensitive to negative news and prone to over-reaction on the downside, especially in markets without profit-taking to restrain them (i.e. if news causes downward revisions in expected returns, cut your losses now).

Both ROOF Variant (Style and Sector) now show a warning signal in the US.

The Style ROOF ratio has dipped into neutral territory after falling to 0.40 (below the bullish cutoff of +0.5 – horizontal green line in chart below)) during the last two days of last week.  Additionally, it has now fallen by more than 0.5 since the mid-July high and triggered a Sell signal for nine consecutive days since Tuesday August 18 (see last week’s highlights, page 2).  The Sector ROOF ratio is a week behind its Style ROOF peer and registered a greater-than 0.5 decline since its recent July high on Thursday of last week, triggering a Sell signal for the last two days (see chart below).

Both US ROOF ratios are warning that sentiment has weakened enough recently (within last 20-days) to become more sensitive to negative news, as investors have lost the positive cognitive bias which allowed them to ignore negative news until now. This week sees the US Job report for July and a miss there given the weakening sentiment could trigger a wave of profit taking, especially with social unrest and domestic political theatrics in the background (both negatives for investor sentiment).

Note that unlike other markets, US investors are sitting on YTD profits and that the ROOF Ratios are only entering the Neutral cognitive zone, not the bearish one. This means that although investors seem to have recently lost their optimism, they have not yet become pessimistic. In the neutral cognitive zone, sentiment will let itself be shaped by the news and events unfolding during that time without over-reacting to them as they would when sentiment is in the bullish or bearish zones. The most likely near-term scenario for the US market, therefore, is a bout of profit taking as investors seek to protect their YTD performance ahead of a historically more volatile Q4 that will see increased uncertainty this year due to the US Presidential Election. 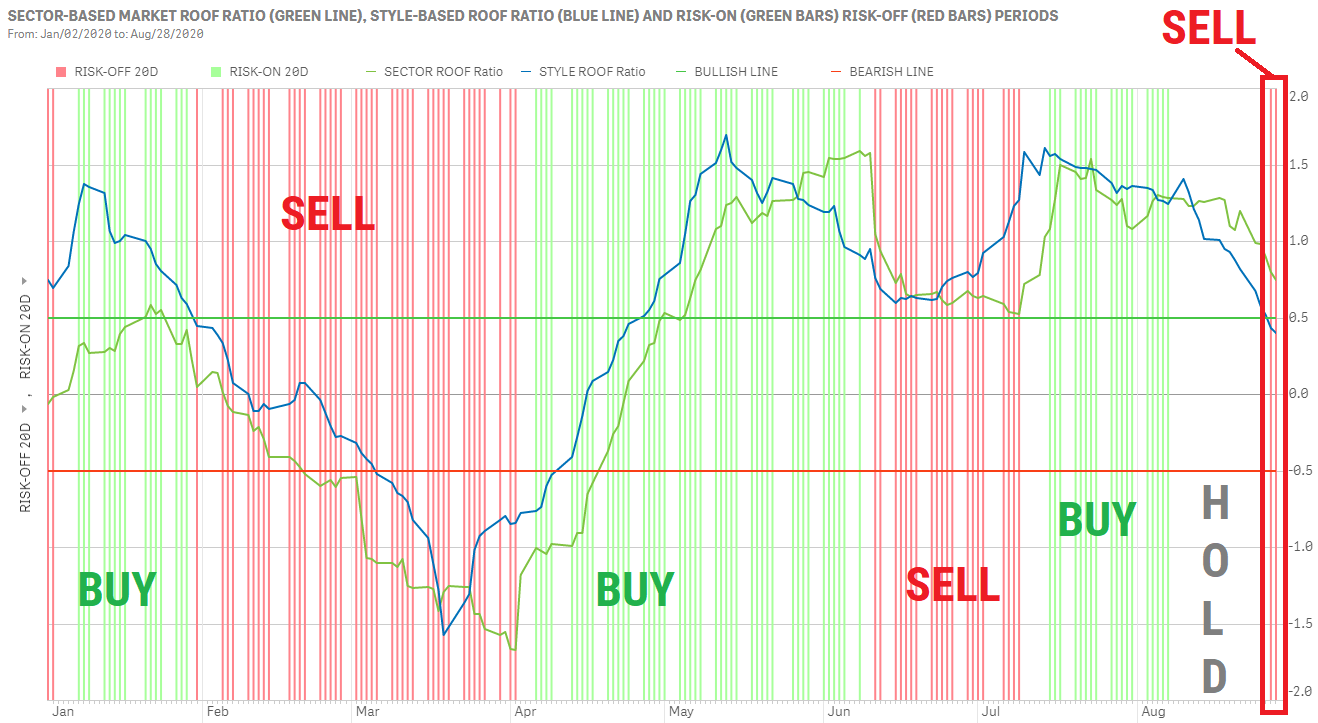 Developed Europe sentiment remains positive, but change may be lurking under the surface

Sentiment in Developed Europe remains upbeat and supportive of higher (still) market levels. The optimism gained on the back of the huge stimulus package announced in July has not yet ran out of steam. Both ROOF ratio variants are comfortably within the Bullish zone (above +0.5) and seem to try and nudge markets higher, without much success so far (i.e. YTD returns is still -10%, top chart).

Risk-tolerance (green line in bottom chart) reached a YTD-high in mid-July on the announcement of the stimulus package and has regained strength recently. Risk-aversion (red line in bottom chart), meanwhile, has been basically flat-lined since the announcement and is even drifting lower as investors make the bet that any further deterioration in the economy resulting from the Covid-19 pandemic will be met with further stimulus by the ECB and the EU. In other words, they seem happy to sit on risk assets and wait for the economy to catch up. Given negative yields in that part of the world, there does not seem to be anywhere else to go. The EU does not benefit from having tech giants in its ranks to lift its market, unlike the US, and still has a post-Brexit trade deal to negotiate. But for now at least, European investors seem content to wait-and-see and are doing so with an upbeat pre-disposition on the future.

Sentiment and markets diverge in both global developed and Asia-Pacific for second week.

Sentiment in global developed markets declines for a second week in a row but remains in the bullish zone (above +0/5, horizontal green line in top chart). Since sentiment is still largely upbeat, markets have decided to ignore it but both ROOF Ratio variants are now flashing a warning signal as sentiment has weakened by more than 0.5 in the last 20-days. Unlike its European counterpart, risk-tolerance has been weakening and risk-aversion rising for global investors. The demand for risk is still stronger than the supply but that balance is weakening daily, in line with that of the US market.

Sentiment in Asia-Pacific ex-Japan is also diverging from market returns but shows disagreement across our two variants. The Style ROOF Ratio – the more volatile of the two given the diversity of that region – rebounded last week while its Sector ROOF peer continued to weaken and even crossed over into Neutral territory. Risk-aversion levels are as high as they were in early June for both but the Style ROOF saw its level of risk-tolerance suddenly rise last week with eight out of our ten metrics pointing to a higher risk appetite. Markets are still down 5% YTD despite sentiment having been bullish for over 90 days, can they still climb if volatility rises and sentiment falls further?