Summary: As the coronavirus outbreak continues to spread outside of China, investors are beginning to feel like this time it is different (than SARS). Sentiment remains firmly in the neutral zone for all markets with Japan the first market to slip into unsupportive territory. Equities look out of synch with investor sentiment as most of the risk aversion buying occurred in other asset classes. The first batch of coronavirus-impacted economic releases will shape sentiment in the weeks ahead with Japan, Europe, China, and Asia ex-Japan (the most coronavirus-affected countries) leading the rising risk aversion trend.

Sentiment in the US remains neutral (undecided) and the ROOF Ratio has been flatlined around zero for three consecutive weeks now looking increasingly anxiously and quizzically at a rising market while waiting for direction.

US ROOF Ratios have hovered around zero for three consecutive weeks now and are forecast to remain in this state of indecision for another week (see forecast blue line below). A neutral ROOF Ratio means that investors are free of either a bullish or bearish confirmation bias. In this state of indecision, news will first shape sentiment, then investor reaction. If the news this week around the impact of the corona virus outbreak is negative, this will drag sentiment into bearish territory creating a higher supply of risk assets than demand for them and leading more numerous risk averse investors to offer large discount to fewer risk tolerant ones in order to de-risk their portfolios.

Even without further negative news (and in the absence of positive ones), sentiment is projected to continue to weaken slightly this week based on the trend for the last 40 days. Negative news, especially unexpected one, can drive sentiment to the unsupportive zone very quickly from these levels as it is currently free of confirmation bias either way and waiting to take direction from news flow.  In this state, especially after two consecutive weeks of seeing markets ignore rising risk aversion levels, there is more downside risk than upside potential. In this light, a neutral sentiment for the past three consecutive weeks should not be interpreted as indifference from investors but instead that uncertainty levels are so high that they can’t make up their minds. Cometh the bad news, cometh the panic … 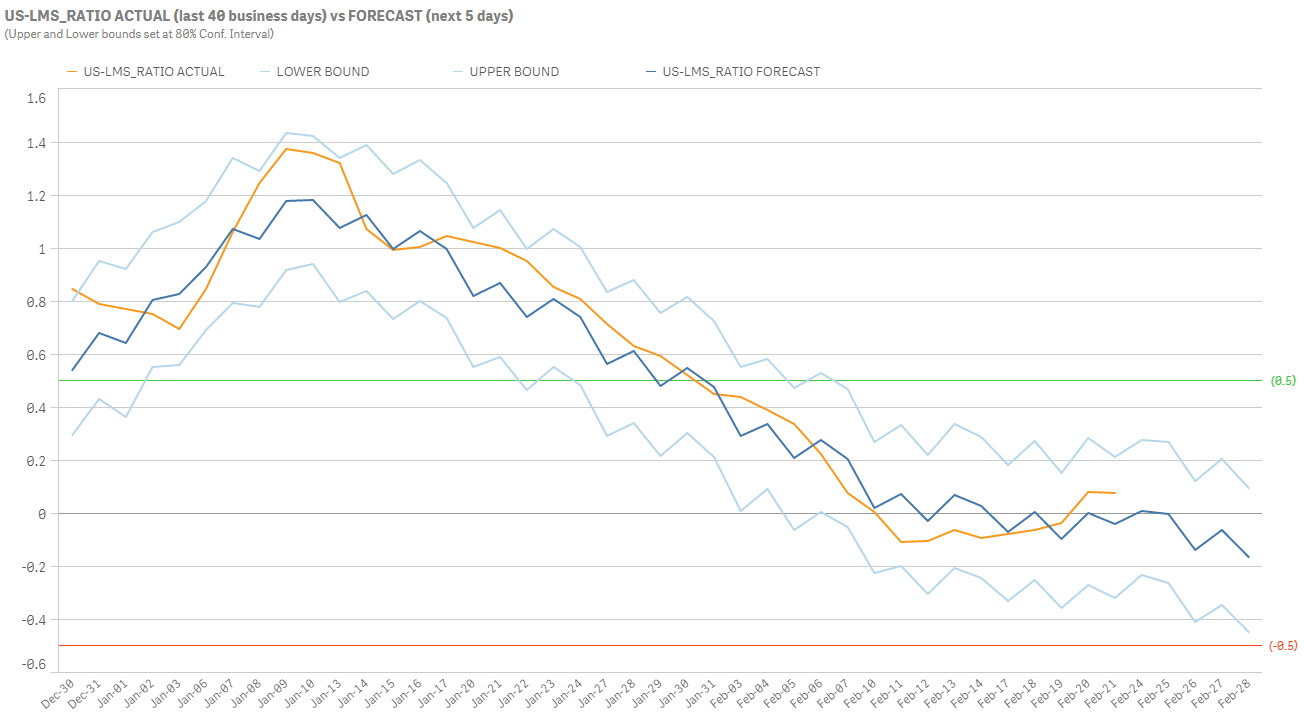 Sentiment in Developed Europe continues to weaken and is now dangerously close to unsupportive territory. Markets have ignored this rising risk aversion since the start of the month.

Sentiment in Developed Europe has been weakening from a high reached exactly one month ago.  Markets, meanwhile, after initially reclining in line with sentiment have since been on the rebound, reaching new highs last week in defiance of rising risk aversion levels.  The ROOF Ratio ended the week at -0.43, dangerously close to the unsupportive levels of <-0.5 and is forecasted to cross that line this week (see bottom chart below).

Given that the market is up 4.2% this month alone, there may be quite a lot of downside risk going forward as the imbalance between risk tolerant and risk averse investors in the market continues to increase.  Below a -0.5 reading, that imbalance allows the much fewer risk tolerant investors left in the market to extract large discounts from the many more risk averse investors wanting – or needing – to de-risk their portfolios by selling risk assets.  In this situation, further market upside looks decidedly against the odds.

Markets in China (like many others) have ignored rising risk aversion levels in favor of hopes for further monetary stimulus. Investor sentiment, however, is projected to keep declining this week.

Markets in China have responded positively to the promise of further stimulus by the BoC but sentiment continues to paint a worrying picture with risk aversion levels rising faster than risk tolerance levels are coming down (i.e. the degradation in sentiment is driven by rising fear, not declining greed levels). This is important because in our research for the ROOF Score methodology, we have observed that investors respond more quickly to their fears than to their greed, meaning that rising risk aversion is a bigger trigger for a selling behavior than rising risk tolerance is for a buying one.

With this in mind, and the past three weeks of denial by markets in the face of rising risk aversion, there may be a lot of downside risk if the narrative surrounding the coronavirus outbreak continues to be negative and current stimulus measure are seen as insufficient.