In the news this week: In the US, January’s job report Friday, ISM PMI surveys, foreign trade balance, construction spending, factory orders and Trump’s acquittal by the Senate on Wednesday. Central banks in Australia, India, Brazil and Russia will be deciding on interest rates. Germany factory orders, China trade balance and Caixin PMIs and Hong Kong GDP. (From: https://tradingeconomics.com/)

Summary: The ROOF Ratios1 (left chart) which are computed over the last 20-days show continued decline in the support for higher market levels with both the UK and Japan turning unsupportive. As the daily ROOF Scores (right chart) indicate, this sentiment is set to continue to weaken as the daily scores ended last week in negative territory for all markets we track on the back on the coronavirus worries.

Sentiment in the US has continued to decline this past week falling into neutral territory and is no longer supportive of higher market levels – although it isn’t unsupportive either.

The slow decline in sentiment from its peak at the start of December accelerated last week and is set to continue in the same direction. Investors had been supportive (a ROOF Ratio above 0.5) of higher market levels since November 11, 2019 but that support peaked in early December and started to decline, although remaining above the supportive level of 0.5. The ROOF ratio staged a short-lived rebound from this declining trend in early January but then resumed its downward trend mid-month and ended last week in the neutral zone at 0.4, just below the supportive level of 0.5.

Using PROPHET, the time series forecasting algorithm made openly available by the data science team at Facebook, we predict the ROOF Ratio for the next five days based on the preceding 45. In the charts below the orange line is the actual ROOF ratio for the past 45 days.  The blue line represents the prediction from PROPHET2. The green lines represent the 80/20 upper and lower confidence bounds around our forecast.

As we can see, PROPHET gives us a pretty good fit during the learning phase and predicts a continuation of the downtrend in sentiment for this week in the US with the ROOF Ratio falling deeper into the neutral zone ending this week (Friday February 7th) completely undecided at just 0.2.  Given the absence of market-moving data releases this week3, sentiment direction will continue to take its cues from the development of the coronavirus global health crisis.  With sentiment ‘turned off’, we should see a ‘rational’ market this week moving in a tight range. 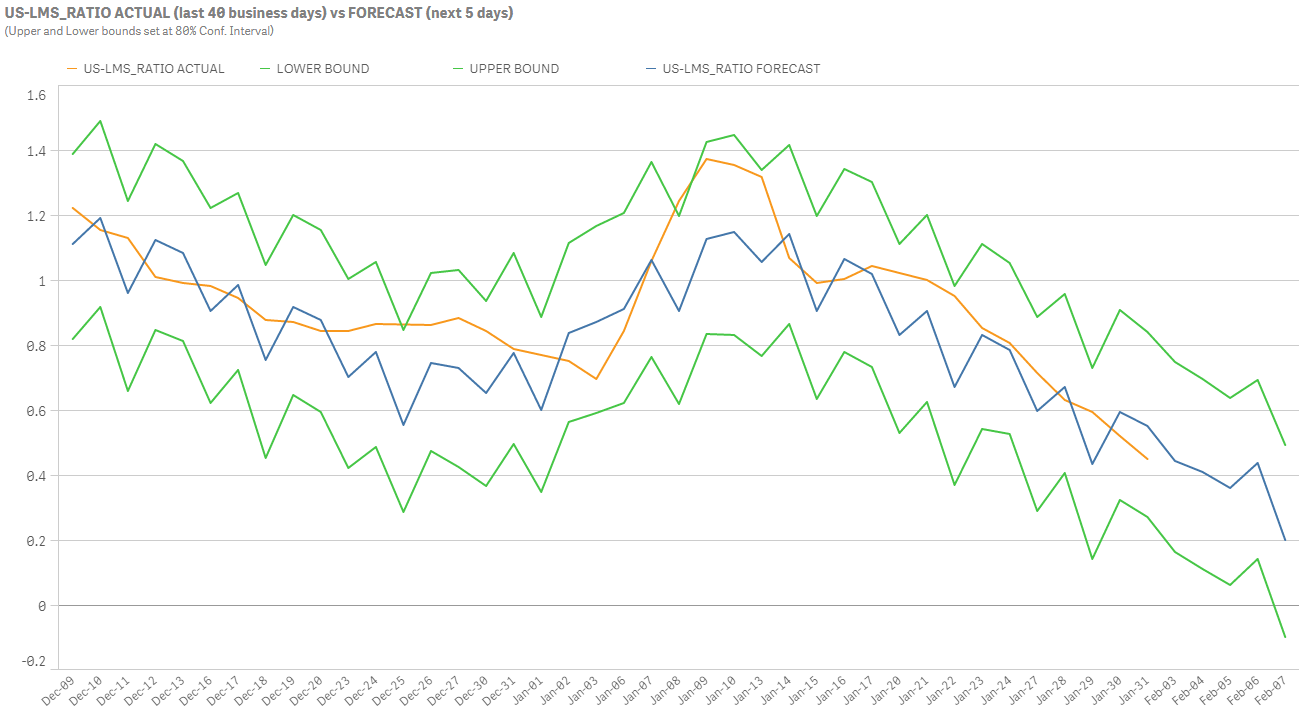 Sentiment continues to weaken in Japan crossing into unsupportive territory at the end of last week.

Investors in Japan went from being strongly supportive of higher market moves in December, with a ROOF Ratio above 1.5 for most of the month, to unsupportive now at -0.7.  Chinese tourists are a vital source of economic growth for Japan and the travel ban imposed by the Chinese authorities since the start of the year is already causing many analysts to revise their full year earnings projections which is affecting sentiment.

Applying PROPHET to this dataset we forecast sentiment to flatten around -0.5 level in the next five days. While this may seem like an improvement from the sharp downtrend since the end of 2019, a ROOF Ratio of -0.5 is unsupportive of higher market moves and more supportive of lower ones.  Given this negative bias, the market is vulnerable to an overreaction on the downside should a negative surprise hit the wires confirming investors’ bearish mood.  Since there is nothing on the Japan economic data release calendar for this week, it will be up to the coronavirus and or President Trump to pole that bear. 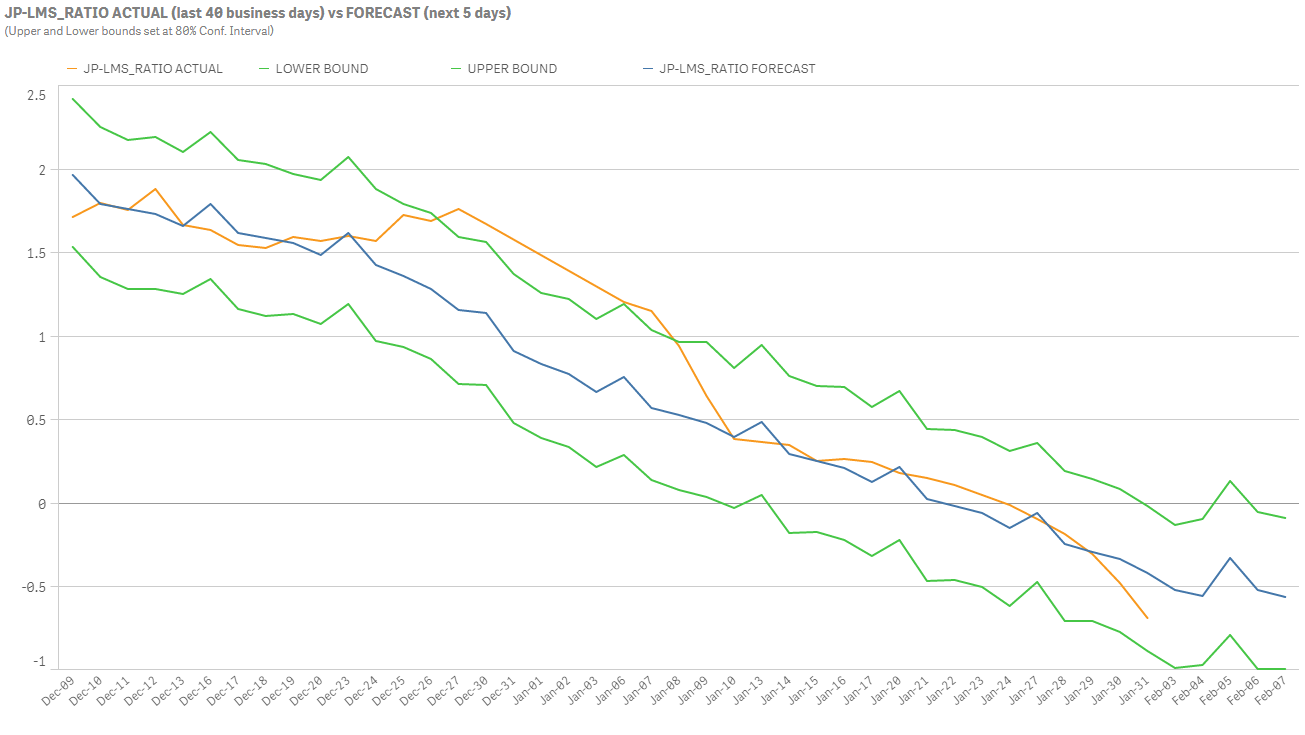 Sentiment in the UK is has been on the rebound from its lows of late 2019 but seemed to retrace part of its recovery last week in the face of negative news on the coronavirus and the Brexit deadline, to end on the negative side of the neutral zone.

Sentiment in the UK was on a firm recovery path after hitting a low pre-Christmas. The ROOF Ratio seemed to be headed for positive territory two weeks ago but ended last week at -0.3.  Applying the PROPHET algorithm to this recovery path still predicts a continued recovery with a ROOF ratio ending this week into positive territory at 0.2.  This remains in the neutral zone and a far cry from the strongly supportive levels seen post-election results in November last year when the ROOF Ratio reached a high of +1.5.

A ROOF Ratio this close to zero means that investors do not have a strong view one way or the other and are therefore free of confirmation bias.  In this situation, any news release, positive or negative, is not seen as either a confirmation or repudiation of their investment thesis and they are likely to react mutedly at first.  Sentiment needs to be given direction before it can influence investor’s decision making, so from here, news comes first (as always), then sentiment changes (up or down), then investors over-react (based on confirmation bias).  So, for now at least, Brits are keeping calm. 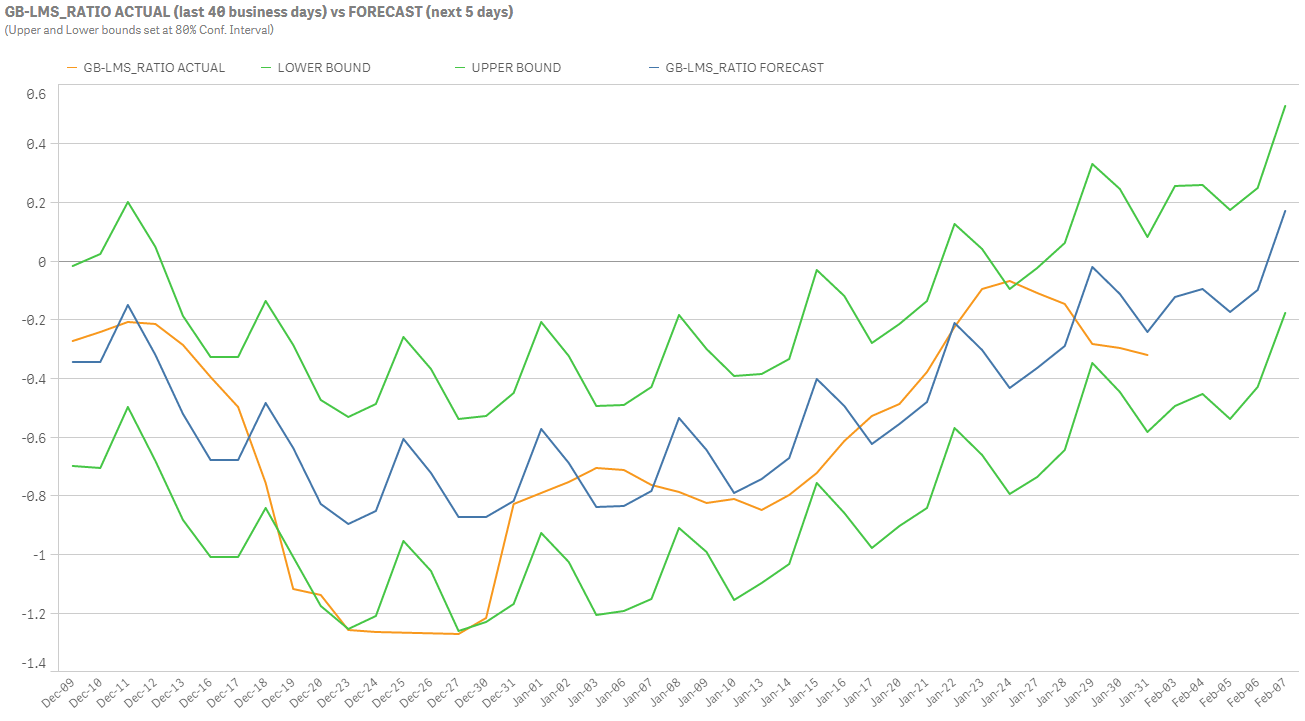