In the news this week: Trade negotiations will be in the spotlight next week, as Beijing sends a delegation to Washington for a three-day visit to sign the so called “Phase One” deal with the US. Meanwhile, key economic data to follow include the US inflation rate, industrial output, retail trade and Michigan consumer sentiment; China Q4 GDP and trade balance; and UK monthly GDP, retail sales and inflation figures. (From: https://tradingeconomics.com/)

Summary: Welcome to the first full week of 2020. With more normal trading conditions for a full week, investors seem to have started 2020 carrying over the optimism they had at the end of 2019. The Trump-Xi bromance is back on, but the Trump-Kim one is definitively on the skids. Since the former has a greater impact on the global economy (by far), sentiment is most positive on those economic-sensitive markets where industrial production had fallen the most in 2019 and are seeing some re-rating for 2020.

Introducing the ROOF Ratio for all markets.

Now that the noisy data of the holiday season is behind us, it is time to think about ways to make sentiment indicators a bit less emotional and more informative.  Over the holidays we have been applying several machine learning algorithms to our history of ROOF scores – all will be revealed in an upcoming paper (February). As part of this research, we will be introducing the ROOF Ratio.  This metric is simply the average ROOF Score for the last twenty days divided by the standard deviation for that period.  Essentially it answers the question – how much confidence can we assign to the current change in sentiment given how often investors have changed their minds in the last twenty trading days.

The long-term average for the ROOF Ratios is zero and any time it gets above or below +/-0.5, it starts to get significant (i.e. we can trust the current trend in sentiment).  The standard deviation is +/-0.8.  Below is a chart for 2019 and YTD-2020 for the US market. We can clearly see two period of meaningful increase in risk appetite in Q1 and again in Q4 while most of Q2&3 were spent in relative indecision. 2019 was a convincingly positive year for the US market with an average ROOF Ratio at 0.43. The average for Q1 & 4 was 0.85 and 0.47 (0.95 for November and December) respectively. During Q1 the US market rose by 14% and in Q4 by another 9%. By contrast the average ROOF Ratio for Q2 & 3 was an inconclusive 0.18 and during that time the market ‘only’ managed a 5.5% rise. We also note that the market had its worst drawdowns in May and August (Q2 & Q3) and that both led the ROOF Ratio to fall below the -0.5 level.

Below are the ROOF Ratio charts for several other markets for the same period – Asia ex-Japan, Japan, 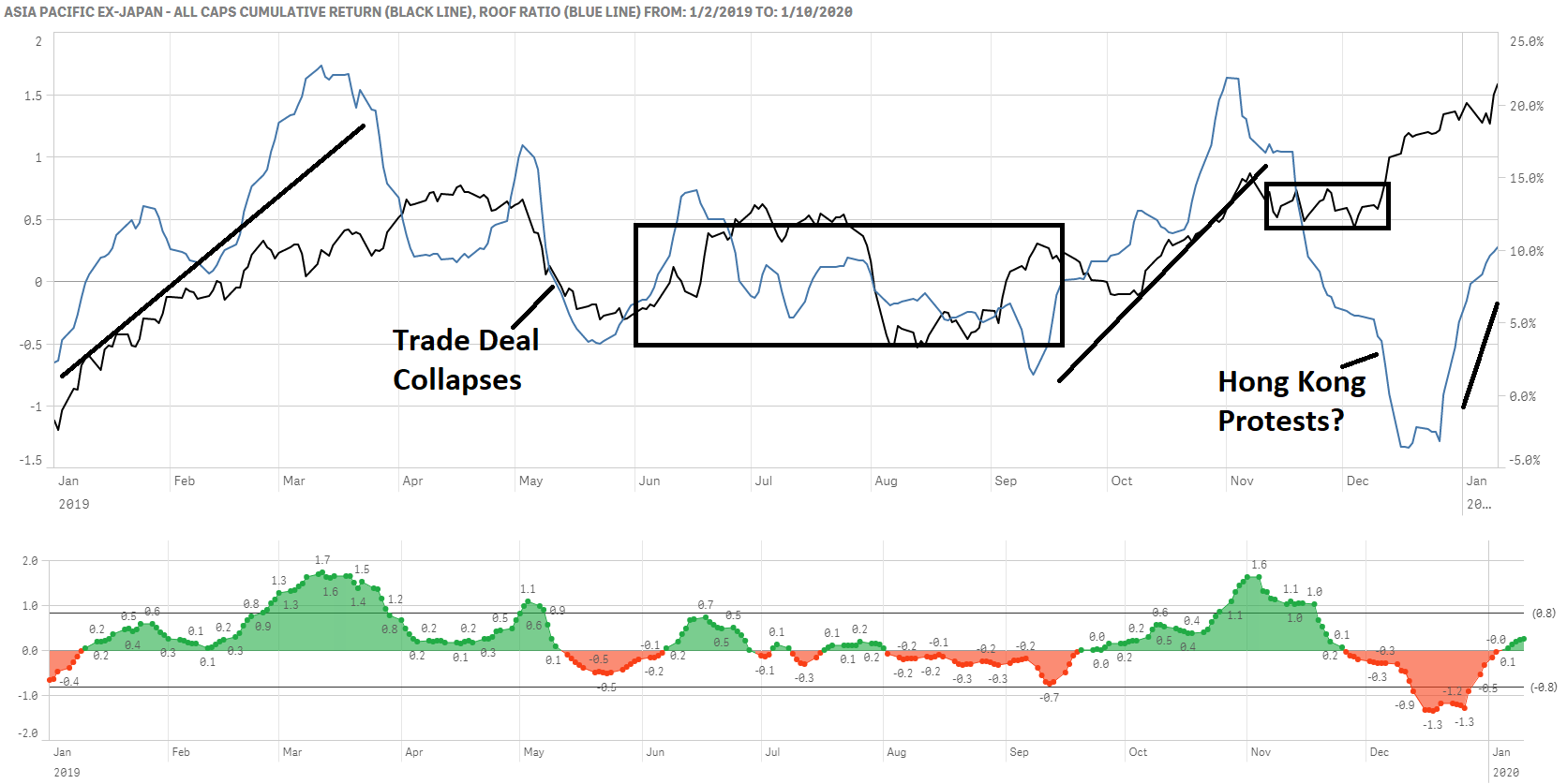 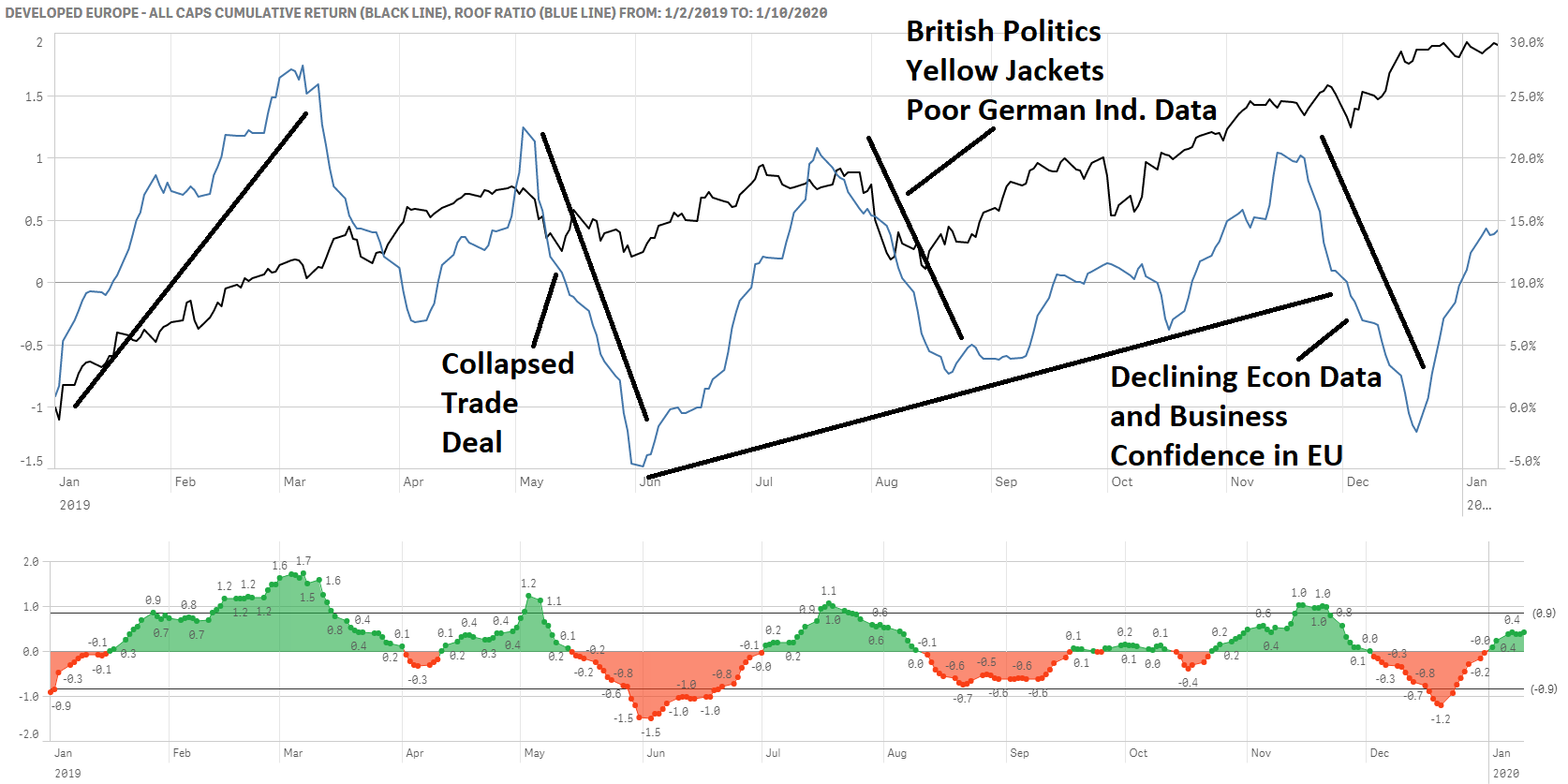 Then there is the ‘Not-So-Great Britain’ which danced to its own internal political beat in 2019: Average -0.02