In the news this week: US flash Markit PMIs, existing home sales and corporate earnings. Elsewhere, flash PMI surveys for the UK, Eurozone, Japan and Australia will also be in the spotlight, alongside UK unemployment and wage data; Eurozone consumer confidence; and Japan trade balance and inflation rate. The PBoC, ECB and BoJ monetary policy updates, and WEF annual meeting in Davos. And of course, the start of the Q4 2019 earnings season. (From: https://tradingeconomics.com/)

Summary: Stuck in neutral gear, investors are looking to each others for direction and hoping the incoming earnings season will provide some answers on where the economy, earnings, and the stock market are going from here. All nine markets we track ended last week in the neutral zone, within a whisker of each other, except for emerging markets who seemed a tad less risk averse.  I can just imagine the conversations …

US investor sentiment remains supportive of current market levels as well as its furtive consecutive stints above historical highs.  At 4.2, Risk Tolerance is just above its long-term average of 3.8, and Risk Aversion at 3.0 is just below its average of 3.5.  The ROOF Ratio[1] (see chart below) has now been above its supportive level of +0.5 since November 9, and at the current level of 1.04, seems to have some margin before it becomes unsupportive.  Still, we note that the signing of the US-China min deal was not enough for sentiment to beat the highs it reached in early December.

The Q4 and CY 2019 earning season is upon us and company-specific news are likely to dominate investor sentiment for the next few weeks (Senate impeachment trial dramas and the WEF in Davos not withstanding). Banks have already forecasted strong revenues from Q4’s trading environment while at the same time announcing layoffs. If the mini deal fails to turn the global economy around, we may be headed for another period where Wall Street and Main Street sentiment diverge.

For now, investor sentiment is positive which points to strong upswings for those companies with positive surprises and only weak downswings for those who don’t (i.e. investors are in the mood to reward, not punish). 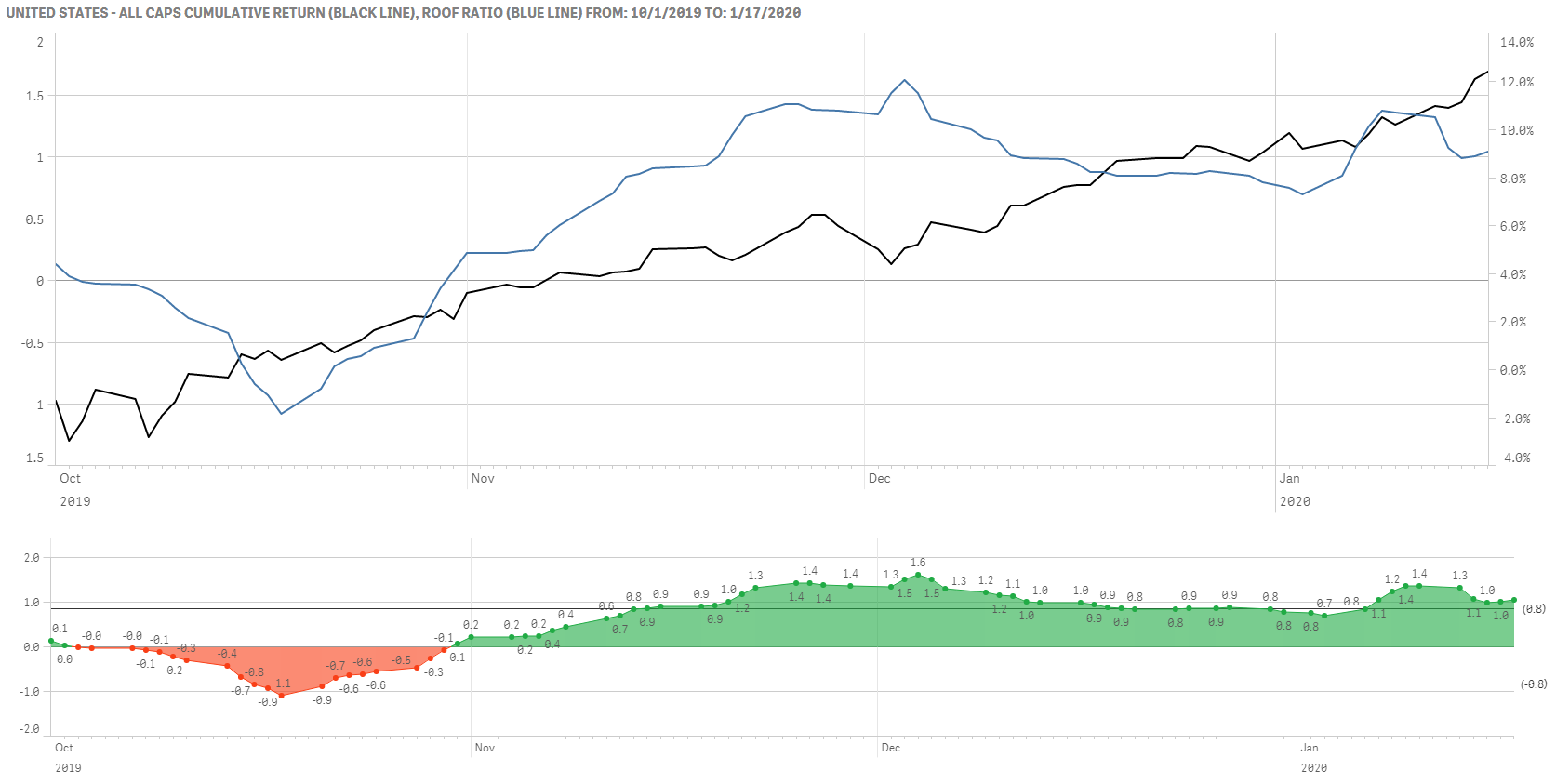 Investors in the UK have been unsupportive of the markets attempts at new highs but their (negative) resolve has weakened last week.

The UK ROOF Ratio last broke below the unsupportive level of -0.5 in mid-December and has remained under that level since then, only attempting to break back above it this past week, ending at -0.53. This lack of investor support has kept the UK market in a sideways trading pattern since then, but this could change if last week’s improving sentiment continues to gather momentum and crosses into positive territory.

At just +1.6% YTD, the UK market lags its peers who are all up about twice that since the start of the year.  If sentiment improves and crosses into supportive territory (i.e. >0.5), we could see a catch-up rally in that market.  But, as we saw in 2019, domestic politics and the lack of clarity around a post-Brexit economy still hang over investor sentiment.  As the January 31st deadline approaches, investors will want to hear more details about the timetable to negotiate a post Brexit trade agreement with the EU for them to become more supportive. 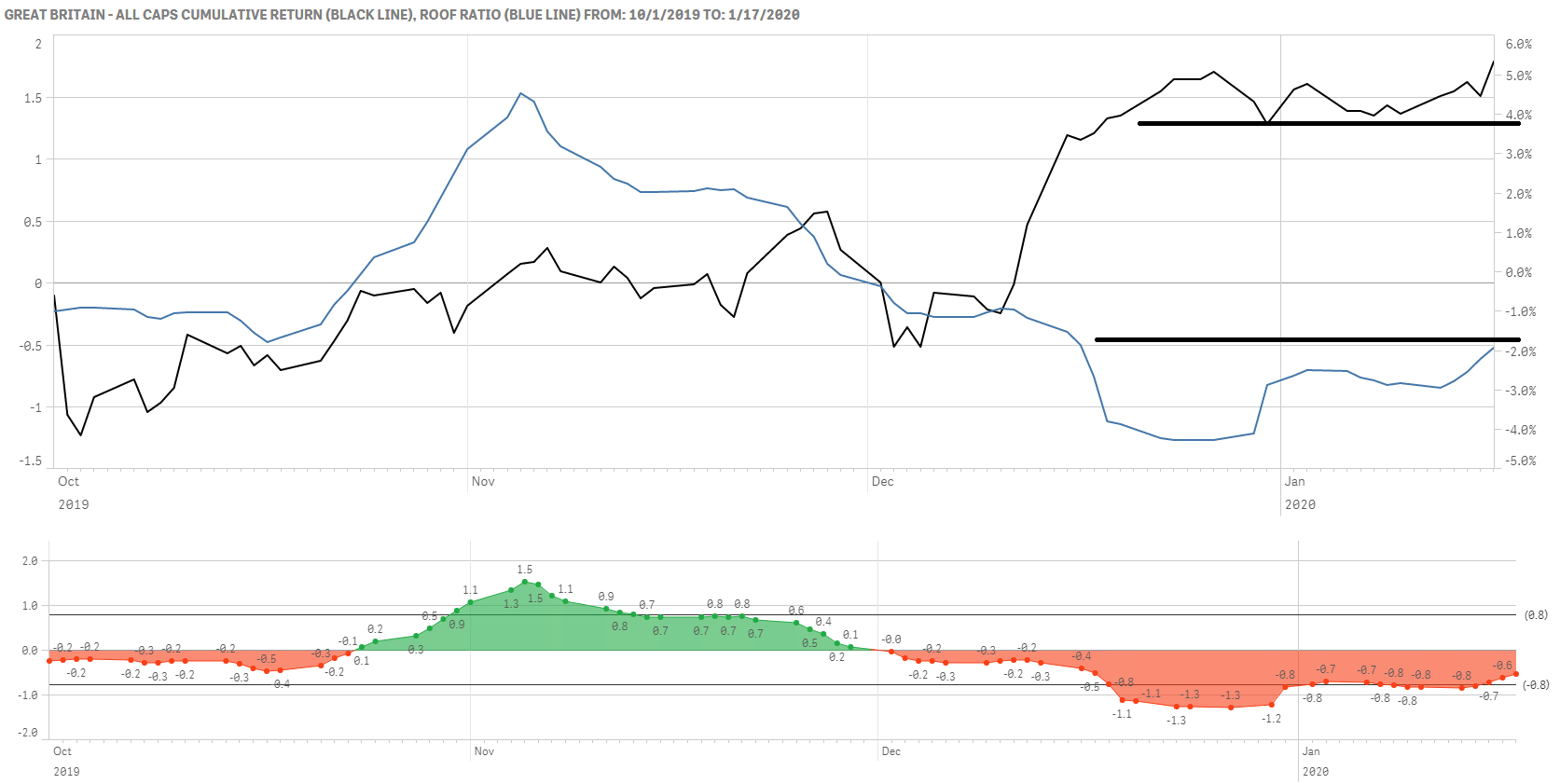 Like most markets, Asia ex-Japan saw investor sentiment improve at the start of Q4 but escalating violence in HK and a deteriorating regional economic outlook in the aftermath of the US-China trade war – now two years in the making – weighted on sentiment in December.  News of the mini deal and better-than expected retail data in the US seem to have been a confidence boost.  The ROOF Ratio for Asia ex-Japan has surged from a low of -1.3 on Christmas eve to finish last week in supportive territory at +0.57 leading the market to rise some 3.5% YTD, handsomely beating its peers, with only Australia (?!) and China doing better.

Since the start of August when this market started playing catch-up with the US, Asia ex-Japan is up some 12% in the face of deteriorating economic data.  If the recent surge in sentiment continues, this could point to a growing consensus that the region has hit bottom.  Falling sentiment, however, will point to this rally having been built on faith rather than facts. The earnings season will hopefully shed light on which way sentiment – and markets – go from here. 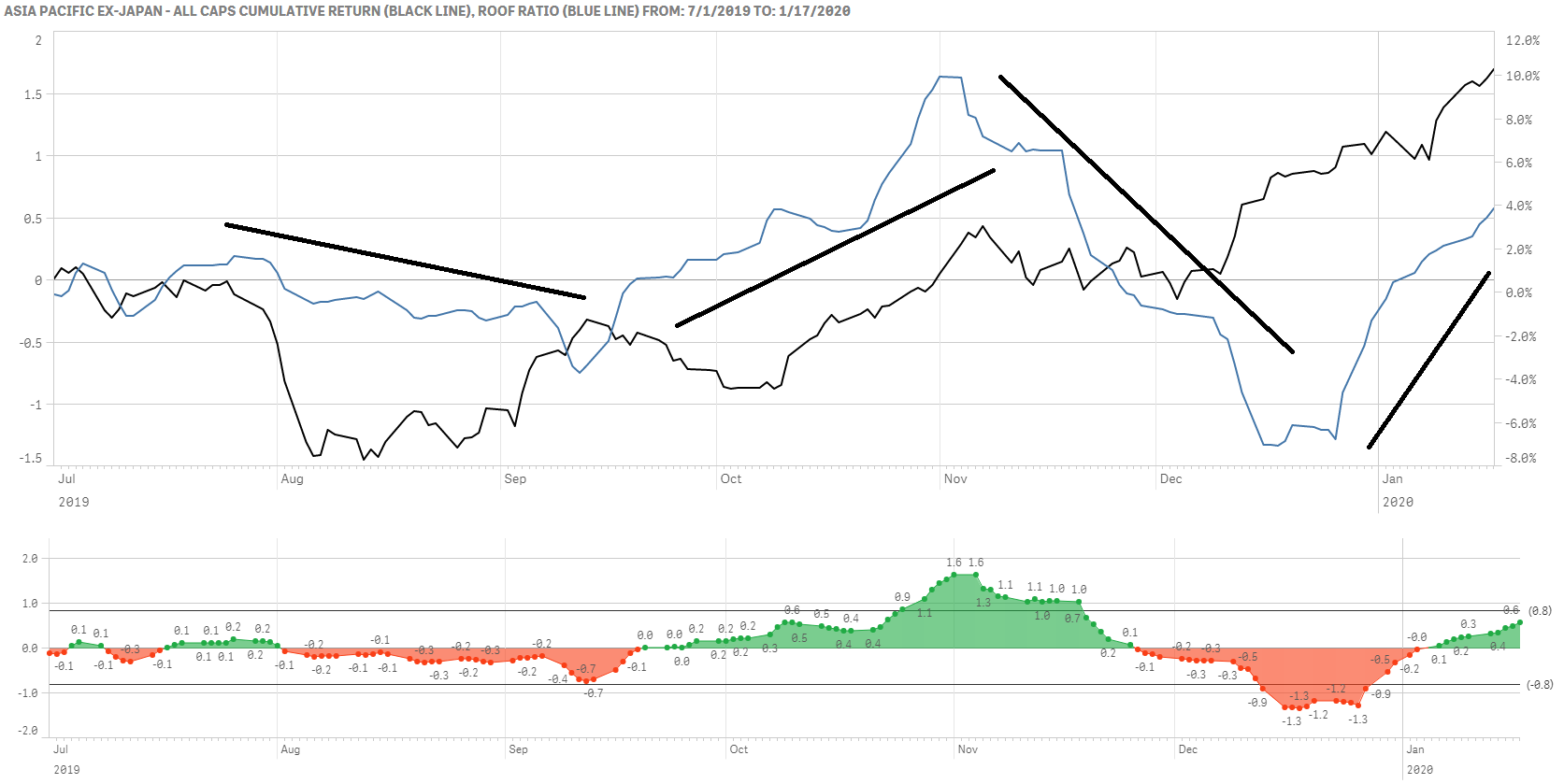 1. Average ROOF Score for the last twenty days divided by the standard deviation for that period.