Potential triggers this week: In the US, ISM PMIs, trade balance and factory orders, and the all-important jobs report for May on Friday. Consensus is for a payroll decrease of 8.25 million and a record-high unemployment rate of 19.7%. The ECB is seen keeping rates steady but will likely announce further stimulus. PMIs for China, the UK, Germany, Eurozone, and Japan. All of this during racial protests across 30 US cities, and a (fast) deteriorating geopolitical relationship between the US and China.

Summary: As the re-opening of economies turns to Asia, we see investor sentiment in those markets (Asia ex-Japan and Japan) continue to rise on strong momentum. Elsewhere, both sentiment and momentum, which had both gotten far ahead of market returns, are receding for the second week in a row, but (except China) remain in bullish territory as investors await economic data releases pointing (or not) to a V-shape recovery scenario. Economic data confirming (or denying) a successful recovery will not be readily available until July, which is a long wait. For now, optimism remains intact but the relationship between sentiment and markets seem fragile. In an environment where massive stimulus packages from central banks seems to have taken a return to bearish territory out of play, is ‘neutral’ the new bearish?

Sentiment in the US remains strongly positive but is not unanimous

Sentiment in the US remained in positive territory but the disagreement between our two variants continues for a second straight week. Our two variants of the ROOF Score methodology – one based on style factor returns the other on sector returns – have a rolling correlation of about 0.85 in the US. As the top chart below shows, they tend to agree on the trends but disagree on the timing of the turns. Year-to-date, the style-based ROOF Ratio has been about two weeks ahead of its sector-based counterpart in signaling a change in sentiment.  The bottom chart uses the style-based ROOF Scores for the STOXX USA 900 and shows risk-tolerance (green line) declining and risk-aversion (red line) rising, for the past two weeks. Both variants remain in bullish territory but darkening geopolitical clouds are beginning to weigh on sentiment.

Sentiment in Developed Europe halted its decline to remain just inside bullish territory.

Investor sentiment in Developed Europe had been declining for two weeks, correcting the large disconnect it had with market performance, but stopped short of becoming neutral last week, remaining steady instead, just inside bullish territory. Both ROOF Ratio variants remain in strong alignment with the correlation between the two at 0.91.  With both sentiment and market returns doing their bit to close the disconnect that had grown between them, Developed Europe seems in equilibrium now, awaiting the report card on the success (or failure) of the economic reopening.  Despite the uncertainty surrounding this rather binary question, sentiment remains buoyed by central bank stimulus which seems to take out of play a return to bearish sentiment for the time being. Both risk-tolerance and risk-aversion levels remain at YTD high and YTD low respectively (bottom chart), but off their earlier highs/lows, bringing bullish sentiment down, near the border with neutral. 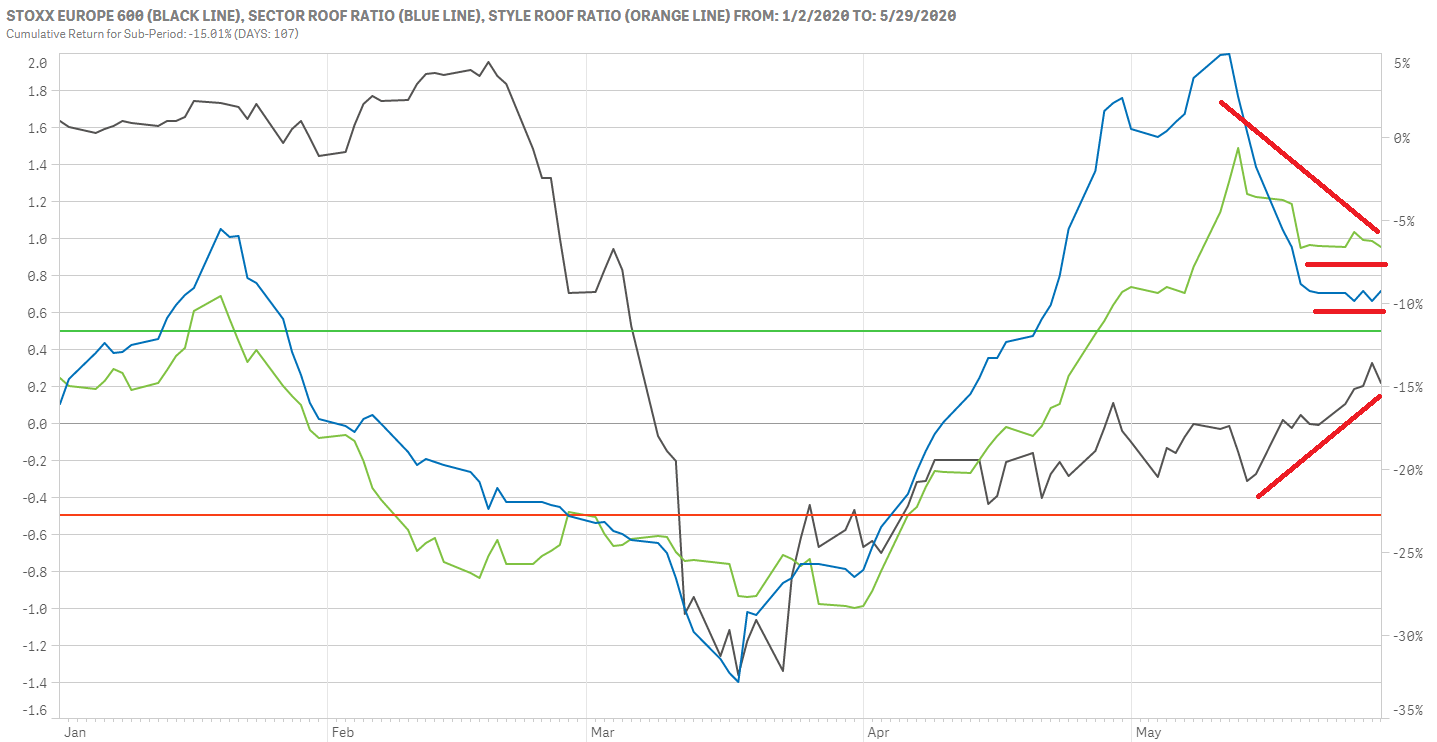 Sentiment in global developed markets flattens-out but continues to climb in Asia ex-Japan.

Sentiment in the STOXX Global 1800 halted its climb of the previous month, pausing at current levels. The style-based variant had overshot its sector-based counterpart and corrected some of this discrepancy last week (top chart). As Asia begins its reopening this month, optimism for a V-shape recovery continues there (bottom chart), but here again, the style-based variant seems more optimistic than its sector-based counterpart which seems more in-line with market returns. Investors will be keeping an eye on both the development in new cases as economies reopen there, as well as geopolitics in the weeks to come. 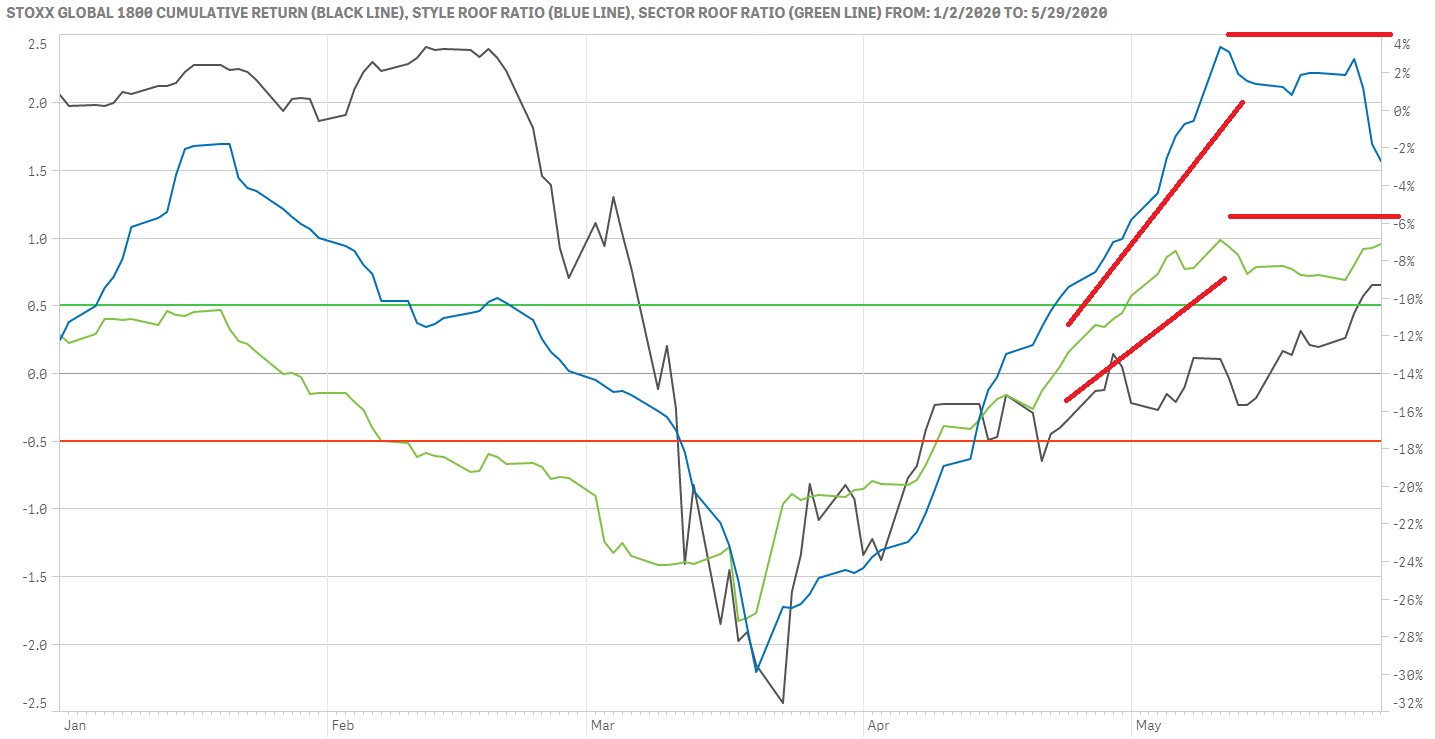 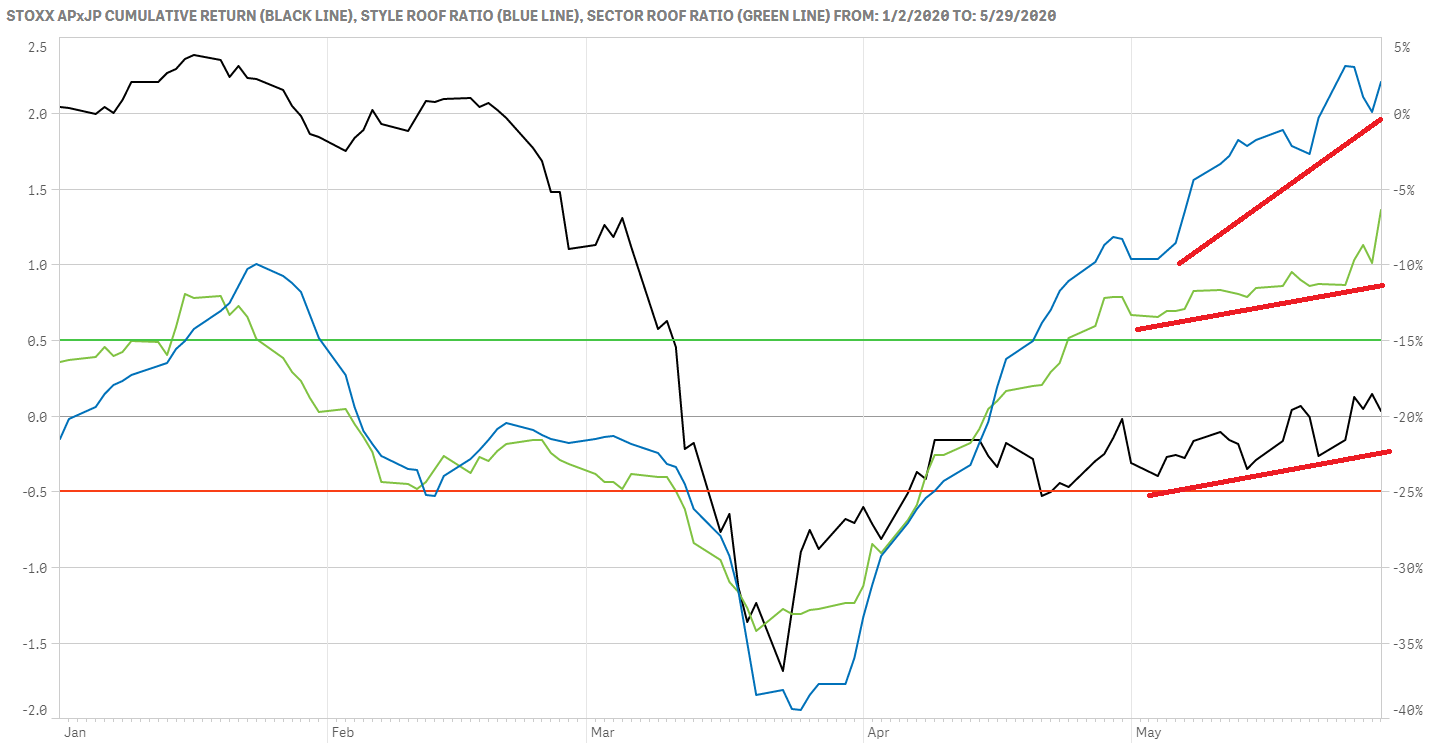