In the news this week: SERIOUSLY ?!!

Summary: The ongoing corona virus pandemic is not (yet) a financial crisis, but it is a crisis of confidence (and leadership). Investor sentiment in all markets ended last week in bearish territory. Simply put, economic and corporate earnings forecasts made just three months ago need to be shaved by a full quarter, probably two, or possibly three, depending on how long the necessary measures put in place to stop the spread of the virus take to be successful.  Given this level of uncertainty and the magnitude of the potential revisions, it has become very hard for investors to pinpoint a fair valuation level they can have any confidence in. If the news continues to confirm investor’s bearish bias, they will continue to over-react to it.  It will take a full cycle of reliable positive news (i.e. declining number of new cases) for them to return to even a neutral confirmation bias. Only then will over-reaction to negative news stop, and a cycle of rational response begin.  Until such time, forecasting markets’ direction is nothing more than mathematical gymnastics.  You might as well try the old Greek method of divination by picking a line from the Iliad at random and see what light the legendary Homer sheds on it.

Sentiment in the US continued to dive into bearish territory last week for both variants of our ROOF Ratio.

Sentiment in the US continued its decline started in early January and ended last week in bearish territory (deeply so for our sector-based variant).  When sentiment is that bearish and confirmation bias so negative, investors tend to over-react to negative news and rationalize away positive ones that do not confirm their fears.  Therefore, when the Fed acted earlier and by more than expected, investors interpreted that as confirmation of their worst fears.  The response was a large over-reaction (yes, in my book a 13% plunge in a single day is over-reacting, a bit). The supply and demand for risk asset had become so imbalanced that sellers were willing to give huge discounts to get rid of their risk assets to the few more risk-tolerant investors still willing to take them. Interestingly in the US the sector-based ROOF Ratio has been less bullish than the style-based ROOF Ratio since late November and turned bearish (below -0.5) since February 12, a full month ahead of the its style-based counterpart (the correlation between the two is 0.82).

This global health crisis has not yet created a financial crisis, but it has caused a crisis of confidence among investors.  Their inability to state with any certainty when the rising tide of new cases will turn and measures put in place to contain it will start to be relaxed, is preventing them from forecasting their economic and corporate impact, thereby leaving blank a key input in their valuation models.  We do have evidence that these measures work from the data we see on China and Singapore.  Investors need to see a similar success in the US before they are ready to let go of their negative bias and stop over-reacting to negative news.  Until then, hold fast and stay healthy. 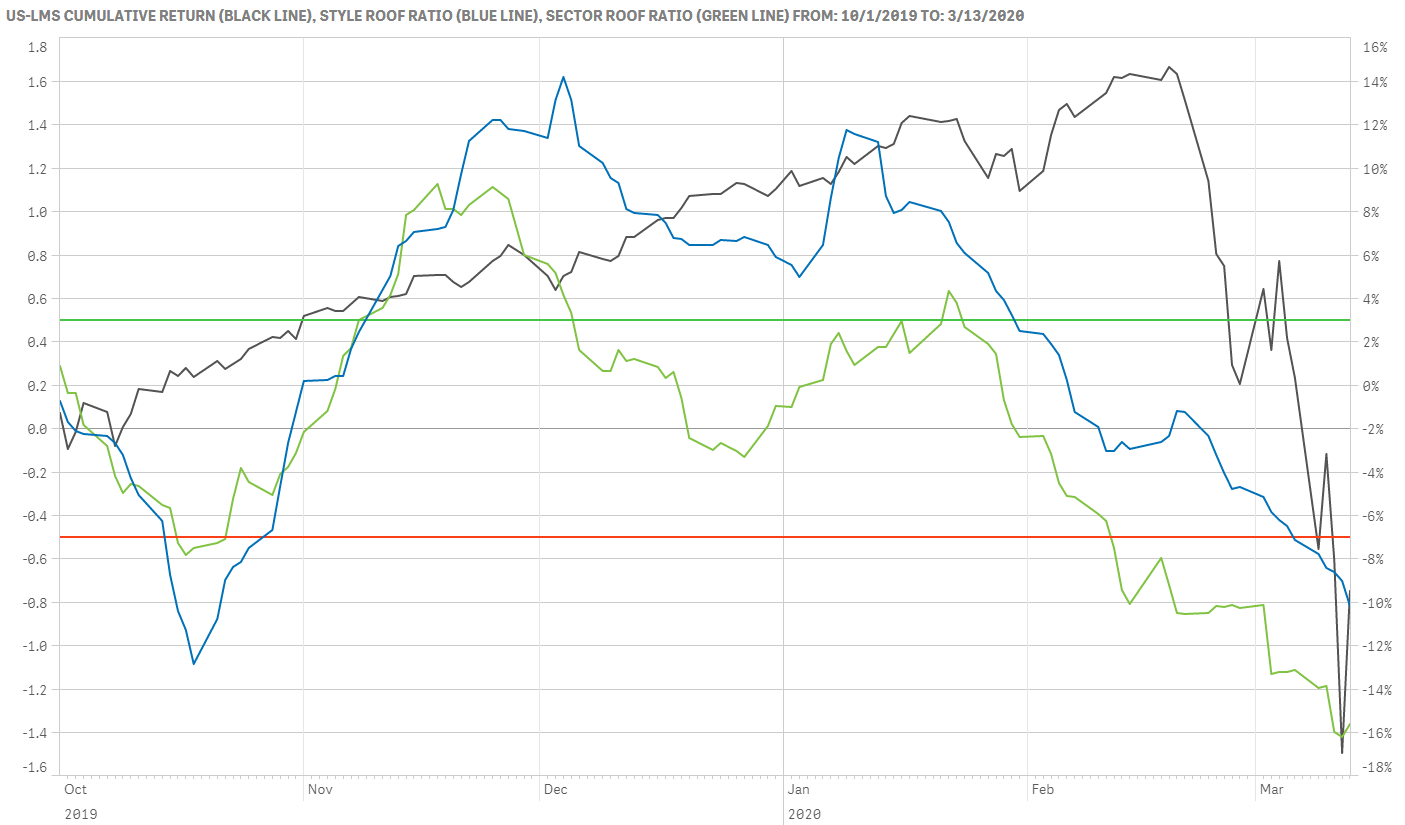 Sentiment in Developed Europe remains in bearish territory where it has been since early February.

The negative news flow epicenter of the ongoing global health crisis has switched from China to western Europe in the last week. Efforts to contain it are now in full swing in that part of the world.  Fear have grown that the anemic economic growth reached after two years of slowing global trade will not be able to survive their impact. Sentiment in developed Europe has not been that low since the collapse of the trade negotiations between the US and China in May 2019. Interestingly, unlike in the US, the sector-based variant of the ROOF Ratio became bearish three weeks after the style-based one.

The traditional impact pattern for a crisis is that sentiment/confidence gets hit first.  Next is financial markets as the then-negative confirmation bias of investors has them respond more to negative forecasts about the impact of the crisis on earnings and the economy than positive ones. Last, if the crisis isn’t avoided, or is mishandled or prolonged, the economy eventually gets hit.  Europe is somewhere between phase one and two as the inability of predicting an end to the root cause (the growing health crisis) is hampering analysts to come up with credible revised forecasts for earnings or the economy.  In this phase, prolongation of the crisis and its combative measures by mismanagement will cause waves after waves of downward revisions which will hit an already strongly negative confirmation bias like a ton of bricks.

The solution to any crisis is good leadership. Nothing else will restore investor confidence to the levels necessary for markets to recover their previous highs.  But even with good leadership, this will take time. The best we can hope for in the short-to-medium term, is a return to calm. 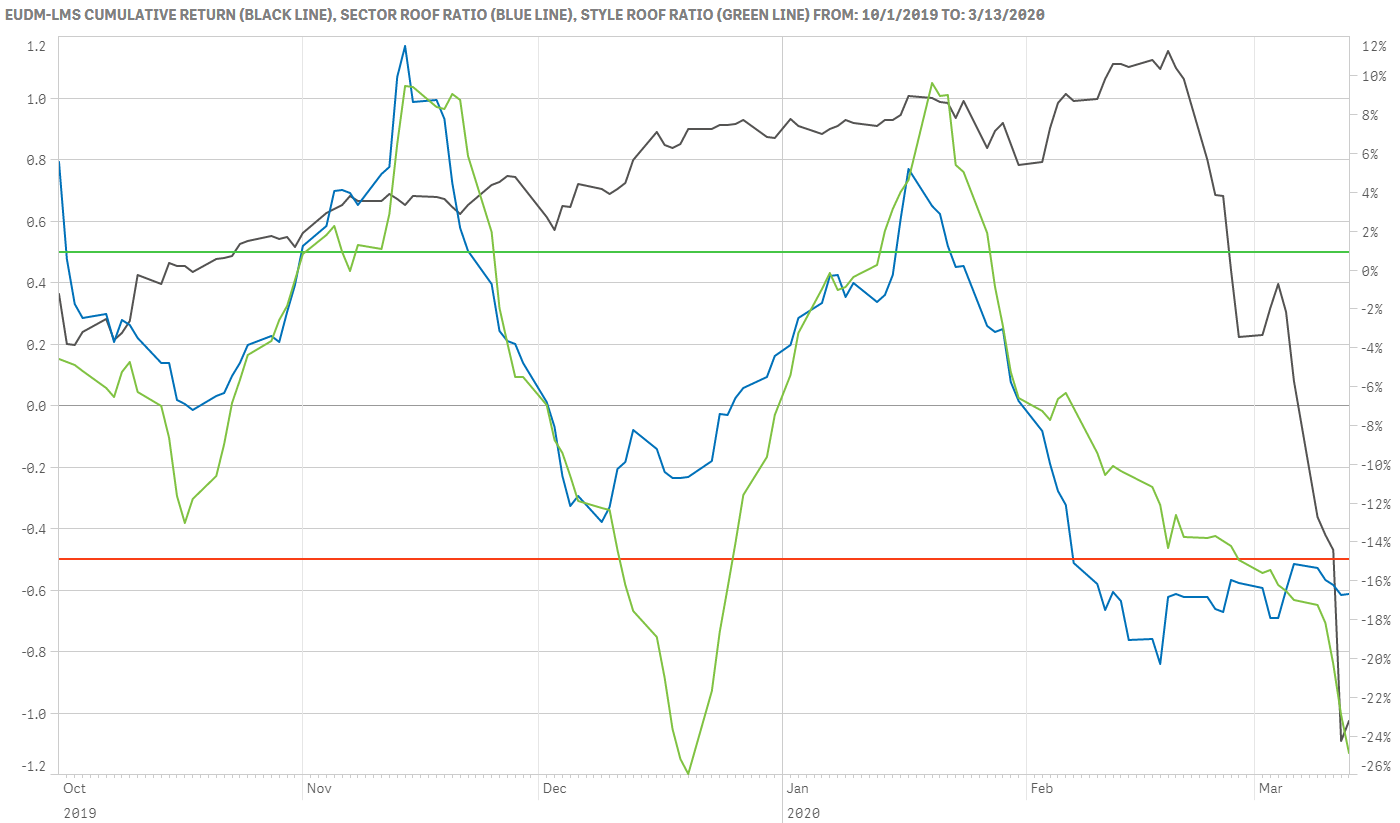 Since early February, sentiment among global developed investors hit a low not seen since the May 2019 trade talks collapse and has remained there ever since. Like in other markets around the world, the key driver of this bearish sentiment has been a fast-rising risk aversion level which is now greater-than a two-standard deviation event in that market. Interestingly, the sector variant of the ROOF Ratio has only turned bearish this past week and is a full month behind its style-based counterpart, making the correlation between the two for the period in the chart below, the lowest of all our pairs at 0.47.  The main drivers of this divergence were the Tech and Industrial sectors as investors were more willing to hold on to positive prospects for these two sectors on the back of the signed mini-trade deal than they were willing to hedge their bets with risk-averse sectors like Utilities and Energy.

Global investors are a special breed in that their sentiment is somewhat dependent on sentiment in other regional markets and is unlikely to change unless say, the US investor’s sentiment makes a run for it too.  This partly explains why it has been this low for so long (style variant).  In a crisis, what tends to happen for these investors is that if the crisis is local then international diversification is welcomed, sought even. But if the crisis is global, investors tend to sell the outside world to protect their performance in the domestic market, which translates into impossible funds flow for global managers to handle. The rising cost of currency hedging makes it even less attractive. For this reason, in the present situation, we would tend to see the Global Developed ROOF Ratio as a lagging indicator rather than a leading one for other markets; the US and Developed Europe in particular. 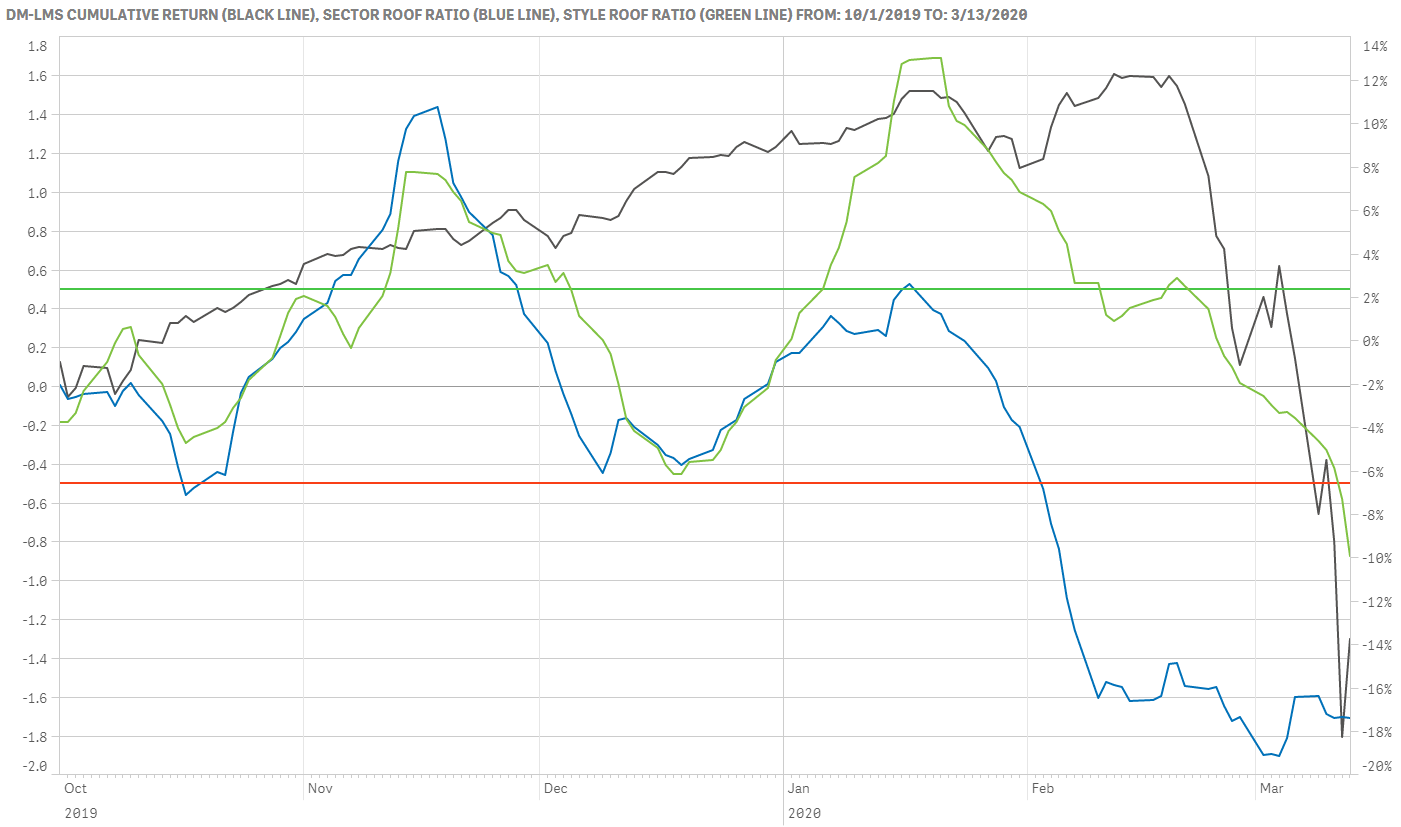