In the news this week: Cometh the hour, where is the man?!

Summary: Investor sentiment continued to deteriorate last week reaching levels of risk aversion not seen since the global financial crisis of 2008, the European debt crisis of 2011, or Q1 2016. This much negative confirmation bias clearly points to investors believing the situation will worsen in the short-term.  At these levels, the ROOF ratios indicate that any positive news – from regulators or central banks – will fall on scared deaf ears.  Meanwhile any negative news – of which there continues to be plenty – will provoke an immediate negative over-reaction, again.  The correlation between the rise in new confirmed cases and the rise in investor’s risk aversion level ranges between 0.87 to 0.95 in the major markets we track. This relationship is unlikely to change until the pandemic curves in the major markets starts to flatten, as they did in China and South Korea. Even then, uncertainty will only come down once credible forecasts on the impact of this pandemic on the economy can be fully evaluated.

Sentiment in the US continued to dive deeper into bearish territory last week for both variants of our ROOF Ratio.

Sentiment in the US, like elsewhere, continued to drop last week with the ROOF ratio ending the week much lower than the previous week at -1.6 and -2.7 for the Style and Sector ROOF Scores respectively. The major driver of this drop in sentiment continues to be rising risk aversion levels which mirror the rise in new confirmed cases being reported by the authorities.

The key drivers of the strong risk aversion levels were the popularity of large-cap stocks with low levels of leverage (debt) and strong profitability.  Interestingly companies with strong projected dividend yields were not given the benefit of the doubt by investors who see any supportive earnings and cash-flow forecasts for these dividend levels as increasingly suspicious. Investors have clearly switched focus from worrying about the profitability of companies to worrying about their solvency, which is not something they have had to worry about for several years now.

As analysis start to release their revised earnings and economic forecasts for 2020, investors will be weighing them against official data as it is being released.  The first batch of economic data to come out will only reflect the impact of the crisis for the month of February and it will take several more weeks before March’s impact (when most of the lock-down measures were taken) is reported on.  During this time and given the negative conformation bias in the market today, we are likely to see bouts of selling into any strengths and markets will find it very hard to stage a lasting rally. 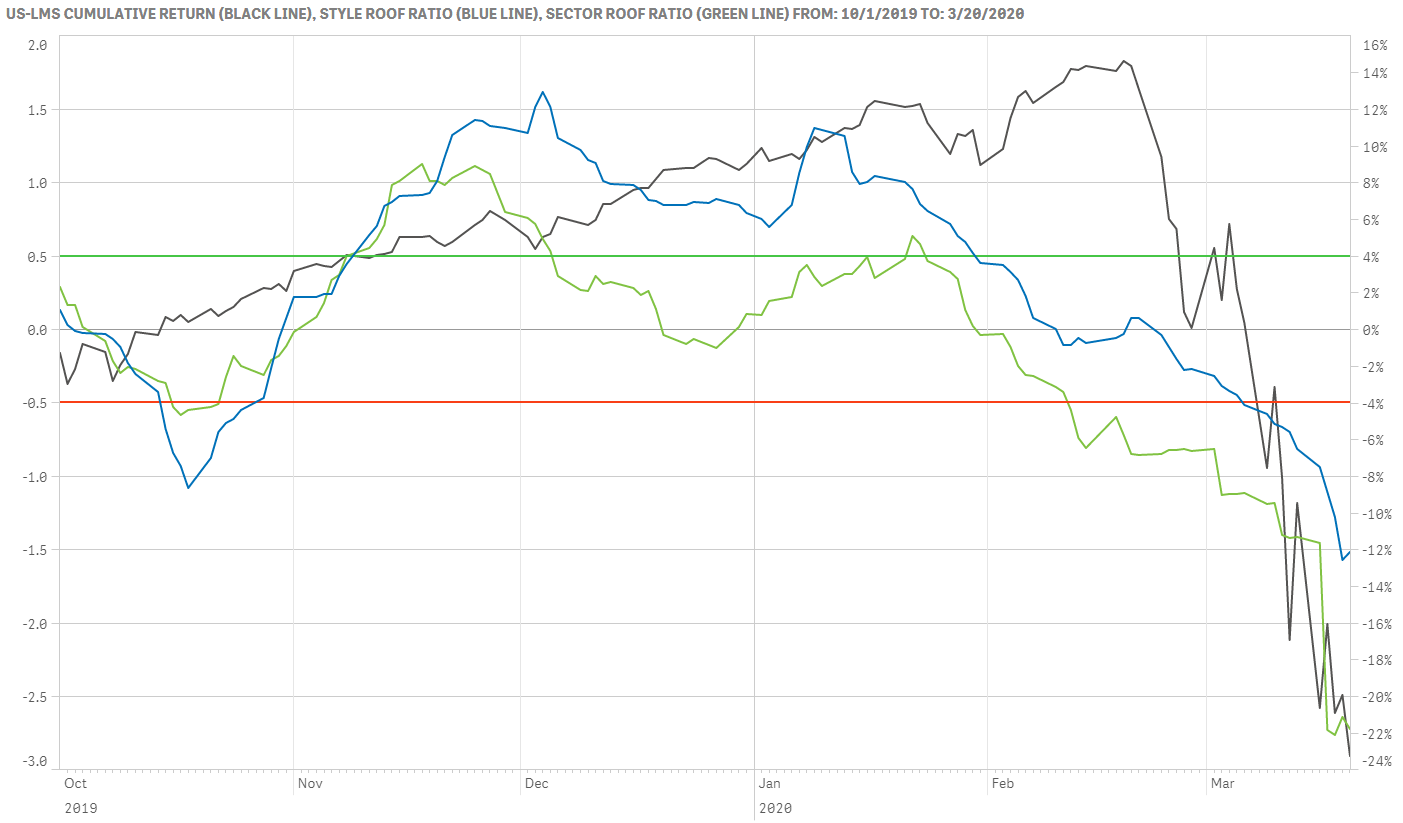 Sentiment in Developed Europe remains bearish but was the only market to show a slight improvement over the previous week.

Sentiment in developed Europe is still negative but a resurgence of risk tolerance driven by bets on high beta and volatility stocks has helped the Style ROOF ratios recover slightly from their previous week’s lows.  No sector showed any trend, with some out-performing one day and under-performing the very next, leading to a seesawing Sector ROOF ratio all week. It seems at this juncture that investors are not sure which sector to reward and which to punish any further.

Style factors showed more of a consistent popularity last week.  On the risk aversion side, large cap value stocks were continuously favored, while high beta and volatile stocks were favored by the risk tolerant investors. This led to a situation where risk aversion ended the week only marginally higher than risk tolerance at 4.69 versus 4.21. This week will test the resolve of risk tolerant investors in that regard and it will take another week of betting on beta and volatility for this newfound risk tolerance to affect the ROOF Ratio.

Risk averse investors have been much more consistent in their style preference than risk tolerant ones making the latter look more like someone trying to catch the rebound than playing the trend. Sentiment remains bearish and Europe is the epicenter of the pandemic right now.  Inconsistencies in the responses across markets will lead to more uncertainty rather than less. 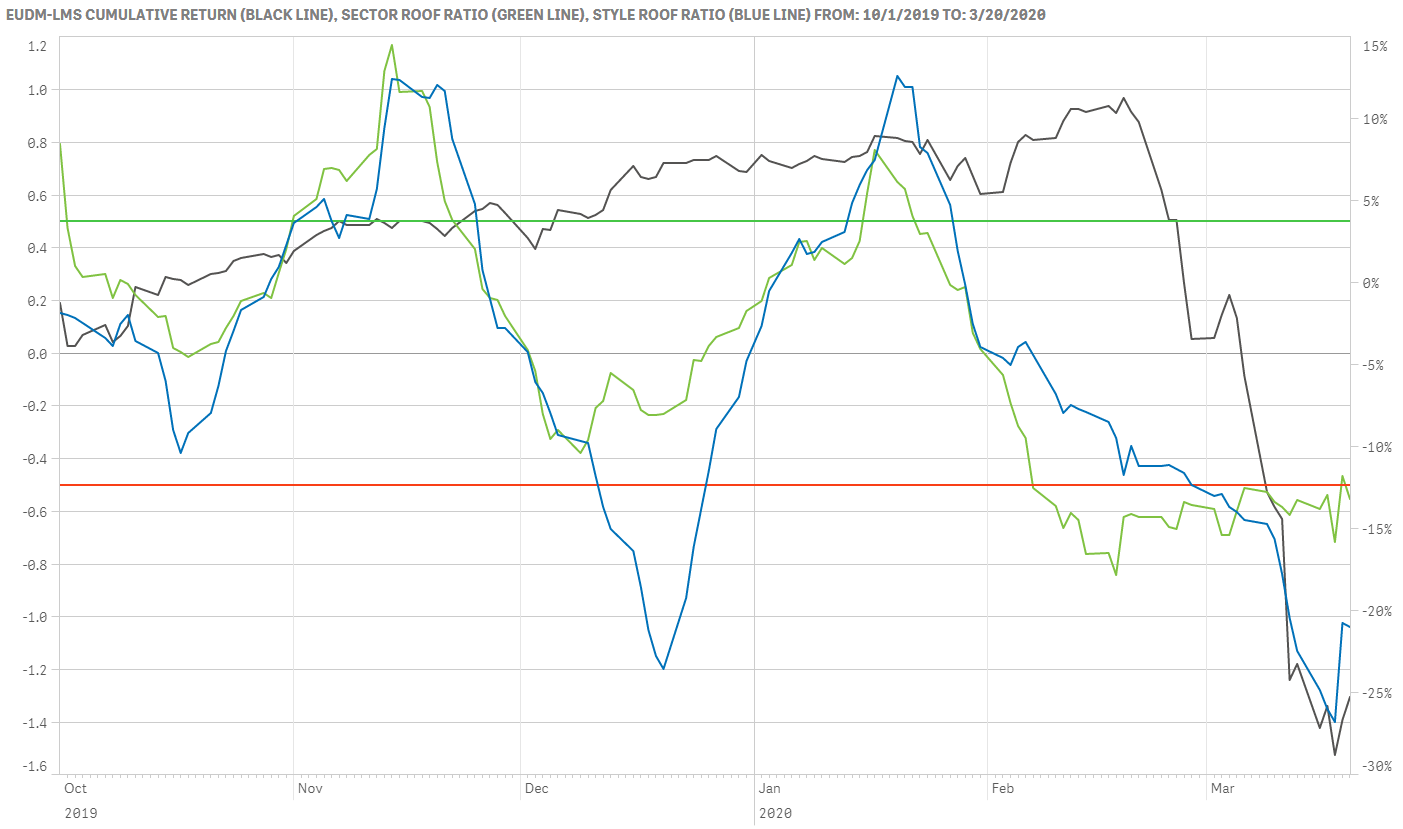 Sentiment among global developed market investors continued to weaken this past week, in line with most other markets

Both ROOF ratios fell deeper into bearish territory this past week reaching levels not seen since 2008.  Style factor metrics favoring risk aversion outnumbered those for risk tolerance 8-to-2 and even 9-1 on some days.  Investors had a strong preference for large companies with little or no leverage, strong profitability, and strong value characteristics.  Here too they shied away from companies promising large dividend payments and a strong growth in earnings, reflecting their skepticism about the future economic growth necessary to support both of those forecasts.

Here too no sector dominated investor’s interest for more than a day at a time with most days evenly split across sector lines and the two risk-based metrics consistently tipping the balance in favor of risk aversion.  This is typical of a market stuck in a high uncertainty phase and we would not expect any clarity to appear until some of the pandemic curves start to flatten and investors can start to predict when the pain on the economy is likely to stop.  Until then, we would expect sentiment to remain unsupportive of any rally that started. 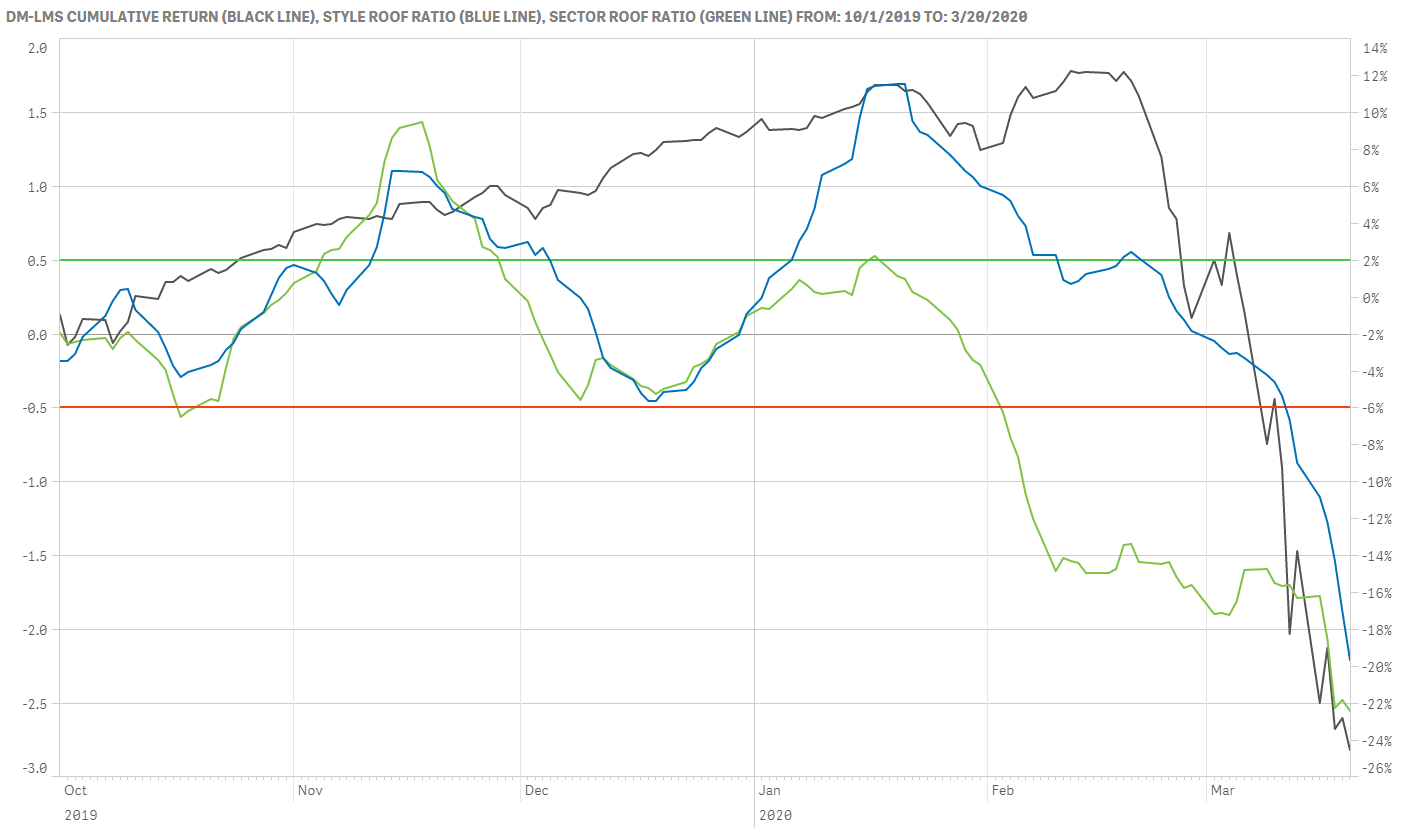