Summary: The help helped. Central banks around the world dusted off their printing machines in a historical effort to try and keep businesses afloat until the temporary lockdown on the economy is lifted. This helped sentiment improve in all markets we track except Australia, China, and Emerging Markets. Overall investors remain bearish (ROOF Ratio <-0.5) in anticipation of strongly negative economic data over the next few weeks and the inevitable prolongation of the current shutdown measures in key markets. Pandemic curves have not yet started to flatten out except for China and South Korea, but Risk Aversion curves have pulled back from their last week highs as investors assess the size of the stimulus packages versus what will be required to prevent the global economy from falling into depression. Now that we have seen investor’s behavioral response to the global health crisis, the next few weeks should start to give us a glimpse of what their fundamental response to economic data will be. Brace for impact.

As in most other markets, sentiment in the US improved on the back of massive monetary and fiscal stimulus packages as well as comments from officials indicating that more would come if needed. This has helped the Risk Aversion scores decline from their highs in both methodologies, but Risk Tolerance only rebounded from its lows in the Style-based scores.  This rebound was driven by a speculative switch out of profitable companies and into non-profitable ones as well as a return to betting on growth stocks. A negative return for the dividend yield factor also helped, driven by cash-flow concerns and the likelihood of companies to cut-back on their dividend promises to investors in order to preserve cash.

The chart below shows the Style-based ROOF Ratio in blue, and the new Sector-based ROOF Ratio in green against the STOXX USA 900 in black. We note the divergence in sentiment between the two methodologies this past week. One methodology sees the glass as being half full, the other as being half empty. Neither, it seems, think the glass may just be two times too big (i.e. not enough data to fill the glass).

The last time we saw the Style and Sector ROOF Ratios diverge was in August of 2019 when uncertainty around the US-China trade war was rising and new deadlines looming, making any forecast a binary outcome with low probability either way.  Given the current level of uncertainty in the market, it would seem that investors are again not sure how to position themselves vis-à-vis the new stimulus packages, and identifying clear winners and losers without the benefit of economic or earnings data, remains elusive at this point. Despite this slight disagreement, both ratios remain in bearish territory which points to a higher likelihood of a negative over-reaction to negative news, rather than a positive reaction to not-so-negative ones in the coming week. 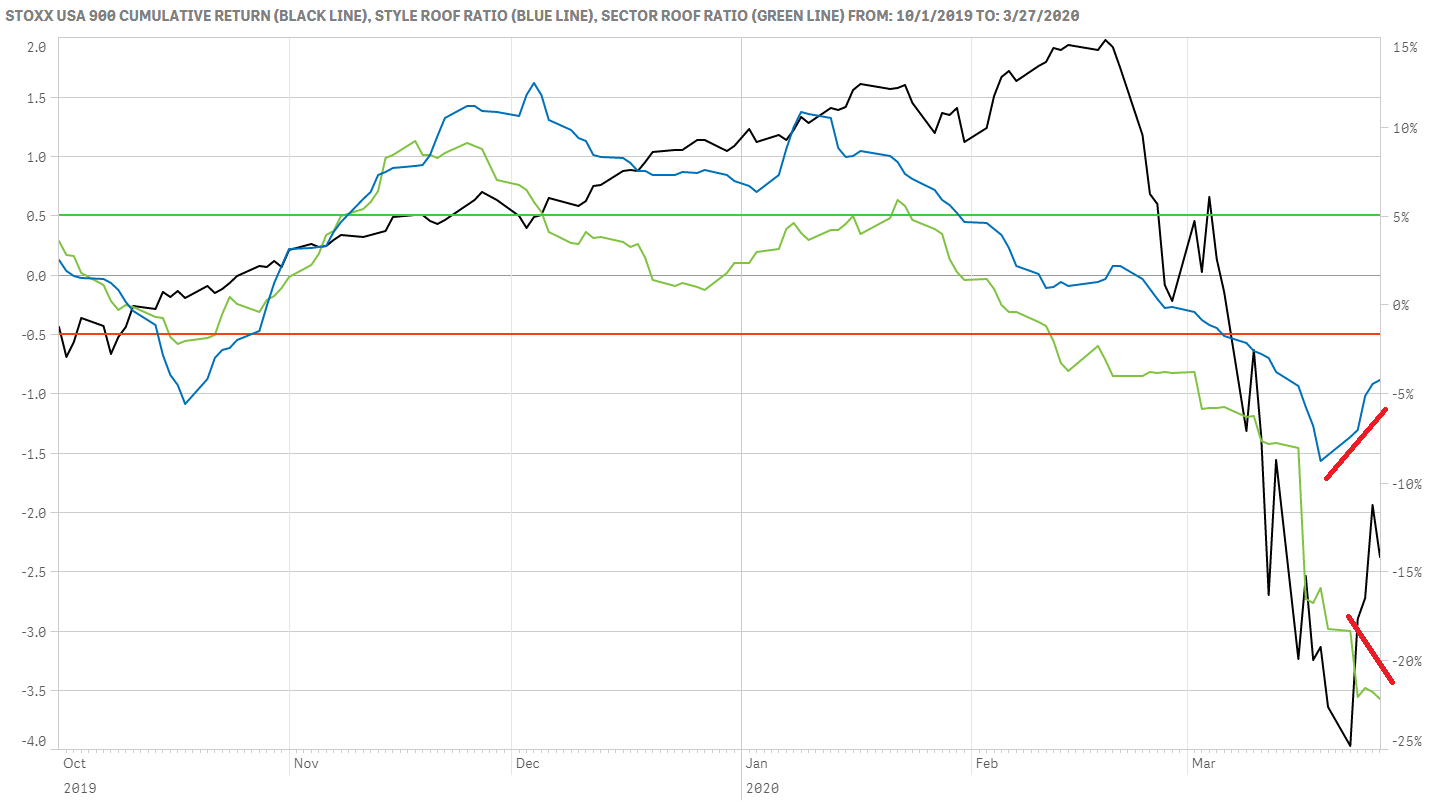 Sentiment in Developed Europe improved markedly in the last week for both ROOF Ratio methodologies with the Sector-based ROOF Ratio returning to the lower edge of the Neutral zone.

Sentiment in Europe continued to improve even in the face of record numbers of new Covid-19 cases and even deaths.  The Style-based ROOF scores remain in bearish territory but were helped by both a continued slight decline in risk aversion and a slight rise in risk tolerance. Large-cap, low-beta, value stocks with limited or no debt remain in favor – an indication that risk aversion remains high. The only two styles favoring risk tolerance were a bet on volatility and against dividend yield, which given the drain on cash flows the current crisis is expected to deliver, doesn’t really mean that investors are bullish but rather that they do not have much faith in the dividend payouts promised to them just a few months ago.

The sector-based ROOF ratio has bottomed-out in mid-February and continues to show week-on-week improvements. At -0.4 it is now out of bearish territory and into the lower half of the neutral zone.  This newfound optimism may not last however, as the daily ROOF scores ended last week with seven sectors in favor of risk aversion and only three in favor of risk tolerance.

Market volatility remains elevated, keeping most risk-constrained mandates out of the market.  The US has just extended its lockdown measures until the end of April, but Europe is looking at June at the earliest for relief.  Until then, economic data is likely to only point in one direction.   The recent rebound in sentiment has been supportive of the market’s recovery but more positive facts are needed for it to recover further.  In the face of still rising new Covid-19 cases and deaths, sentiment is likely to head back south and take the market with it as bearish investors over-react to the onslaught of negative economic news about to hit the newsstands. 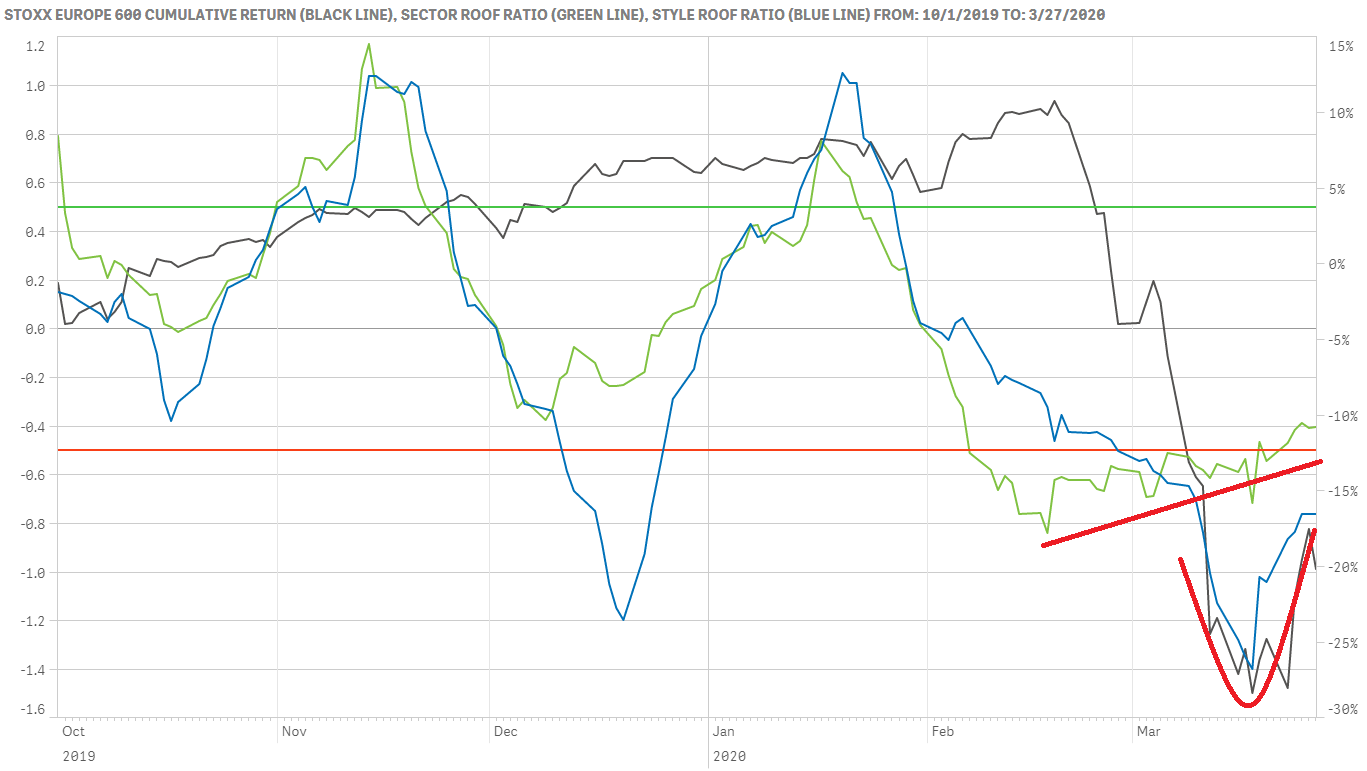 Both methodologies showed an improvement in investor sentiment last week, but both remain deep in bearish territory.  For the Style-based methodology, the risk tolerance scores benefited from the same flight out of high dividend paying stocks as in other markets as the credibility of previous payouts is put into question by the ongoing cash-crunch caused by the lockdown.  In anticipation of a stimulus-led rebound, we saw the same bets on volatility return to support the risk tolerance scores but investors continue to prefer large-cap, low-beta, profitable companies with low or no debt burden; a clear sign that they remain fundamentally risk averse in these economic conditions.

The Sector-based ROOF ratio also improved, but with risk aversion declining more than risk tolerance rose. No sector managed to outperform the index for any two consecutive day period this week, highlighting investor’s uncertainty as to what the future has in store for the economy and corporate earnings.

Despite the recent rebound, sentiment remains deep in bearish territory and the pandemic curves of most developed markets are still on their ascendency.  Lockdowns are being extended and health services stretched.  Next in the news are the first economic data points with a hint of what is to come and given investor’s strong negative bias, the probability of more over-reactions to negative news (i.e. data being worst than feared), is higher than the probability that they will reward less-than forecasted negative news in the short-term. 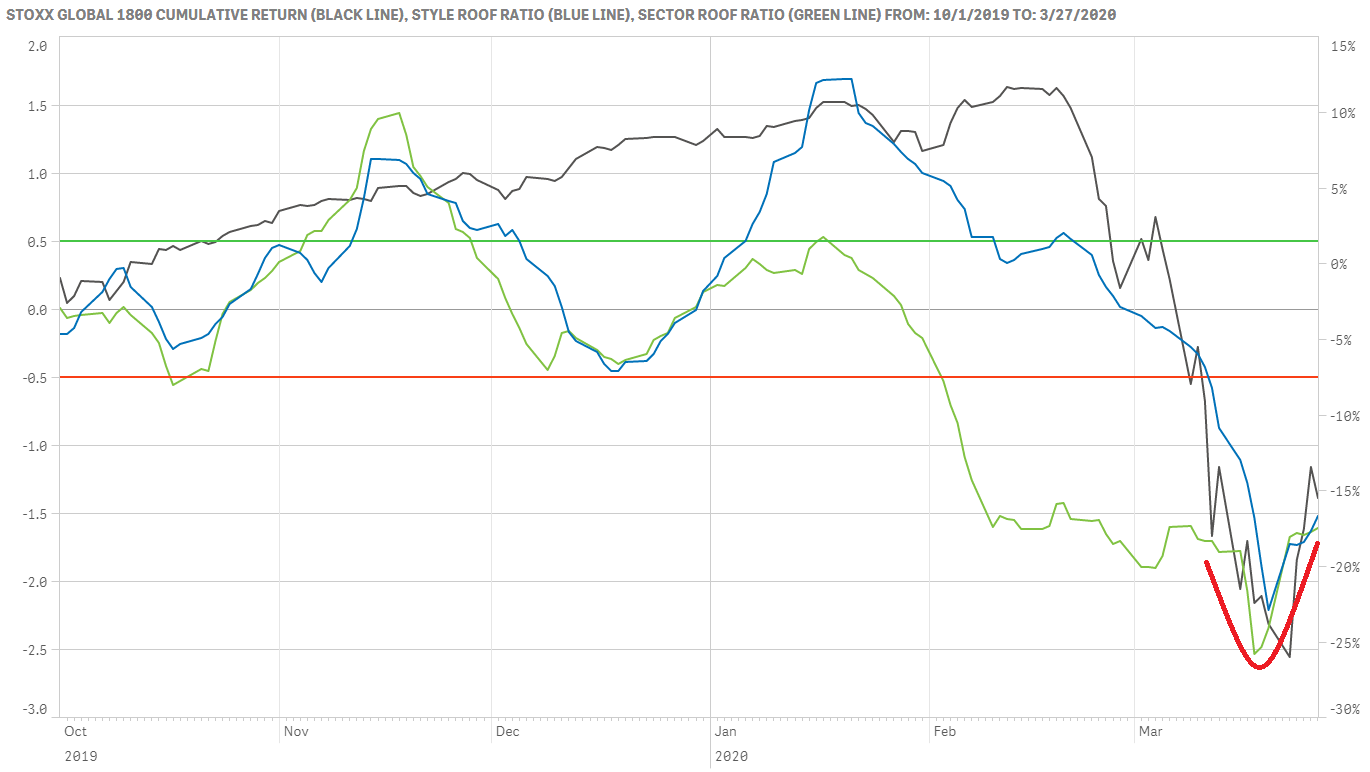