Potential triggers this week: Second estimate of US Q1 GDP, alongside durable goods orders, personal income, and outlays, and PCE price index. Eurozone business survey and inflation rate, Germany retail sales, China industrial profits, and Japan consumer confidence, industrial production, and retail trade. In the background is another brewing geopolitical crisis between the US and China, this time on the origins of the coronavirus as well as political freedoms in Hong Kong. It remains to be seen whether the trade agreement singed earlier this year between the two will survive. One thing is sure, no one is talking about a Phase Two deal anymore.

Summary: Sentiment remained bullish last week in all markets we track except China (which never quite got there) but momentum has declined across the board with some, US and Europe in particular, seeing lower sentiment than the previous week. Since mid-April, investor sentiment has been far ahead of market returns. The lack of positive news to trigger this confirmation bias into strong buying behavior translated into a flat market. A month-long divergence between markets and sentiment is beginning to weigh on the latter with risk tolerance declining as risk aversion begins to rise again in a warning to investors that while the odds may still look good, the goods may soon look odd.

Sentiment in the US remained in positive territory last week albeit declining from its high of earlier in the month (top chart).  Risk tolerance (green line in bottom chart) has been declining from its YTD highs reached at the end of the previous week and while risk aversion has not yet increased, it has bottomed-out.  Since mid-April, investor sentiment pointed to a V-shape recovery for the economy while markets and data released seemed to indicate a U-shape recovery at best for now. The success of the reopening will take time to assess as economic data reflecting its impact will not be known until late June. Meanwhile, central banks are applying more and more stimulus, but will that be enough to counter any negative impact from rising geopolitical risks between the US and China. 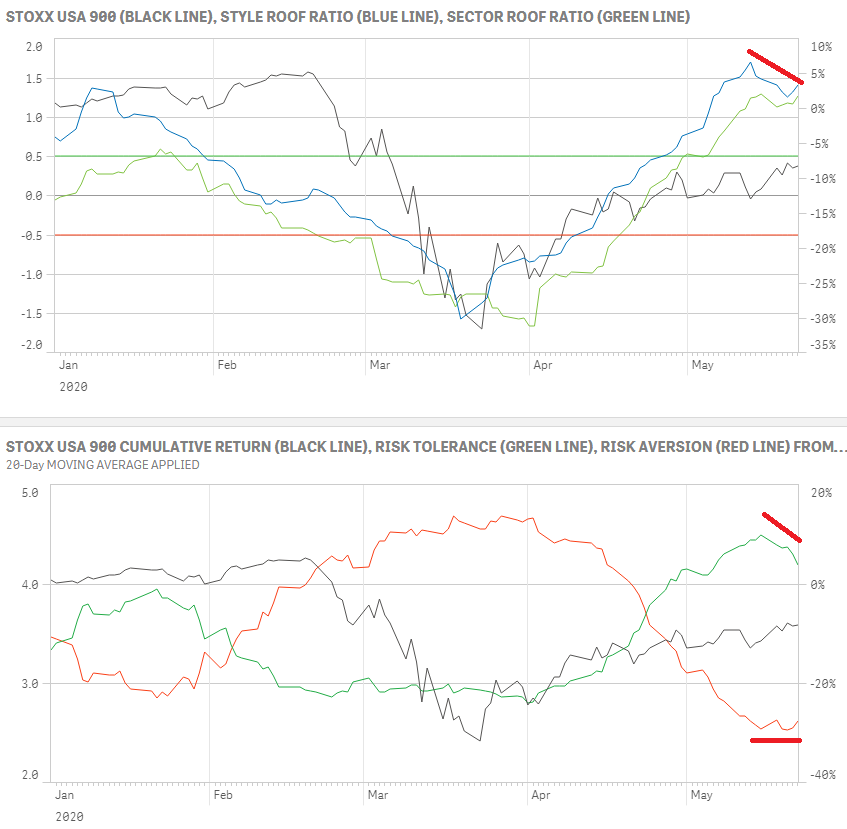 Sentiment in Developed Europe continues to decline but remains in positive territory, just.

Investor sentiment in Developed Europe continued its correction path last week and ended just inside the positive territory (top chart).  As in other markets, risk tolerance has started to decline but European investors are also getting more risk averse (bottom chart). The divergence between investor sentiment and market returns in Europe was the biggest of all markets we track.  There too, the reopening of major economies in early May, together with the falling rate of new covid-19 cases, led to surging sentiment and the expectation of a V-shape recovery.  The lagging pace of economic data to confirm this scenario has prevented this positive sentiment bias from turning into strong buying action.  V-shape or U-shape, that seems to be the sentimental question now for investors. 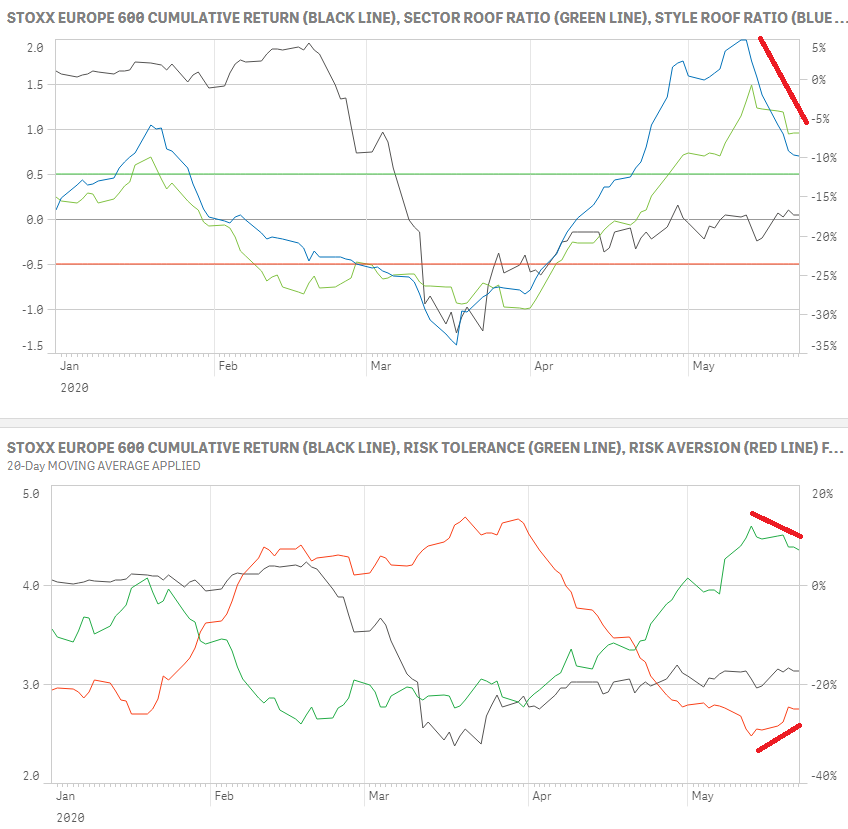 Sentiment in global developed markets is also taking a breather this week as in other developed markets but remains in positive territory.  We note that our sector-based variant of the ROOF Ratios was never as bullish as the style-based variant in that market and are now at the low-end of the positive territory (top chart). Sentiment in Asia ex-Japan bucked the trend of other markets, increasing its divergence with market returns, but this may all change with the recent developments in Hong Kong (bottom chart). 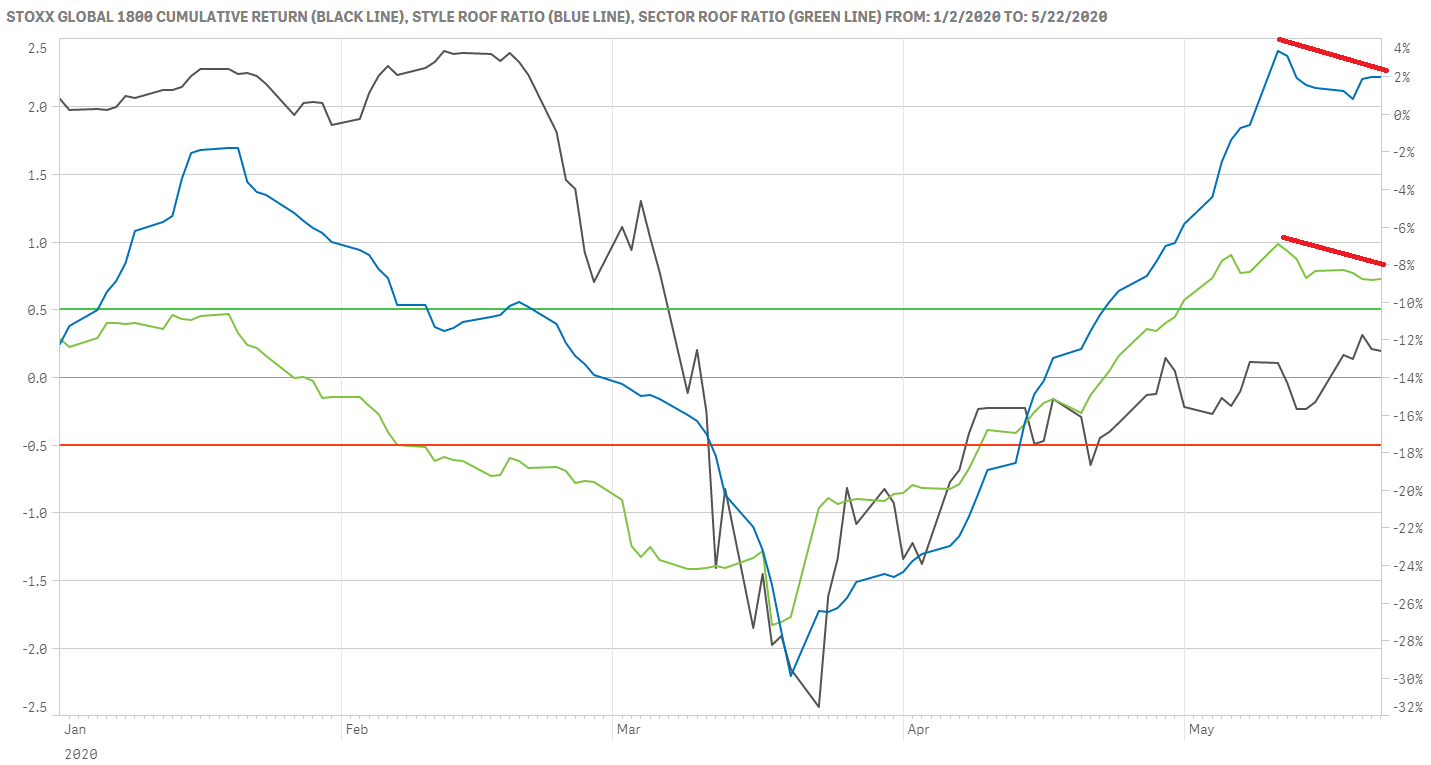 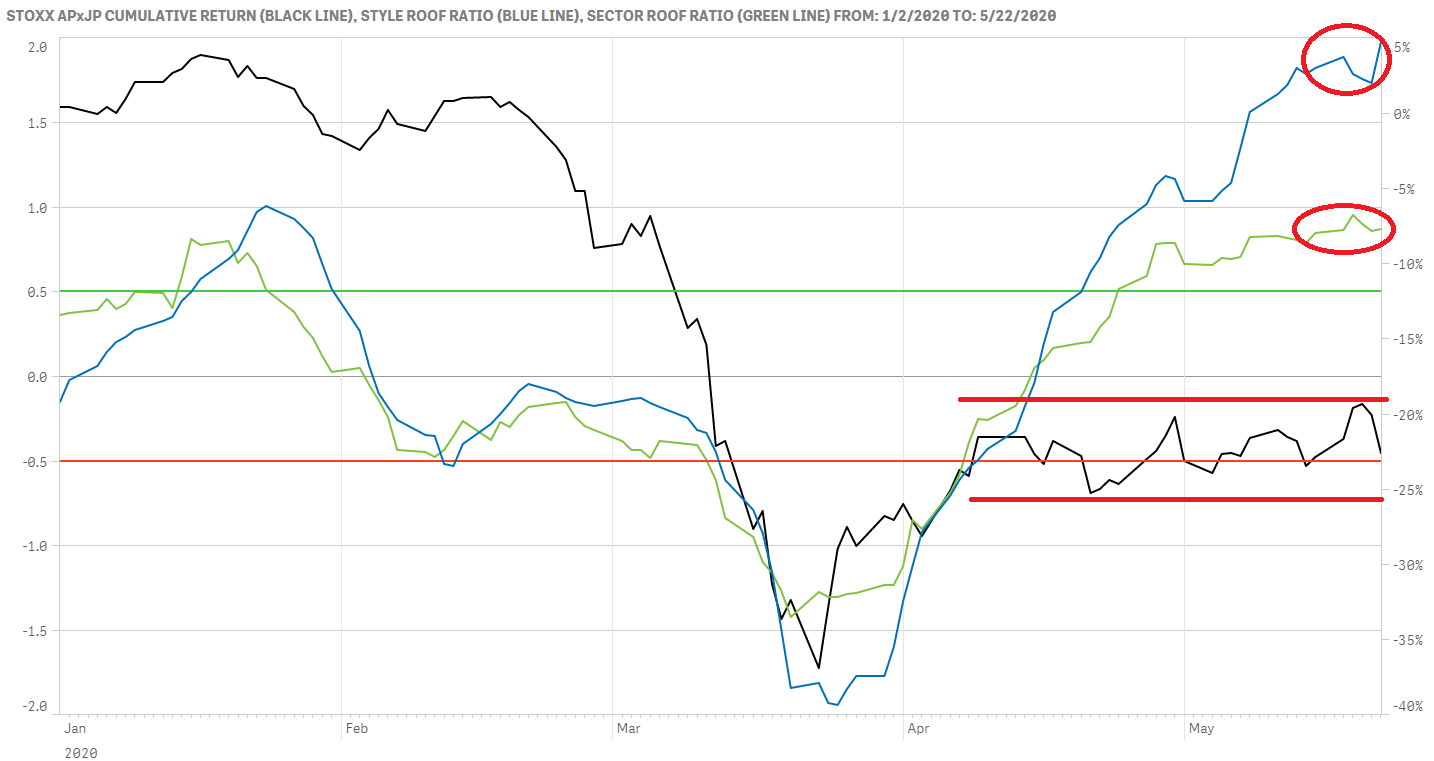