Potential triggers this week: US existing and new home sales numbers for August, and the weekly jobless report. PMI surveys for the US, UK, Eurozone, Japan, and Australia. Interest rate decision by the BoC, and UK and Eurozone consumer confidence. US political theatrics just got more agitated with the race to fill the open supreme court seat, and still no second stimulus package in sight.

Summary: Globally sentiment is divided based on specific regional circumstances. The US has a presidential election less than seven weeks away and partisan politics is withholding a crucial fiscal stimulus package. Europe is seeing a resurgence of infections and investors are caught in the headlights of talks of renewed lockdown measures and hopes for bigger stimulus response. Meanwhile investors in Asia are focused on news of low US interest rates until 2023 as well as a weakening USD giving them access to cheaper credit to weather the storm. Whatever the reasons for the delayed stimulus responses in the US or Europe, time is running out soon for both and investor’s patience is beginning to weaken. They have been holding on to hopes for a long time now and in a couple of weeks will find out from CEOs how much this patience is costing them in terms of missed earnings. Risk-tolerance is weakening, risk-aversion rising, and winter is coming.

US Sentiment flattens out in the Neutral zone, awaiting direction.

Both variants of our ROOF Ratio halted their descent in the middle of the Neutral zone last week (top chart). This is the first time since late April that sentiment has been neutral after spending 89 consecutive days in bullish territory. The STOXX USA 900 index has likewise halted its rise as investors locked-in profits from the Q2-Q3 rebound ahead of a politically-charged and unpredictable Q4.

Risk-tolerance has been declining and risk-aversion rising for a month now (bottom chart). The two are almost at equilibrium, as they were in early February of this year. In this state, there is no cognitive bias, positive or negative, dominating sentiment and market-moving news will be interpreted based on fundamentals. The US Presidential election less than 7 weeks away now and is expected to yield a delayed decision at best (a legally challenged one at worst). There is still no second stimulus package to replace the one that expired on July 31st and a new partisan battleground has opened with the Supreme Court vacancy. Political noise will increase in decibels while investors await the Q3 earning season to find out how much the lack of an additional fiscal stimulus since July 31st is hurting businesses, especially big tech. 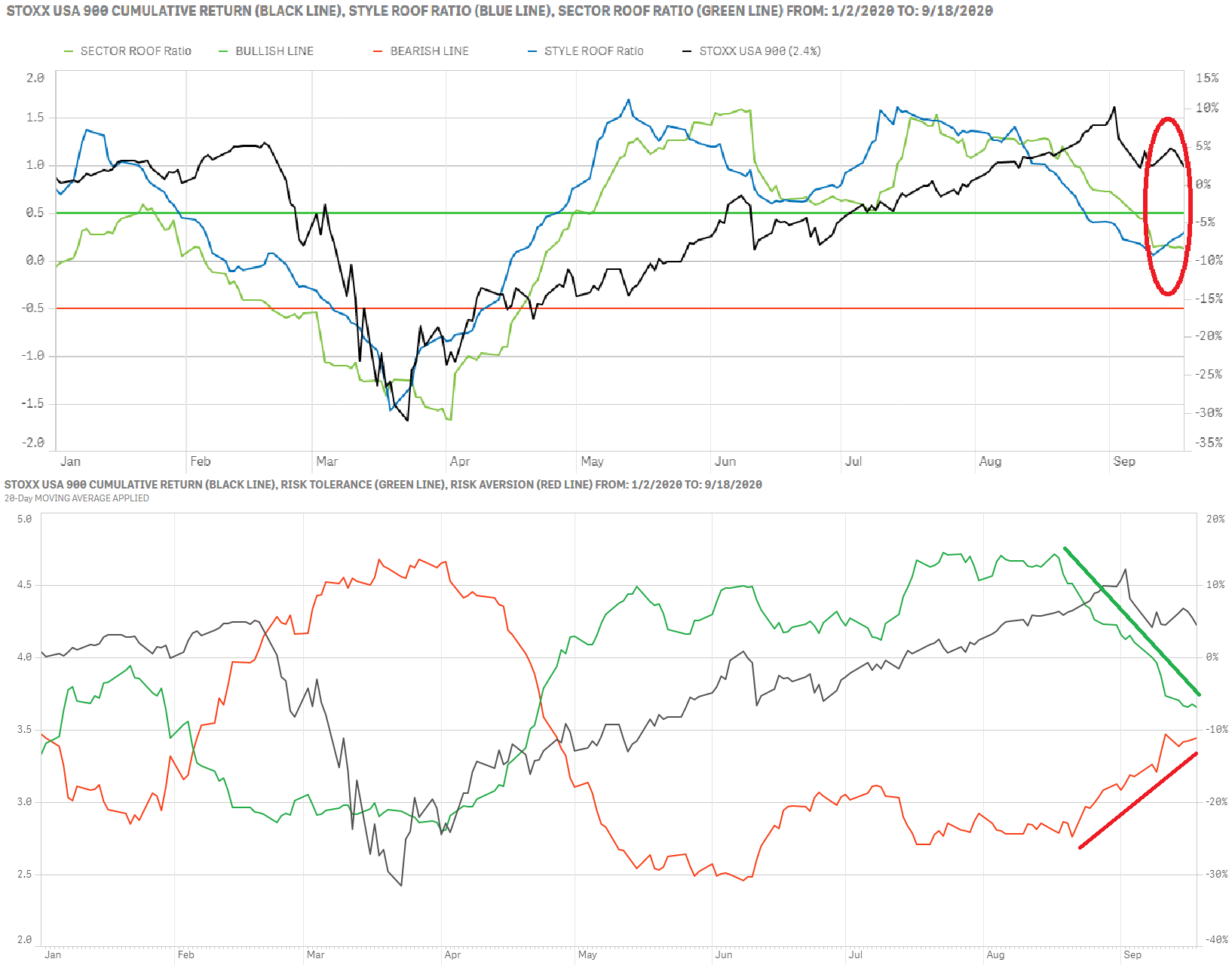 Sentiment in Developed Europe remained flat last week as investors there resist the temptation to sell on news of a wave of new infections, in the hope that this will increase pressure for a bigger fiscal and monetary stimulus response (top chart). Markets have never fully recovered from their March Covid-crash and may not seem overbought, but sentiment has been playing a game of chicken with the virus for over 110 consecutive days now hoping that as the economic impact from the health crisis worsens, a more vigorous stimulus response will come.

Risk-tolerance and risk-aversion have been flatlined since May (bottom chart), and while the gap between them remains positive (bullish), sentiment momentum has been declining since reaching a high on May 21st indicating that investor’s resolve is weakening. The resurgence of new infections, especially in the UK, Spain, and France, is leading to talks of renewed lockdown measures instead of further reopening and although investors have held-onto their positive cognitive bias thus far, official lockdown talks, given the weakness of the current recovery, could make them abandon their bullish hopes and head for the sidelines. 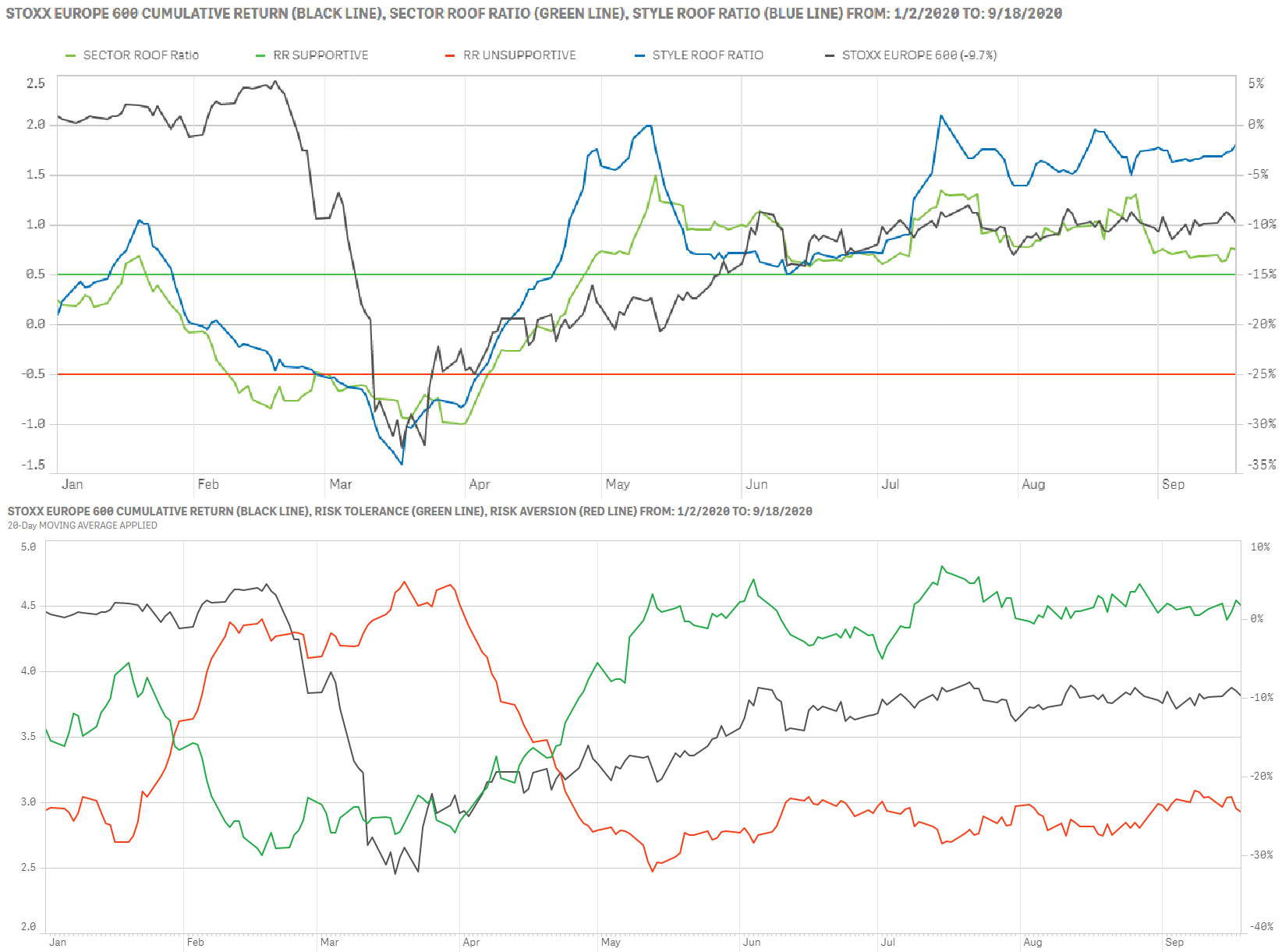 Global investors have one foot in the neutral zone but welcome cheap credit in Asia ex-Japan.

The Sector variant of our global market ROOF Ratio remains firmly anchored in the neutral zone but its Style counterpart experienced a rebound as investors there resumed betting on growth, high- beta, volatile small-cap stocks (all risk-tolerant characteristics based on our ROOF methodology). The sector variant is now lower than it was pre-Covid-19 in January indicating that investors have returned to a cautious stance as we head into Q4 (top chart).

Investors in Asia celebrated the Fed’s announcement of low US interest rates until at least 2023 with a resurgence of risk-tolerance for both our ROOF Ratio variants. The Sector ROOF now returned to the bullish zone after a brief walk in neutral territory (bottom chart). The Covid narrative is more positive in the major markets of this region and investors here are hoping that Asia ex-Japan will benefit from international stimulus efforts to get the global economy going again. This is the third time since April that investors have had a burst of risk-tolerance on the back of overseas stimulus hopes, and each has helped markets climb higher, yet the STOXX Asia ex-Japan index remain down close to 8% YTD. Will third time prove the charm for the region this time around?