Potential triggers this week: US inflation rate and job openings, and ECB monetary policy meeting. In the UK, a new round of Brexit talks will resume after negotiations in August ended without any progress on key issues. Other important data to follow include China trade balance and inflation rate, and UK monthly GDP figures.

Summary: Sentiment declined sharply in all markets we track during the last two days of last week, with only Australia and Japan managing to hold on to a weekly gain. The UK saw the biggest drop in sentiment but remained in the bullish zone as investors’ risk appetite in that market continues to be erratic given the ongoing negotiations with the EU over a post-Brexit commercial relationship. Last week saw sentiment in the US decline further after falling into the neutral zone the previous week for the first time in 90 days, despite a positive jobs report on Friday and further assurances from the Fed that interest rates will remain low for “years”. The demand for risk is supported by QE-driven liquidity, improving economic fundamentals, and ongoing pause in the US-China trade war. The supply of risk assets is driven by the highest valuations in decades, rising geopolitical uncertainty, and the need to secure recent performance ahead of a traditionally more volatile Q4.

Sentiment continued to weaken from its previously bullish stance for both ROOF variants.

Both variants (Style and Sector) of our US ROOF Ratio continued to decline last week. For the second time since June, the decline in sentiment over the previous 20 days has been large enough to trigger a sell signal for seven consecutive days now. The June drop in sentiment was triggered by the second wave of infections following the reopening of the economy in May. Once fears of a second lockdown were removed in July, sentiment rose again triggering a buy signal. This time, delays in the second stimulus package as well as rising volatility is weighing on sentiment.

As we head into the business end of a Presidential race still too close to call, the base case scenario of a Biden Presidency and a Republican Senate that investors have been betting on all summer, is no longer as certain as they would like it to be. The combination of rising volatility and uncertainty will push correlation higher eroding what little diversification was built into portfolios over the last few months. Given the high sector concentration centered around the FAANG stocks, performance could unravel quickly if the demand and supply for risk assets turns in favor of supply as investors turn bearish.

Currently the ROOF Ratio for both our variants is neutral to slightly positive, but, given the current amount of liquidity in the market, Neutral is the new Bearish. Give volatility an upward nudge, and the return expectations necessary for a rational investor to allocate to equities instead of treasuries must rise by almost twice as much. Historically, Q4 has been a more volatile quarter than the rest of the year. Add to that a bit of extra uncertainty pertaining to the Presidential election, and the confidence needed at current valuation levels may start to look more like hubris than reason. Perhaps this realization is responsible for the declining risk appetite these past ten days, 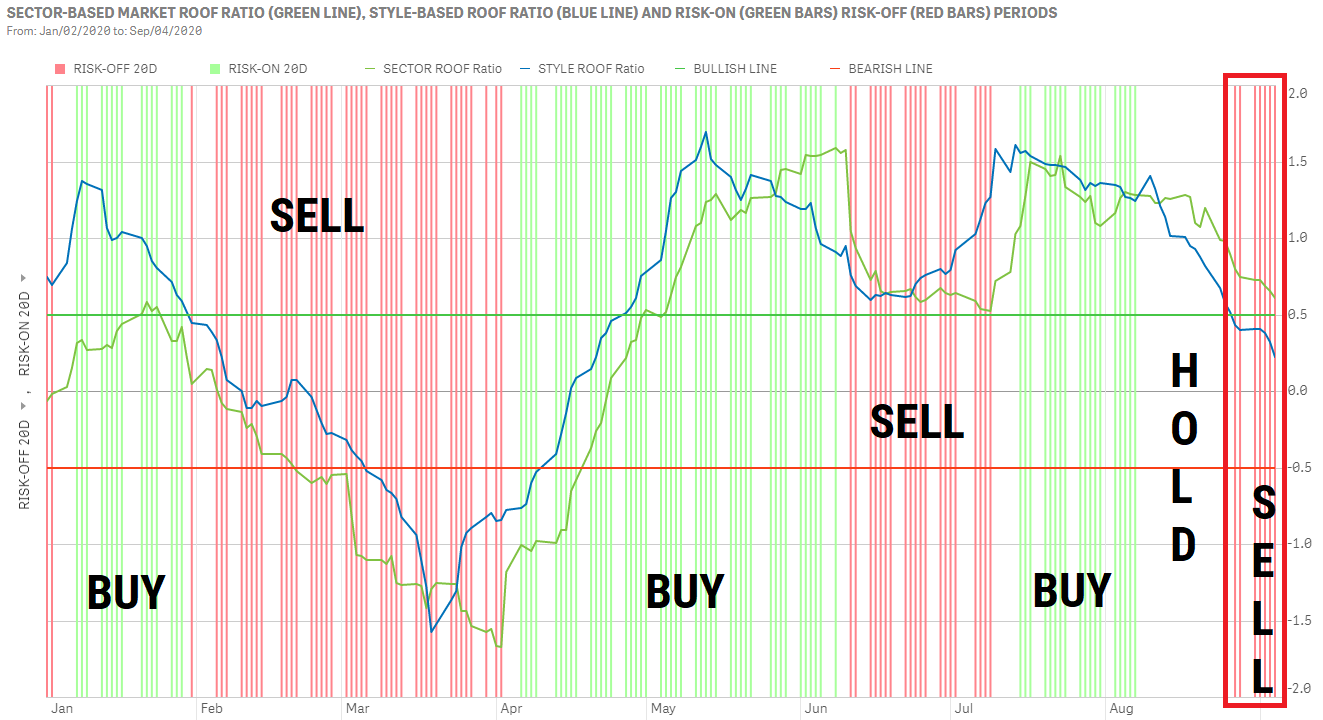 Sentiment in Developed Europe weakened last week after failing to reach new highs on its third attempt (top chart). The STOXX Europe 600 index has been trading sideways since early June as each failed attempt at new sentiment highs induces profit-taking on the index.

Likewise, sentiment momentum has also failed to regain the same level of strength and conviction it had during the April and May rebound (bottom chart). The ECB meets again this week and investors are hoping for more stimulus measures. The cognitive bias remains positive at these levels meaning that investors are looking for a reason to buy but having been positive for over 90 consecutive days now, their resolve may be weakening. Disappointment on the stimulus front, combined with continued negative news on the second wave of infections could weigh on sentiment and pull it into the neutral zone, thereby triggering a sell signal for both our ROOF Ratios during the course of this week.

Divergence between sentiment and markets finally weighs on the latter in both regions.

Sentiment and market returns had been diverging away from each other in both Global Developed and Asia ex-Japan markets for two weeks. Last week, the latter finally gave in to the weakening sentiment and started a correction.  Sentiment in both markets remains in the slightly positive region, at the border between Neutral and Bullish, but rising volatility will add pressure for investors to either raise their return forecasts or de-risk their portfolios.

For three weeks now, the balance between the demand and supply for risk has been inching in favor of the supply side, and while this imbalance isn’t yet negative, momentum there and in other key markets seems to suggests that the risk-averse investors are getting more numerous each day. The bias is still slightly positive, but at this point, it will take some better-than expected news to lift it back up to a level where the number of risk-tolerant investors far outnumber the number of risk-averse ones. The critical metric to keep an eye on here as well will be volatility. Higher volatility would tip the balance in favor of risk-aversion over the next few days, creating a sell signal in the process.