Potential triggers this week: GDP updates for the US, Germany, and France. Other updates include UK Jobs report, Eurozone business survey, as well as Japan industrial production and retail sales.

Summary: Markets and sentiment continue to diverge, why? Perhaps investors have a greater respect for the new normal the economy is headed into, more awareness of the law of unintended consequences, more familiarity with bubbles’ tendencies to burst in a way and a time they did not expect, or perhaps this divergence comes simply from hot money not knowing its own girth and the tight confines of the china shop it has been squeezing into since April last year. A shift has taken place among some market participants towards the speculative model and away from the fundamental one. The necessity of higher prices is now assumed for even the riskiest of trades (e.g., GameStop). When investors surrender their decision-making to speculative choices, they essentially say: “Let’s try to turn a little money into a lot, and not worry if a lot of money could become a little”. Now, (some) speculation is fine, and trading profits wonderful. But when these motives trump all fundamental considerations, bubbles become more bloated, more vulnerable, and more prone to bursting in increasingly spectacular and economically devastating ways.

Market and investor sentiment divergence continues in the US.

Since the start of the year, markets and investor sentiment have not been in sync, with the former rising in the face of a weakening risk appetite. Sentiment indicators like the ROOF Scores are a quantification of the aggregate cognitive bias of investors at any one time. They predict of how investors are likely to respond to a market-moving news. A weak sentiment means investors will under-react to positive news and potentially over-react to negative one. Last Wednesday, retail sales came out way above expectations (+5.3% vs. +1.1% expected), yet the STOXX USA 900 ended the day down -0.3%. Conversely, last Thursday, initial jobless claims for the previous week were slightly higher than expected (860K vs. 760K expected), and the index ended the day down by -0.6%, twice as much as the previous day with a positive surprise of a much bigger magnitude. Although sentiment is in the neutral zone, it has weakened considerably since December. 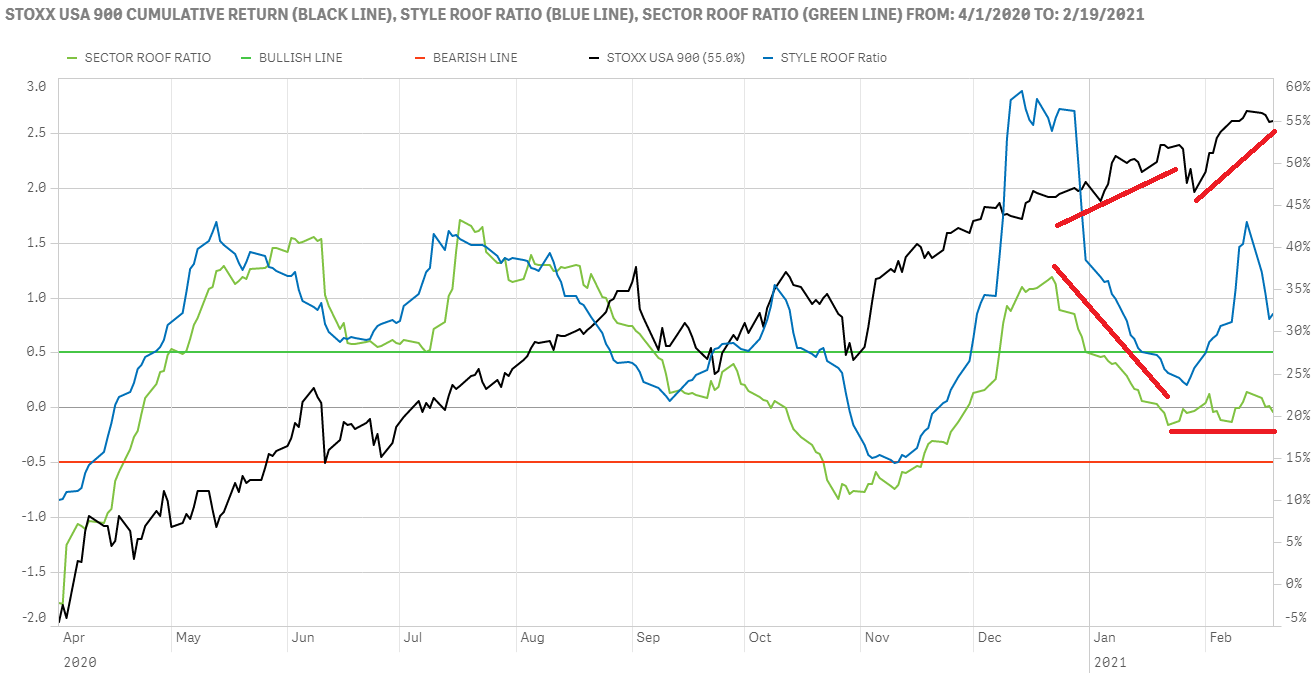 European markets go out on a limb, ignoring a weakening investor sentiment.

Sentiment among European investors weakened further last week with the Sector ROOF ratio (green line) breaching into the neutral zone ahead of the Style ROOF (blue line) variant (top chart). The STOXX Europe 600 index has been on an upswing since late October, initially boosted by improving sentiment, but has diverged from a weakening risk appetite since late January and is now dangerously unsupported by a lack of positive cognitive bias among investors.

The supply and demand for risk is now only narrowly in favor of risk tolerance but the deterioration in risk appetite calls into question the recent upward move by the market (bottom chart). As risk tolerance (green line) declines and risk aversion (red line) rises, investors become increasingly prone to over-react to negative news. Given the recent rally and current lofty valuations, the risk is on the downside if sentiment weakens further or negative news comes out to trigger it.

Sentiment sounds a loud note of caution in both global and Asia ex-Japan markets.

The STOXX Global 1800 continued to ignore a deteriorating investor sentiment last week (top chart). The decline in sentiment which began in late December, has had no impact (to-date) on the index’ performance. Still, investors are becoming increasingly sensitive to negative news and the fact that we have not had any so far in 2021 to trigger an over-reaction on the downside does not mean that we will not get one.

Markets in Asia ex-Japan continue to ignore investor sentiment and are doing it in style (bottom chart). There is a strong divergence between the Sector (green line) and Style (blue line) ROOF ratios, with the former now firmly in bearish territory and the latter breaking into the bullish zone for the first time since late December. The Style ROOF scores have benefitted from the positive performance of Market Sensitivity and Volatility factors as higher volatility was being rewarded.