Summary: It is safe to assume that most educated Times-subscribing US investors were rather flummoxed by last week’s storming of the US Capitol by pro-Trump supporters – some seen wearing farm animal headgear about which the less speculation the better. These events led to a further pullback in sentiment across the civilized world except for developed Europe which is still basking in the glow of a post-Brexit trade deal with the UK. Act II this week will see Democrats in congress try to pin the blame for violence on Donald Trump, arguing he should have predicted the consequences of his untutored Tweets aimed at stirring passions rather than common sense (Why? Salinger wasn’t charged as an accessory to John Lennon’s murder!). For now, investors have chosen to view US political theatrics as unlikely to change the course of the recovery and remain focused on the post-(US) transition, post-Brexit, and hopefully post-COVID-19 economic recoveries.  They remain cautiously optimistic, looking for confirmation of their cognitive bias among economic data releases.

US investors started 2021 in a more cautiously optimistic mood then they ended 2020.

Both ROOF Ratios continued to retrace their recent rise and ended the week at or slightly above the border between the bullish and neutral zones (top chart). The sell signal sparked last week by their recent reversal remains in place but the pace of the decline in sentiment has slowed in the last two days of last week despite the chaos in Washington. Investors seem to have viewed these events as entertainment and an exercise in (thought-less) free speech instead of an attempted coup.

Risk tolerance continued its decline while risk aversion’s rise may have peaked on Wednesday last week (bottom chart). The situation now is reminiscent of August 2020 when markets ignored a change in sentiment for a few weeks before correcting in September. The balance in sentiment still favors risk tolerance but the gap is narrowing, and it seems that investors need more positive news to maintain their confidence in a post-COVID recovery.

Sentiment in Europe, unleashed from its Brexit shackles, shoots up the bullish zone.

Sentiment in Developed Europe shot up post Brexit trade deal in a move reminiscent of the April rebound and which led to the longest continuously bullish period in our ROOF Score history for that market (top chart). Investors there are ignoring new lockdowns and an increasingly macabre COVID-19 death toll in favor of a positive outlook more aligned with their current cognitive bias.

Since the announcement of the trade deal between the UK and the EU, risk tolerance has shot up and risk aversion down (bottom chart). Both are now near their post-COVID-19 crash recovery levels with the supply and demand for risk firmly in favor of risk-taking.  It will take some major bad news to turn European investor sentiment bearish again any time soon. In the meantime, the STOXX Europe 600 index still has some upside before it can be said to have caught-up with its US counterpart. 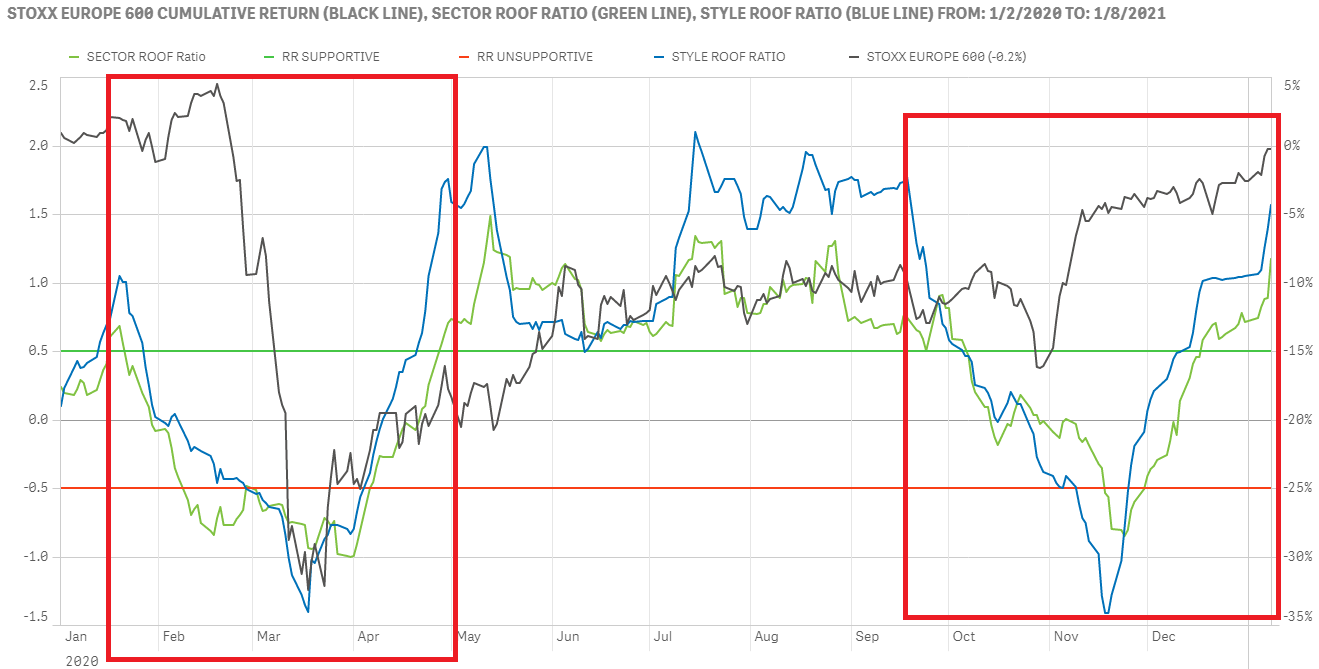 Sentiment breaks with market performance for both Global and Asia ex-Japan investors.

Global investor sentiment continued to retrace its recent surge but remains at or above the border between bullish and neutral (top chart). The STOXX Global 1800 has so far ignored this recent change in sentiment and the absence of (serious) negative news has helped it maintain its trajectory despite a weakening mood, as it did back in August. Back then, however, sentiment continued to deteriorate leading to a market correction in September.

Market performance in Asia ex-Japan is now also at odds with a recently declining sentiment (bottom chart). Investors’ mood remains more positive than negative for the time being but a growing gap between the two is not sustainable. From here, either positive news must confirm the current cognitive bias before it deteriorates further, or markets must pause and wait for sentiment to give it more clear direction.