‘Twas the night before an election
And throughout all the lands,
No risk appetite could be found,
Not even for the FAANGs.

For tomorrow you see
Is a big day for all,
And no one really knows
If stocks will rise or fall.

Sentiment going in
is not very strong,
For bears outnumber bulls,
No one knows for how long.

If the outcome is clear
And uncertainty scant,
Markets will reward those
Who were risk tolerant.

There is also a chance
Clarity could get worse,
And fate will punish those
Who were not risk averse.

We may also not know
For many days to come,
What was hoped by many
And equally feared by some.

Volatility now
Is higher than before,
And it may not take much
For bearish calls to soar

This may seem a bit weak
To those requiring proof,
But sentiment matters,
And we track it with ROOF.

As both uncertainty and downside risk increase ahead of the election, US investor sentiment takes on a strongly risk-averse tone. The Sector ROOF ratio (green line) dove deeper into bearish territory last week while the Style ROOF ratio (blue line), now seems headed for the border between neutral and bearish. Given this negative cognitive bias, investors under-reacted to positive earnings news from four of the FAANGs and over-reacted to negative news on the Covid-19 situation.

To be fair, sentiment peaked back in July, when the US was experiencing its second wave of new infections (see below), and risk aversion (red line in below chart) bottomed out and started its slow climb. Risk tolerance (green line) then peaked in August and begun to decline from its year-high, to reach a new year-low last week. The last time risk tolerance was that low was in March of this year and it took a massive stimulus package to get it to start climbing again.

The uncertainty of a US presidential election is not happening in a vacuum, and the Covid-19 pandemic is providing a deafening background noise.  For all the talk of a second wave, the data points to a third wave, the US having already experienced a second wave during July. 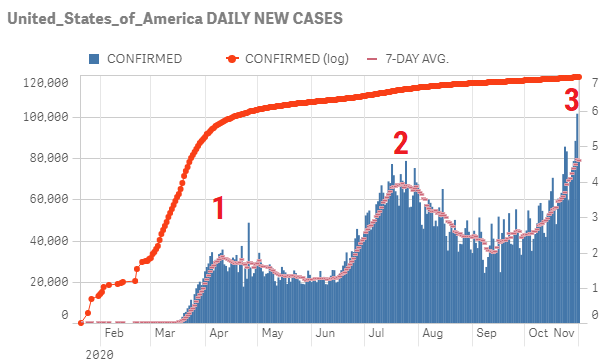 Western Europe is experiencing a strong second wave, just ahead of winter, and lockdown talks there is the main driver of rising risk aversion. Experts seem to predict a continuing wave in the short-term which means negative background noise will continue to weigh on sentiment. 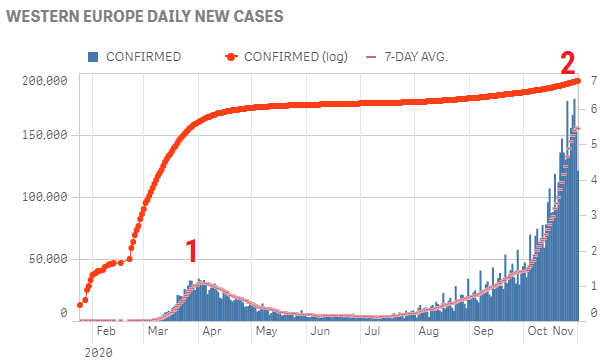 Looking at the 2016 election, we see a similar pattern. Sentiment peaked in the summer and declined sharply in the weeks before the election as the outcome became increasingly uncertain. Back then Clinton held a commanding lead in the polls, right up to election day, but growing noise around the electoral college math and an increasingly divisive campaign started to weigh on sentiment.  Although Trump was a surprise winner, and not much was known about him politically, investors only new he did not like taxes or regulations and was overwhelmingly pro-business. That was enough to get sentiment to climb again post surprise win. They know more about him today.

The same pattern of rising risk aversion pre-election can be seen in Obama’s reelection win of 2012 as well. This election resulted in a divided government with a Democrat President and a Republican Senate, which historically has been the preferred situation for markets, helping sentiment recover.

MIT Prof. Rigobon: Dealing with confusion and incongruity in the ‘ESG data zoo’

Video: Qontigo’s Rob Reina on ETFs vs. Direct Indexing: What Does the Future Hold?