Trading and pricing of futures on the EURO STOXX 50® Volatility Index (VSTOXX®), the gauge for European equity volatility, have picked up amid recent market pullbacks. If history is any guide, interest in the contracts may rise further in the next couple of months.

More than 1.7 million VSTOXX futures traded at Eurex in January, the highest monthly count since the COVID-19 pandemic hit markets in March 2020 and a 51% increase from January 2021 (Figure 1). Since the start of the year, the April futures, which will reflect any market swings caused by the upcoming presidential elections in France, have traded at a small premium relative to neighboring expiries. In the 2017 French vote, the VSTOXX index more than doubled over five weeks, starting in mid-March.

In 2017, the VSTOXX went from 11 on March 17 to 25 on April 21 (Figure 2). Its US equivalent, the Cboe Volatility Index® (VIX® Index), climbed from 11 to just 15 in the same period, indicating that the source of volatility was mainly a European affair.

Market volatility has risen this year, and stocks have dropped, as investors assessed the potential impact of higher US interest rates. The VSTOXX, which tracks EURO STOXX 50® options prices, climbed to 32.7 on January 24 from 19.3 at the end of December. Since then, the index has pared the advance to 31.2. A higher VSTOXX reading suggests investors are paying up for options premia that offer insurance against stock price drops. The index jumped to 86 in March 2020 as governments restricted activities.

The first round of the 2022 French presidential election, scheduled for April 10, could be a key tail risk for markets. If no candidate obtains more than 50% of votes, a runoff vote will be held on April 24. According to a Kalman poll published on Politico on February 8, the elections may mirror those of 2017: incumbent President Emmanuel Macron (24% of the vote intention) and far-right candidate Marine Le Pen (17% support) would face each other off in a second round.

In the 2017 French elections, which took place on April 23 and May 7 of that year, political risk ran high amid a fragmented electorate and a poor showing from France’s traditional parties. Today’s situation is similar.

VSTOXX April 2017 futures reflected since the start of that year the expected move upwards in volatility, trading at a premium of as much as 10 points to the March and May expiries (Figure 3, left chart). The May futures dipped after the first and second rounds of votes. In the end, centrist Macron won wide support to beat Le Pen, who had campaigned against globalization and with strong criticism of the European Union.

March 2022 VSTOXX futures traded at 23.4 on February 10. The April contracts, which expire April 20 and reflect the price of options expiring in May, were priced at 24. May futures traded at 23.7. In 2022, the April contracts have traded, on average, 0.4 points higher than the March futures and 1 point higher than the May contracts. That is, the premium has not yet reached the level of five years earlier (Figure 3, right chart). 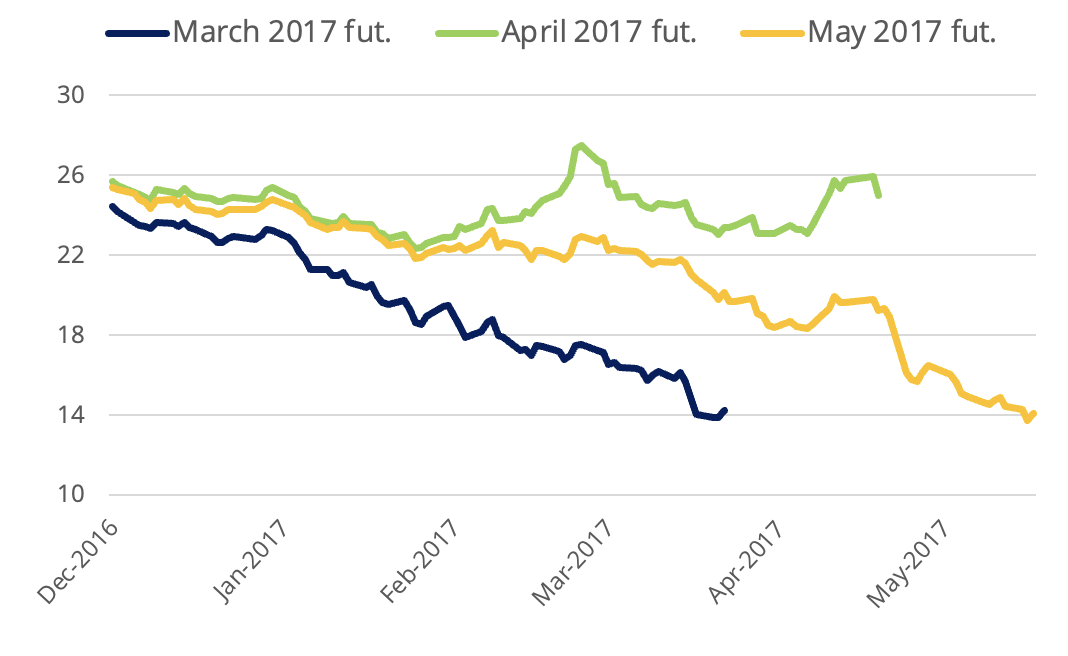 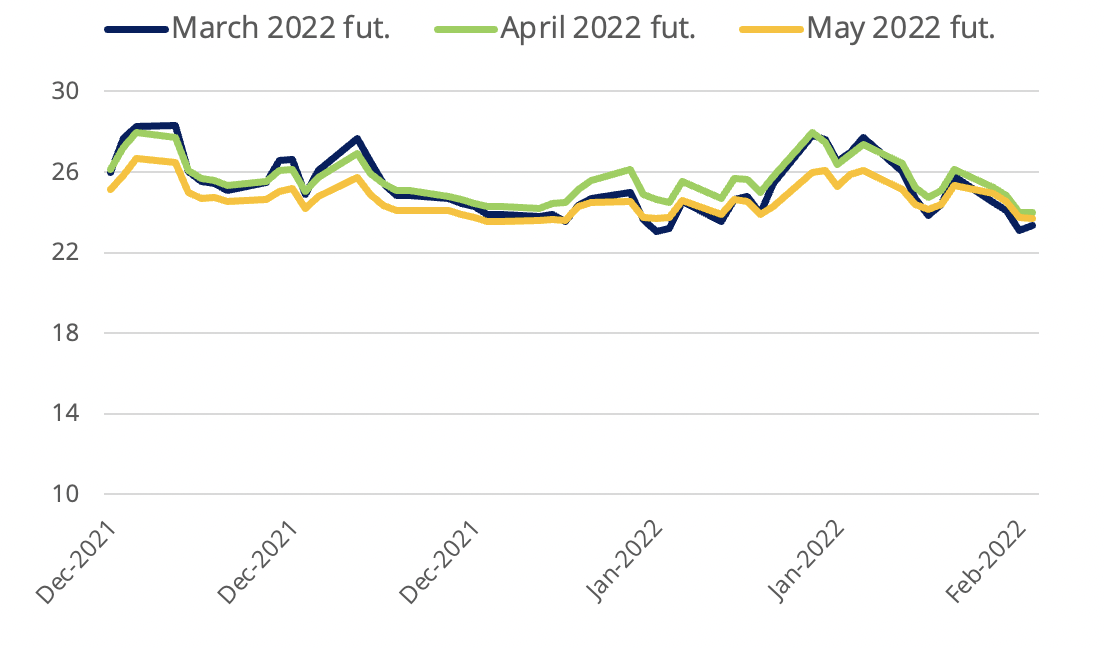 Running up the last French elections in 2017, clients approached the event with a so-called ‘futures calendar fly,’ explains Sascha Semroch, Product Development Manager at Eurex. In it, a trader buys two futures exposed to the event risk, and shorts one each of futures that expire prior and after the event to control the trade’s overall risk exposure.

“The calendar fly allows the user to control for overall shifts in the term structure and at the same time have a dedicated exposure towards a specific expiry,” said Semroch.

VSTOXX futures can be a more accurate market hedge than other products when trading around specific events. The futures allow investors to trade up to eight months in advance the risk of the 30-day period around the event. On the other hand, EURO STOXX 50 options reflect spot volatility. As such, they capture the event along with the long-term performance that precedes it.

VSTOXX futures have in the past reflected traders’ interest to hedge or monetize event risk around Italian and German elections, as well as the Brexit vote in June 2016. The futures’ target expiry is the VSTOXX expiration that settles into the EURO STOXX 50 options that are the front month when the event takes place.

A contest between Macron and Le Pen, just as it happened five years ago, favors the current president by a comfortable margin as Le Pen is seen as too extremist by much of the electorate. Still, with just under two months left before the elections, there is room for shifts in vote intention and questions remain about who the smaller candidates and key political figures in the country will publicly support in the two rounds. The runoff campaign could also look different if, instead of Le Pen, it is the more palatable Valerie Pecresse of the center-right Les Republicaines who challenges Macron.

Of course, other developments may ultimately make the French elections just a sideshow in the risk scale. These include rising bond yields, a more-hawkish-than-expected turn by major central banks, and a potential Russian invasion of Ukraine. Such events may keep volatility high, and European traders alert, in coming weeks.

Qontigo is a leading global provider of innovative index, analytics and risk solutions that optimize investment impact. As the shift toward sustainable investing accelerates, Qontigo enables its clients—financial-products issuers, asset owners and asset managers—to deliver sophisticated and targeted solutions at scale to meet the increasingly demanding and unique sustainability goals of investors worldwide.

Qontigo’s solutions are enhanced by both our collaborative, customer-centric culture, which allows us to create tailored solutions for our clients, and our open architecture and modern technology that efficiently integrate with our clients’ processes.

Part of the Deutsche Börse Group, Qontigo was created in 2019 through the combination of Axioma, DAX and STOXX. Headquartered in Eschborn, Germany, Qontigo’s global presence includes offices in New York, London, Zug and Hong Kong.