When 40 is the New 30 – What DAX Gains Following Enlargement

Key takeaways (Click on the points below to jump to each respective section:):

The expansion of DAX from 30 to 40 constituents resulted in a less concentrated and more diversified index, with a slightly lower risk forecast, and a sector allocation better aligned with the economic reality of the broad German market. At the same time, the benchmark’s profile did not change significantly in terms of style factor exposures.

The most comprehensive index reform in the history of the DAX started in August 2020. Qontigo published the revised rules for the DAX Selection indices on November 24, 2020, and these were successively introduced starting in December 2020. The new composition of the German flagship index was announced on September 3, 2021 and took effect on September 20 this year.

It is key to note that these changes in DAX did not result in the creation of a new index, but rather it is the same index with amended rules, which were implemented as part of the regular DAX index review.

In this article we analyze the effect of the ten new components on the DAX, by comparing the enlarged DAX with 40 constituents to the historical DAX with 30 constituents. 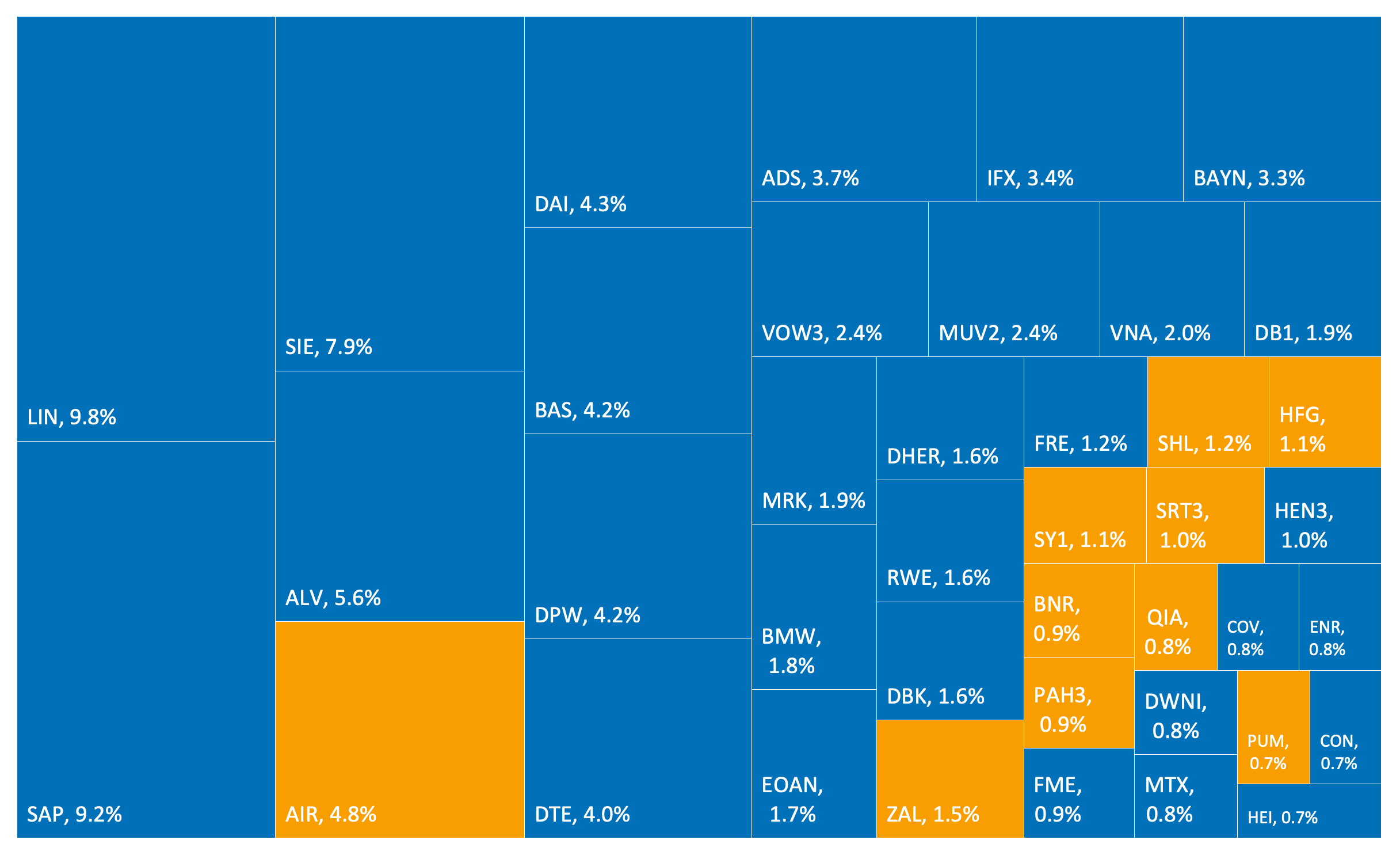 Airbus — the only new entrant with significant weight

Figure 1 above shows the DAX’s 40 constituents and their weights on September 20, with the new assets marked in orange. Out of the ten new stocks in DAX, Airbus SE (symbol: AIR) is the largest, with its weight in the index nearing 5% on September 20. The other nine entrants have weights that are lower than 2% and smaller than most existing constituents. The ten new stocks represent in total about 14% of the index.

Airbus became the fifth largest stock in the enlarged DAX. The other nine biggest stocks in the enlarged DAX were existing assets and their weights have, unsurprisingly, decreased from those in DAX with 30 constituents (Figure 2). Interestingly, there was no need to apply to the revamped DAX the component capping rule that limits asset weights at 10%, as all stocks’ weights were below 10%. In particular, the weights of Linde Plc (LIN) and SAP SE (SAP) fell below 10% after the extension to 40 constituents. 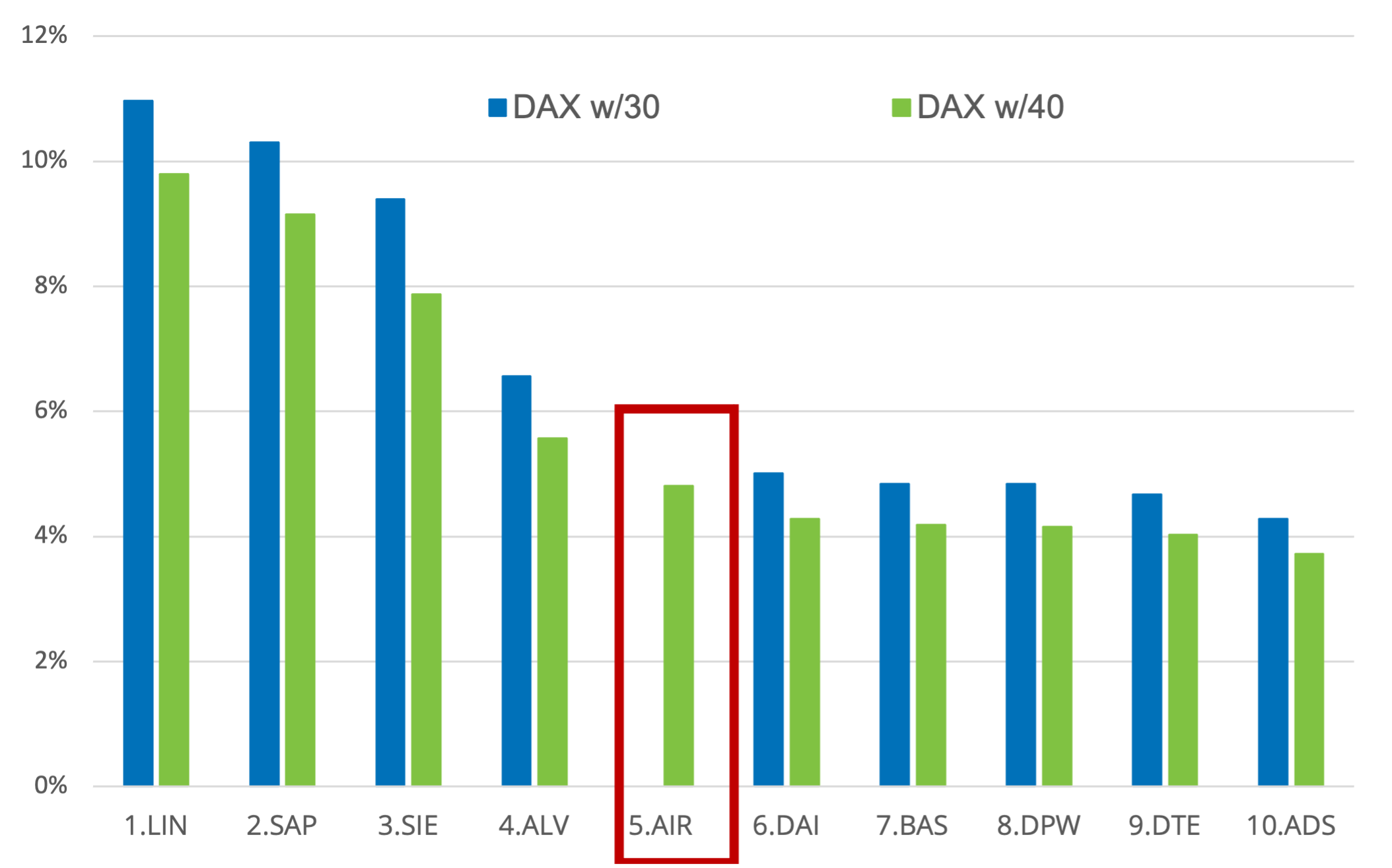 Turning to the risk forecast3 of DAX, or the index’s expected volatility, this decreased slightly after the addition of the ten new constituents. The revamped DAX recorded a total risk of 14.59% on September 20, 2021, down ten basis points from that of the historical DAX (14.69%).

Figure 3 – Risk decomposition: DAX with 30 vs. DAX with 40 constituents 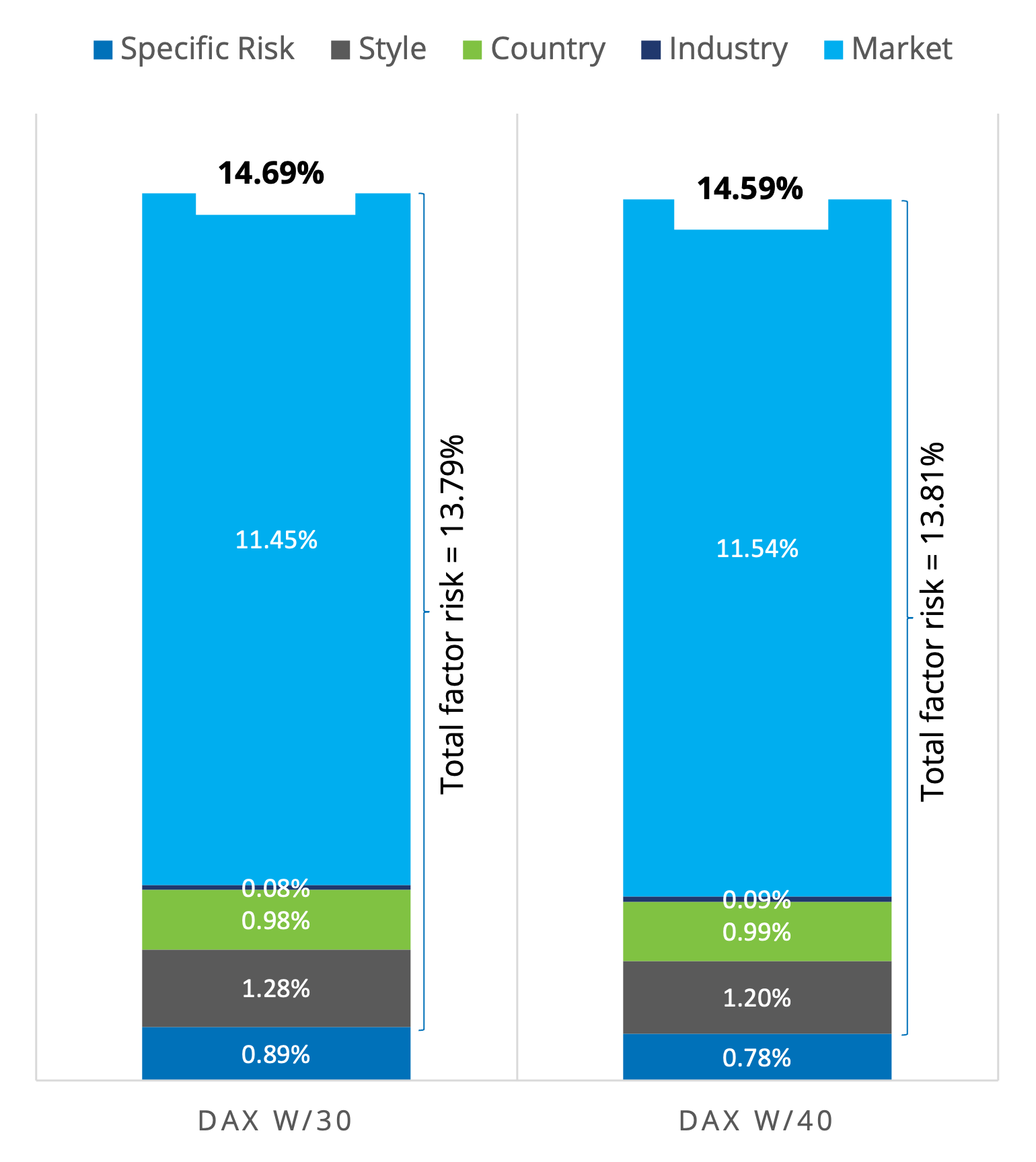 As expected, the asset diversification ratio of the enlarged DAX is lower than that of HDAX and the Broad Market portfolio (given the larger number of constituents in these two portfolios), but not so much.

The normalized Herfindahl-Hirschman Index (HHI) for the enlarged DAX decreased, indicating less concentration in the index, and it is even lower than that of HDAX and the Broad Market portfolio.

Figure 4 – Index diversification and concentration as of September 20, 2021

Industrials, Consumer Discretionary and Health Care were the only sectors to see an increase in their weights after the DAX revision (Figure 5)6. Industrials (home of Airbus) replaced Materials as the largest sector in DAX. Real Estate became the second-smallest sector in the enlarged DAX.

Figure 5 – Sector weights: DAX with 30 vs. DAX with 40 constituents 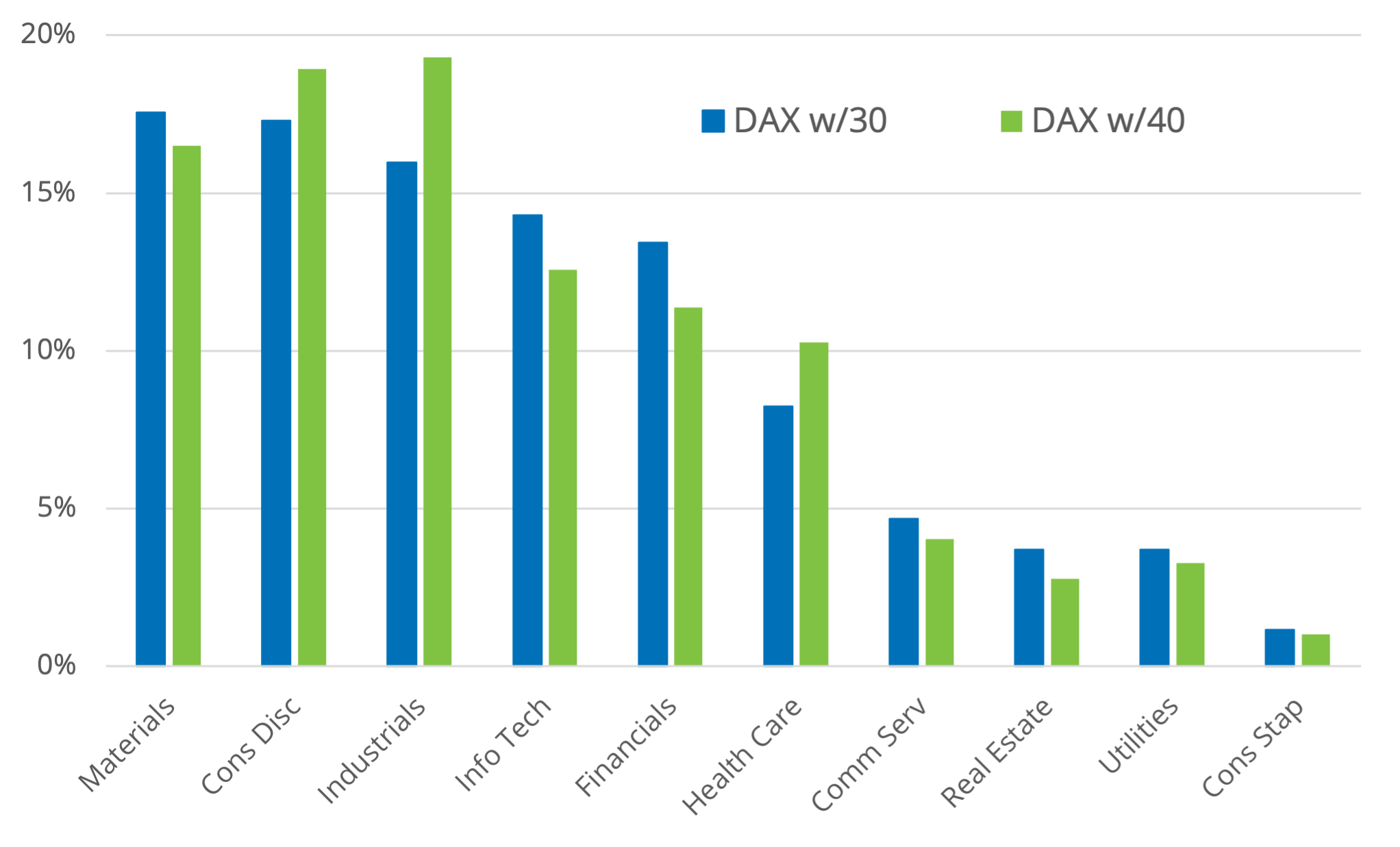 In terms of style factor exposures, the nature of DAX did not change much7, except for Dividend Yield, where the sign flipped (Figure 6).

Exposures to Market Sensitivity in the historical and revamped DAX indices were the highest positive ones among all style factors in the EU4 fundamental medium-horizon model, and were both of a similar level. That is, both indices contain high-beta names that typically move in the same direction with the developed European market.

While lower than that of the historical DAX, the larger DAX’s exposures to Liquidity, Size, and Leverage remained strongly positive. The positive exposure to Size and Liquidity is not surprising as DAX with 40 stocks contains some of the largest and most liquid names in the model universe. Larger stocks also tend to have higher levels of debt (hence the positive exposure to Leverage). Put another way, the DAX’s 40 components are more liquid, larger, and more leveraged than the respective averages in the model universe, but not more than the components in the incumbent DAX.

The exposure to Value saw one of the largest declines, though it remained positive, indicating that stocks in the revamped DAX tend to be more expensive than those in the historical DAX, but cheaper than assets in the model universe.

Both 30- and 40-stocks indices had negative exposures to Momentum, Volatility, Profitability and Growth, but DAX with 40 had smaller negative exposures to these style factors than did the DAX with 30. That is, the enlarged DAX showed slightly improved momentum, profitability and growth, but leans toward higher-volatility stocks than its original version.

Exposures to Earnings Yield and Exchange Rate Sensitivity were small and negative for both DAX iterations, but they were slightly higher in magnitude following the DAX overhaul. The small negative exposure to Earnings Yield indicates that DAX (either with 30 or 40 components) contains stocks with lower earnings yield than the average in the model universe. The small exposure to Exchange Rate Sensitivity signifies that only a small proportion of the 30 and 40 companies’ business may come from non-domestic sources.

Note, however, that this is a point-in-time analysis and these style factor exposures may change in the near future. 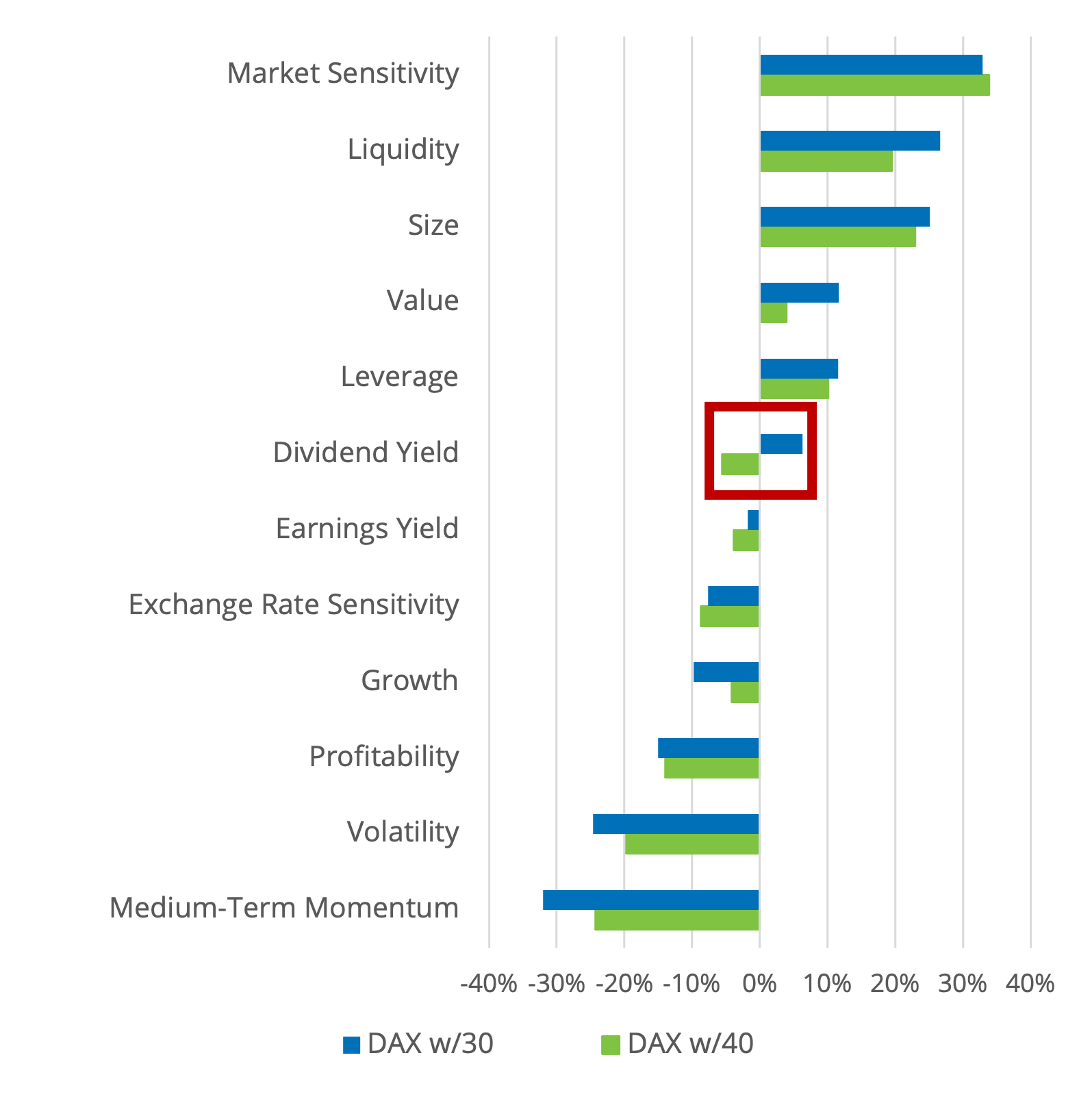 Exposure to Momentum saw one of the largest declines in absolute terms from DAX with 30 stocks to DAX with 40, although it remained negative. The recent rise of the ten stocks that were added to the enlarged DAX may be a good explanation for this phenomenon, as these stocks would have experienced higher momentum in recent months as traders and investors possibly bought the shares ahead of their inclusion in the German benchmark.

To test this theory, we constructed a portfolio comprised only of the ten new stocks, by normalizing their weights in DAX as of September 20, 2021. This portfolio greatly outperformed the original DAX between November 2020 and September 2021, as shown in Figure 7.

However, we don’t expect the outperformance of the 10-stock portfolio to be a long-term trend, and therefore the enlarged DAX could revert to a higher negative exposure to Momentum, similar to that of DAX with 30 constituents.

The implication of the enlarged DAX’s negative exposure to Momentum is that, although the ten new stocks had better momentum than the 30 already there, the German market as a whole has probably done worse than other European markets. 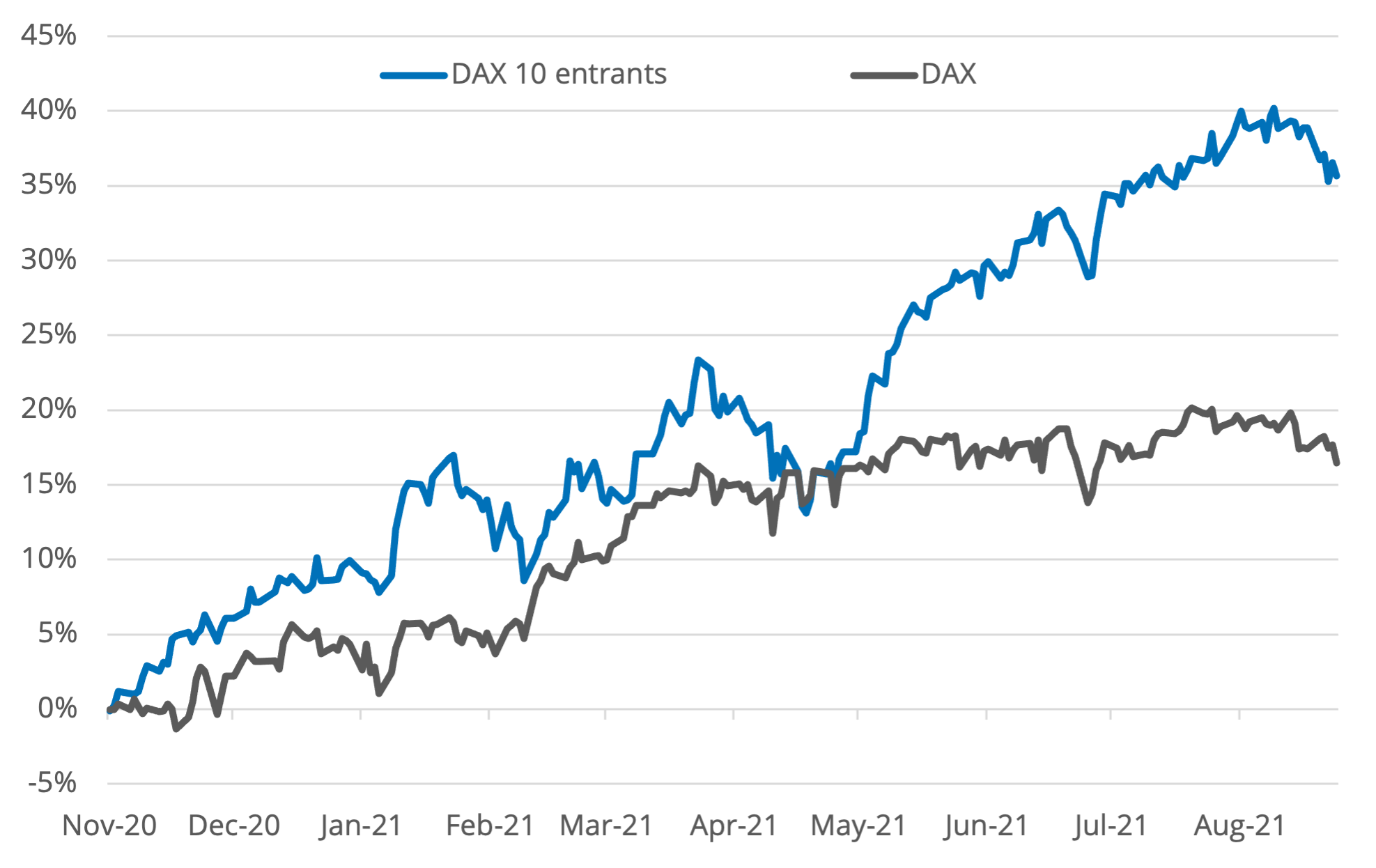 In summary, our analysis shows that the DAX enlargement contributed to the index’s diversification, decrease in concentration, stability and market representation, and resulted in relatively limited changes to the benchmark’s style exposures. In most cases, those changes were not of significant nature.

1 HDAX contains 100 large and medium-sized German stocks, combining the member companies of DAX, MDAX, and TecDAX.
2 In this analysis, we used Axioma’s Market Portfolio Germany, which contains large-, medium- and small-cap stocks (AMP DE LMS) to represent the broad German market. The universe had 168 holdings on September 20, 2021.
3 Forecast risk is the expected volatility of the benchmark DAX over a 3- to 6-month horizon, as measured by Axioma’s Developed Europe fundamental medium-horizon model (EU4).
4 Specific risk is the non-systematic risk in Axioma’s Developed Europe fundamental medium-horizon model. The components of factor risk are market, country, industry and style risk. Market risk is typically the major component of risk for a benchmark, and in this case refers to the Developed Europe market risk. Country and industry risk refer to the aggregate risk of the countries and industries in the EU4 model, respectively. Style risk is the aggregate risk of the style factors in the EU4 model (e.g., Momentum, Value etc.).
5 The diversification ratio of a portfolio is defined as the ratio of the weighted average of the total risk forecasts for the assets in the portfolio divided by the total risk forecast for the portfolio. If all correlations were one, the numerator and denominator would be the same, the diversification ratio would be one, and there would be no diversification benefit of adding more stocks to the portfolio.
6 GICS 2018 Classification was used for this analysis.
7 As measured by Axioma’s Developed Europe fundamental medium-horizon model.