Not so fast. Factor investing is alive and doing well!

Factor investing has received much attention in recent years as a source of above-market returns. It’s also been the target of some criticism, mainly due to recent years’ underperformance of styles such as Value and Size.

Contrary to skeptics’ views, a well-constructed portfolio that invests along robust factor lines can and has produced long-term outperformance. In fact, 2021’s return was the highest in years.

Qontigo recently launched the STOXX Equity Factor Indices, which serve as underlying benchmarks for a revamped suite of Equity Factor ETFs from BlackRock’s iShares. The indices seek to maximize the allocation to a multi-factor alpha signal, hence avoiding the cyclicality pitfalls of single factors, while limiting undesirable exposures or deviations from the benchmark. One of the two new indices, the STOXX® U.S. Equity Factor, has beaten its parent index, the STOXX® USA 900, by roughly 126 basis points a year since 2003.

Far from losing interest in the strategy, investors continue to pour money into factor-based strategies, which are gaining in sophistication thanks to better risk models and portfolio construction techniques.

A new white paper1 from Melissa Brown, Managing Director for Applied Research at Qontigo, looks at the performance of an alpha forecast and its components, and how they drove active returns in recent years in an index like the STOXX U.S. Equity Factor.

The study tracks the performance of a factor-mimicking portfolio (FMP) derived from the STOXX USA 900 that gives exposure to a ‘pure’ factor return, in this case a multi-factor alpha forecast. An FMP is a long-short, dollar-neutral portfolio that has an exposure of 1 to the factor in question and no exposure to any other factor. In other words, it is essentially the ‘best-case’ scenario for investing in the factor concerned.

The FMP has generated a return of 40 percentage points since 2000 with no market exposure, the study shows. Its return has been consistently positive, thereby proving its value as a basis for building the index.

The analysis then digs even deeper to examine the five factor components of the alpha score described above: Value, Momentum, Quality, Low Size and Low Volatility.

Since 2002, four of the five styles have produced cumulative alpha, and only one – Value – has detracted from benchmark returns.

Obviously, the cumulative outperformance conceals the uneven character of calendar annual returns. As investors know, factors can be cyclical and, most importantly, un-correlated with each other. This is in itself a good source of diversification. Value suffered in the later years of the study, hurting its long-term return, but even so, it fared well when other factors did not, thereby boosting overall return from alpha.

There was only one year in the 20-year test period in which all factors produced positive returns – 2008, the study shows. Three or four factors fared well in most years. None of the factors were able to produce positive returns in the worst year for alpha, 2020.  (Figure 1). 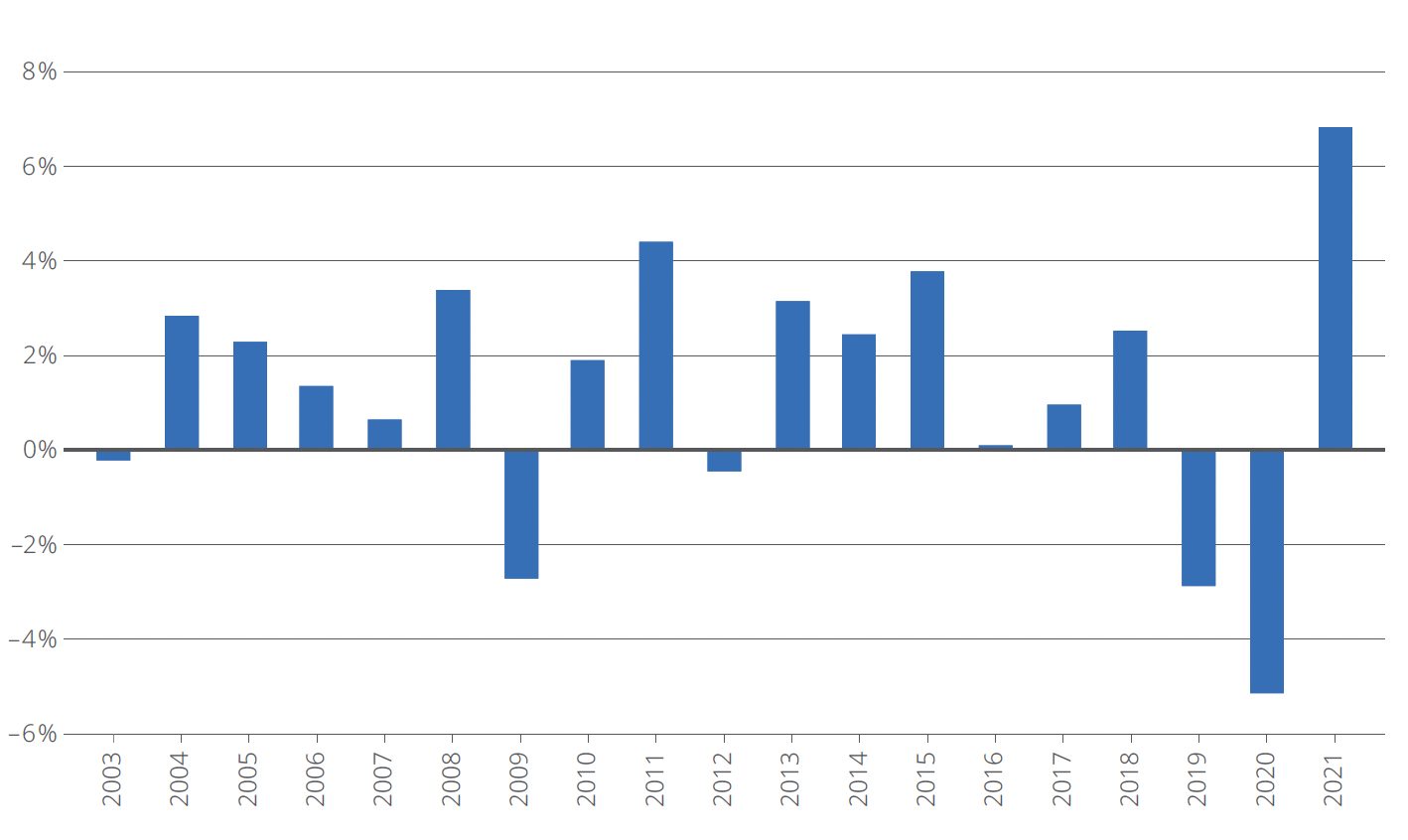 “The idea behind choosing several factors is that when one doesn’t ‘work,’ another will pick up the slack,” Brown writes.

“True, 2019 and 2020 were disappointing years, but every style of investing has good and less good periods of performance.”

“In our experience over at least the past 20 years (and even longer in some cases), poor periods tend to be followed by unusually good ones,” Brown adds. In 2021, “alpha produced a return that was more than two percentage points higher than in 2011, the next-best year.”

“Rumors of factor investing’s demise have been greatly exaggerated,” she concludes.

We invite you to download and read the white paper.