In the news this week: Most economic data releases still reflect only February data. Thursday will see US Jobless Claims for the week ending April 4th as well as a consumer sentiment survey. Saudi Arabia and Russia have postponed their Monday meeting to discuss oil production cuts to Thursday. Earnings season for Q1 2020 continues. Look to Delta, Samsung, and Fast Retailing for hints of CEO guidance.

Summary: Investors in every market we cover are less bearish than a week ago, and this across both variants of the ROOF methodology (style and sectors). Interestingly, Europe is the least bearish in both. This may be related to the shape of their pandemic exponential growth curves which have started showing signs that the preventive measures are working. This in turn seems to have indicated a light at the end of the tunnel for investors in other market whose curves are not yet showing signs of success. In the absence of factual fundamental data, time, seems to have become the main forecasting tool. A short-term lockdown means the current stimulus packages will be enough to prevent a depression (not a recession mind you). A longer-term lock-down, means more help may be needed. For now, it seems, investors are betting on a short-term period. In the coming weeks, they will hear about the rest of the year directly from CEOs; their guidance will be key in restoring risk appetite for a sustained rally.

Sentiment in the US improves greatly but remains just shy of the neutral zone.

Two weeks ago, we saw sentiment starting to improve but the divergence between the style-based and sector-based ROOF Ratios left us worried about the possibility of a bear trap rally. This past week, the sector-based ROOF ratio made a huge comeback and seems headed together with the style-based ratio to the neutral zone. This means investors are gradually losing their bearish confirmation bias which will make it easier for the market to weather bad news when it comes. For now, investors seem to focus on the positives. 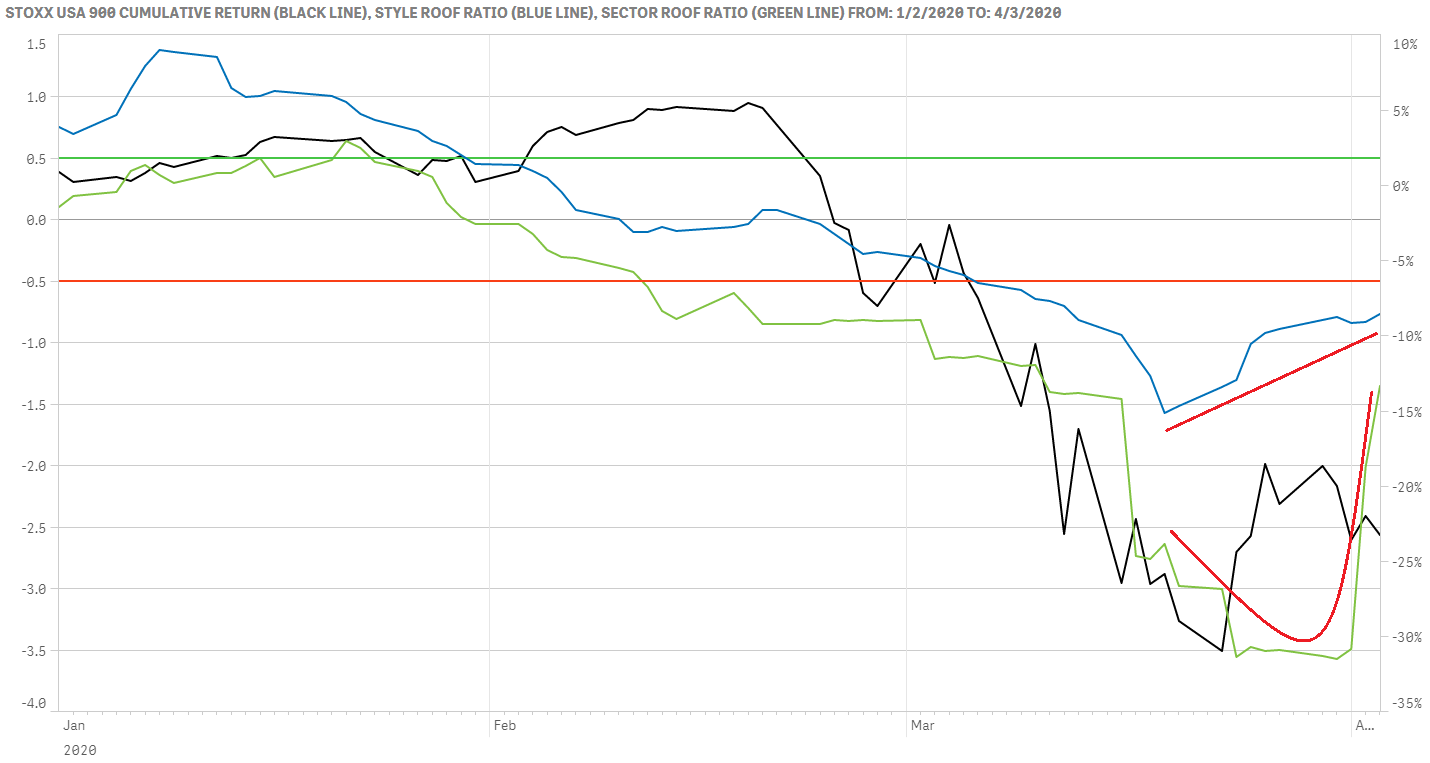 The improving sector-based scores were helped by the improving popularity of the Real-Estate, Materials, and Industrials sectors (all risk tolerant), offset by a declining popularity for the risk averse sectors of Utilities, Energy, and Telecommunications Services. This helped the overall market’s daily ROOF Score to move from a negative bias on March 27th (left chart) to a positive bias on April 3rd (right chart).

Sentiment in Developed Europe continued to improve as signs that the measures taken to-date to stop the spread of the deadly virus are starting to improve for two of the worst hit countries.

The continued decline in risk aversion from the highs reached during the week of March 20th has helped sentiment improve further in Developed Europe. Our risk aversion curve has followed a similar shape to the exponential growth curve for Spain and Italy (see below).  As the latter is starting to show signs of success in the fight against the spread of the disease, investors’ confirmation bias is getting less negative.

The sector-based ROOF Ratio has already crossed into neutral territory, removing investors’ bearish confirmation bias. It had become bearish about three weeks ahead of the style-based ROOF Ratio, perhaps the latter will cross into neutral territory as well by the end of this week. This will signal an end to the over-reaction to negative news and if sentiment improves further, may be the start of positive bias. 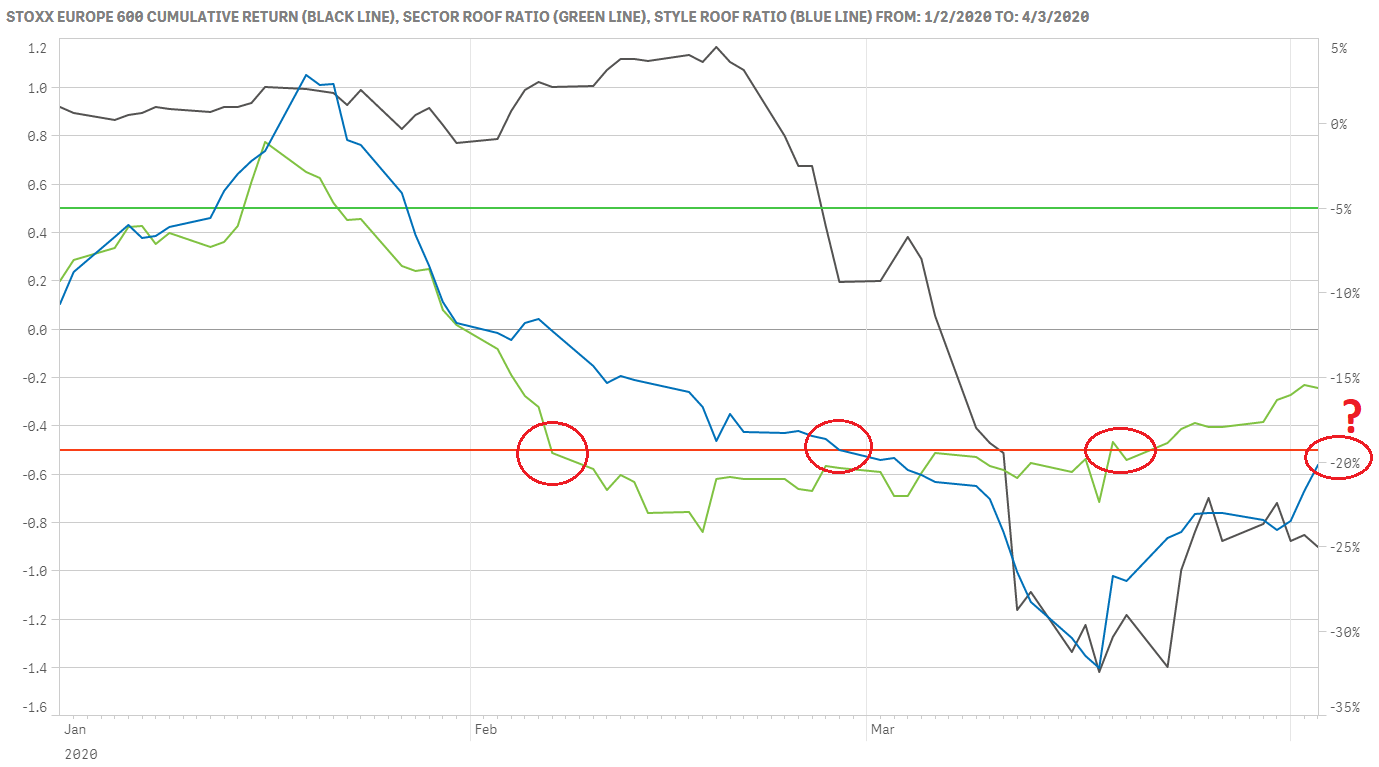 As in other markets we track, sentiment continued to improve this week as investors chose to focus on metrics indicating that the current measures to fight the spread of the corona virus are working rather than the lagging indicator of mounting death toll.  The current direction is supportive of a market rally but the bearish level it remains at means that sentiment can quickly reverse on bad news as there remains a substantial amount of negative confirmation bias. Risk aversion levels for global developed markets have only marginally declined while risk tolerance levels have remained flat (at low levels) indicating that risk appetite hasn’t made substantial progress among those investors.

This lack of confidence in a positive outcome in contrast to other markets may reflect the purely domestic nature of stimulus packages thus far.  Some may be big enough to be effective in their country, but what about other countries without the resources?  What if some of these packages are not enough to prevent a deeper recession than anticipated? It seems global investors are less convinced about the efficacy of these local packages than domestic investors.

Tensions also seem to be reflating between the US and China. The US economy is expected to go into a technical recession in the middle of a presidential campaign and politics demands that a scapegoat be found to take the blame.  Global investors may be more worried than their domestic counterpart about who that will be, and what it will mean for global trade if Tariff-Man has a sequel.

The other worry for global investors has to do with large emerging markets who are the bottleneck in the global supply chain. What if India follows the fate of Italy and Spain, but on a much larger scale? What if China has a resurgence of cases after re-opening too early? 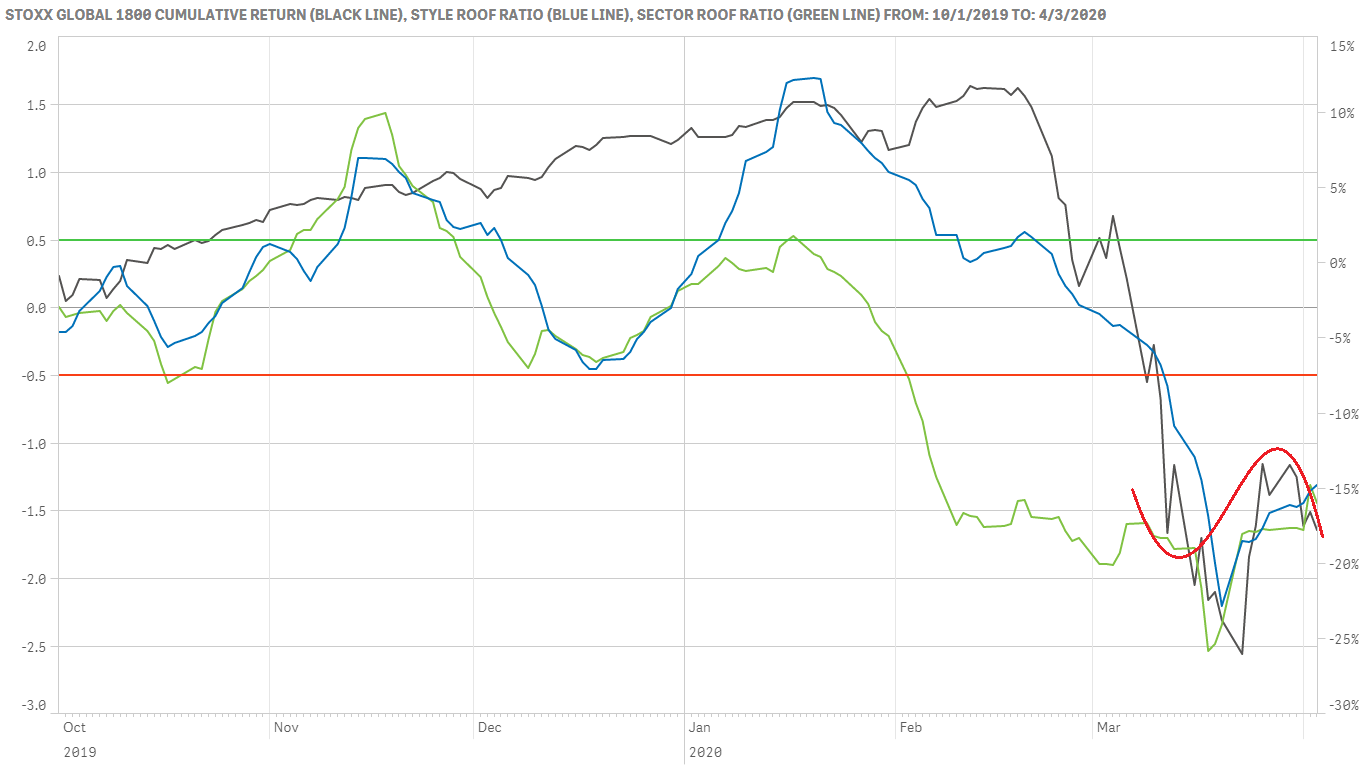