In the news this week: Late in the week investors will watch to see if bad US manufacturing PMI data last week is followed by soft non-manufacturing PMI this week. The US will also release the December Jobs report.  The key for the US economy, as always, is whether the US consumer holds up. In China, Services PMI and CPI and PPI data will be out this week.  Also out will be German factory orders and Eurozone inflation data. And of course, whatever move Iran or the US make in their ongoing conflict.

Summary: 2020 started with a BANG, literally. Investors are hoping it won’t end with a BOOM. A sharp reversal of sentiment in APAC ex-Japan, Developed EU, and Emerging Markets, with the UK being the only market from Christmas’ ‘naughty’ list not to make a full recovery.  Regional markets lead with optimism in the first week of the year, with APAC ex-Japan, Emerging Markets, and Developed Markets recording risk tolerance levels above their respective 98th-percentile levels (too good to be true).

The sharp change in the ROOF score is explainable by the fact that almost all metrics changed signs during those two weeks with all ten becoming positive for risk tolerance from a nine-to-one ratio in favor of risk aversion back on December 20th.  Profitability, the last hold-out style for risk aversion, finally gave up on Friday.  Investors went from favoring large cap, low volatility, low beta, value stocks that pay dividends, to preferring small cap, high volatility, high beta, growth stocks with lots of leverage and no dividend payout. Too early to tell if this is fundamentally driven by a dramatic change in investor’s outlook for global growth in 2020 or just some short-term contrarian style rotation strategy.  The declining market volatility also helped the risk tolerant side and after last Friday’s US airstrike, that may soon change. 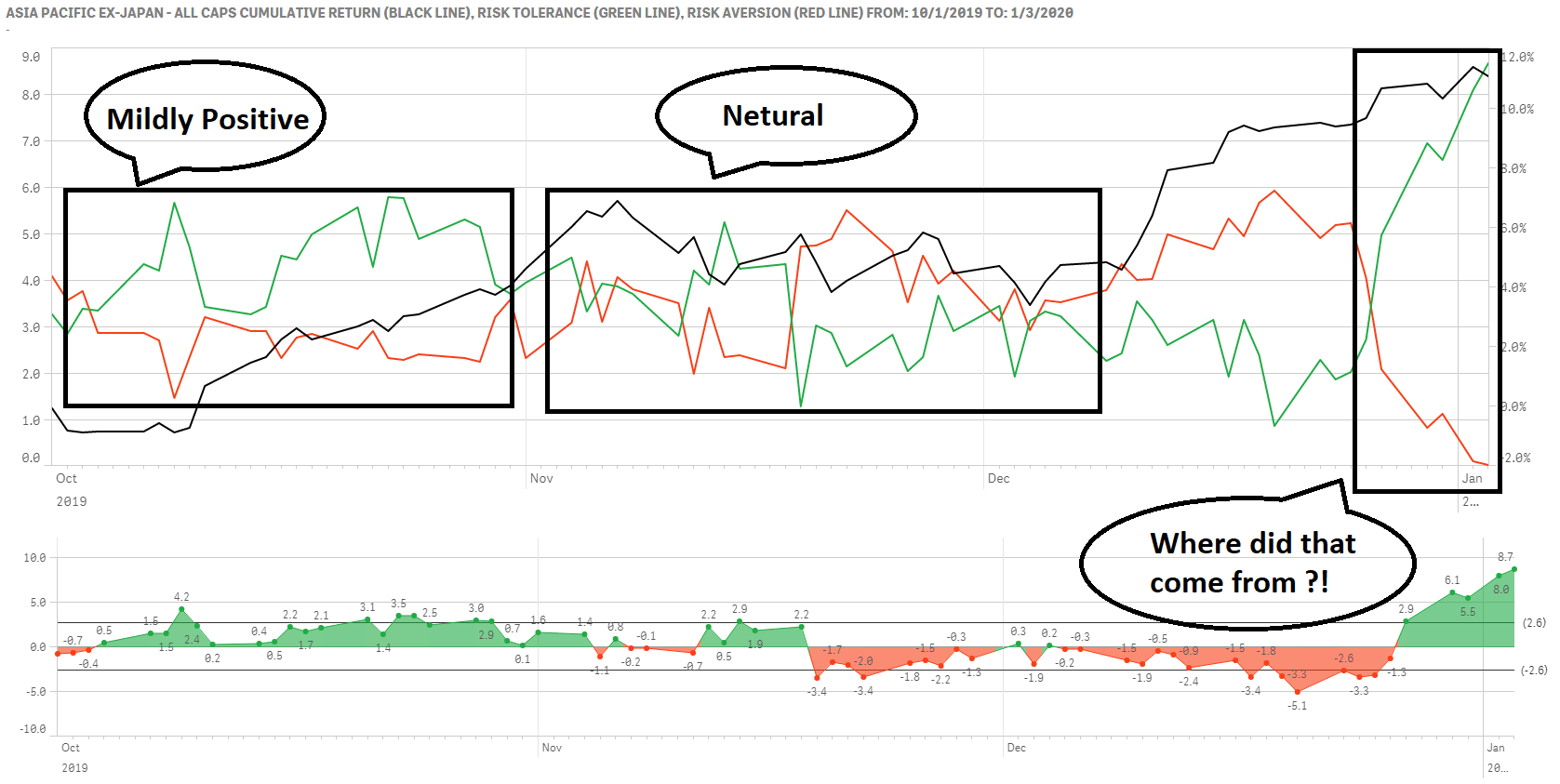 Investors in the UK were very negative going into the Christmas week but seem to have found a way to carry on in the first week of the new year.

With a new majority government, one monkey is off their back, but the prospect of a hard Brexit on January 31st cannot totally be ruled out, and even if a deal is signed, there still remains quite a lot of unanswered questions as to what exactly it will mean for the UK economy going forward.

The British people have given their conservative party a majority government. Now they’re asking them what they will do with it.  It seems that UK investors are in a wait-and-see mode with neither risk tolerance nor risk aversion styles being able to assert itself over the other.  Volatility has been rising since late November in that market which has constrained the ranks of risk tolerant investors (most of the AUM is risk-aware), if markets are given a reason for volatility to decline, the two risk-based metrics could turn in favor of risk tolerance and give sentiment some direction.  Realistically, the situation is likely to remain as it is given the lack of details on the post-Brexit proceedings. Look for sentiment to remain neutral until the Q4 earnings seasons kicks off, more details on a post-Brexit Britain are disclosed, or economic data starts to get worse. There is no sentimental trend at this point so it could really go either way in that market. 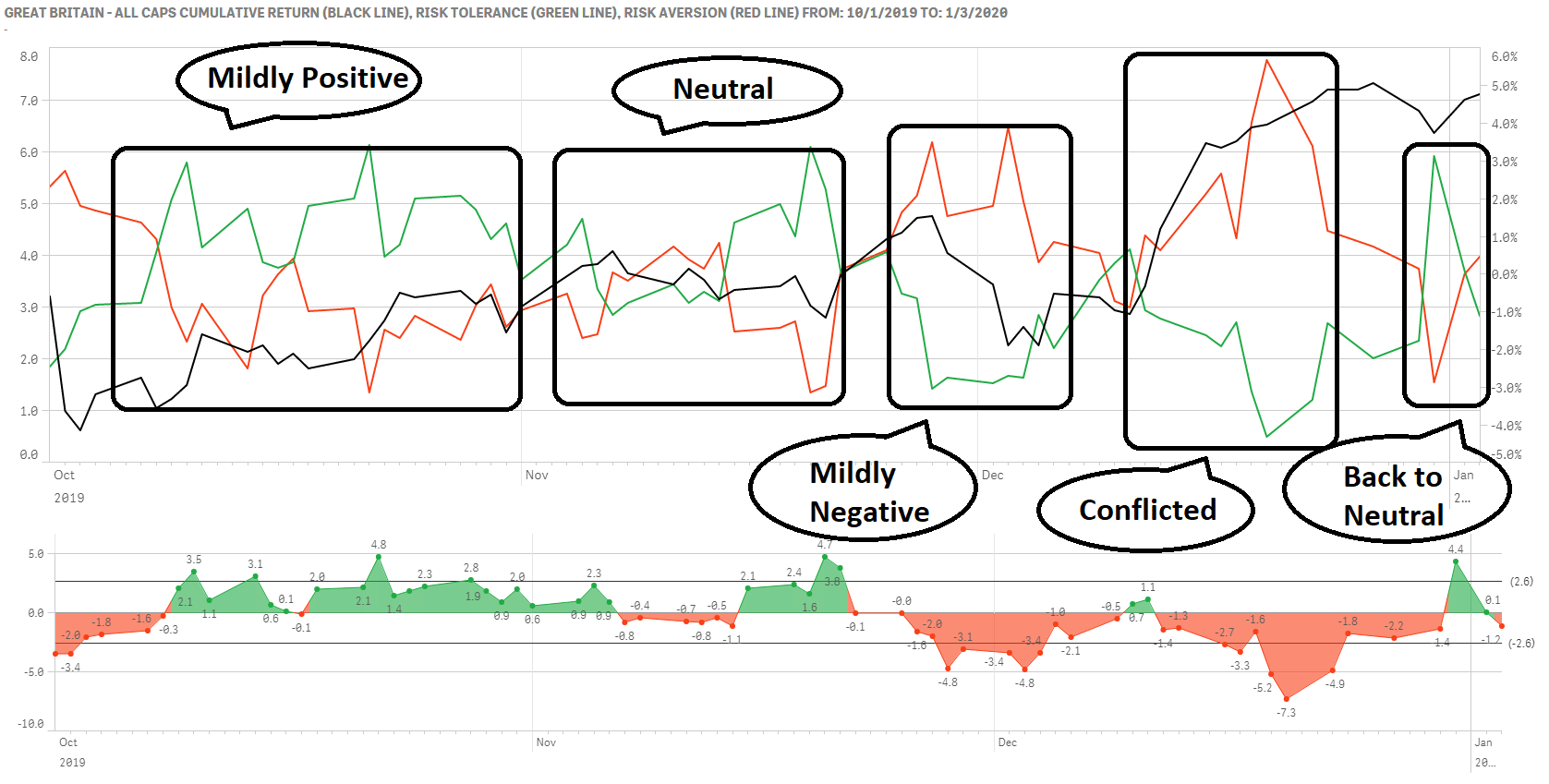 For the first two days of the new decade, all ten ROOF metrics were in favor of risk tolerance in Emerging markets. That follows two days when nine already were, and two more days where eight of the metrics pointed to risk tolerance!  And this is after a week of 8-1 against before Christmas.  I’m not sure what Santa put in emerging investor’s stockings, but it has jolted them out of a prolonged neutral stance and made them all very positive on the near future.  They have even been willing to let go of the last risk averse hold out style, profitability.  Are they throwing caution to the wind here? 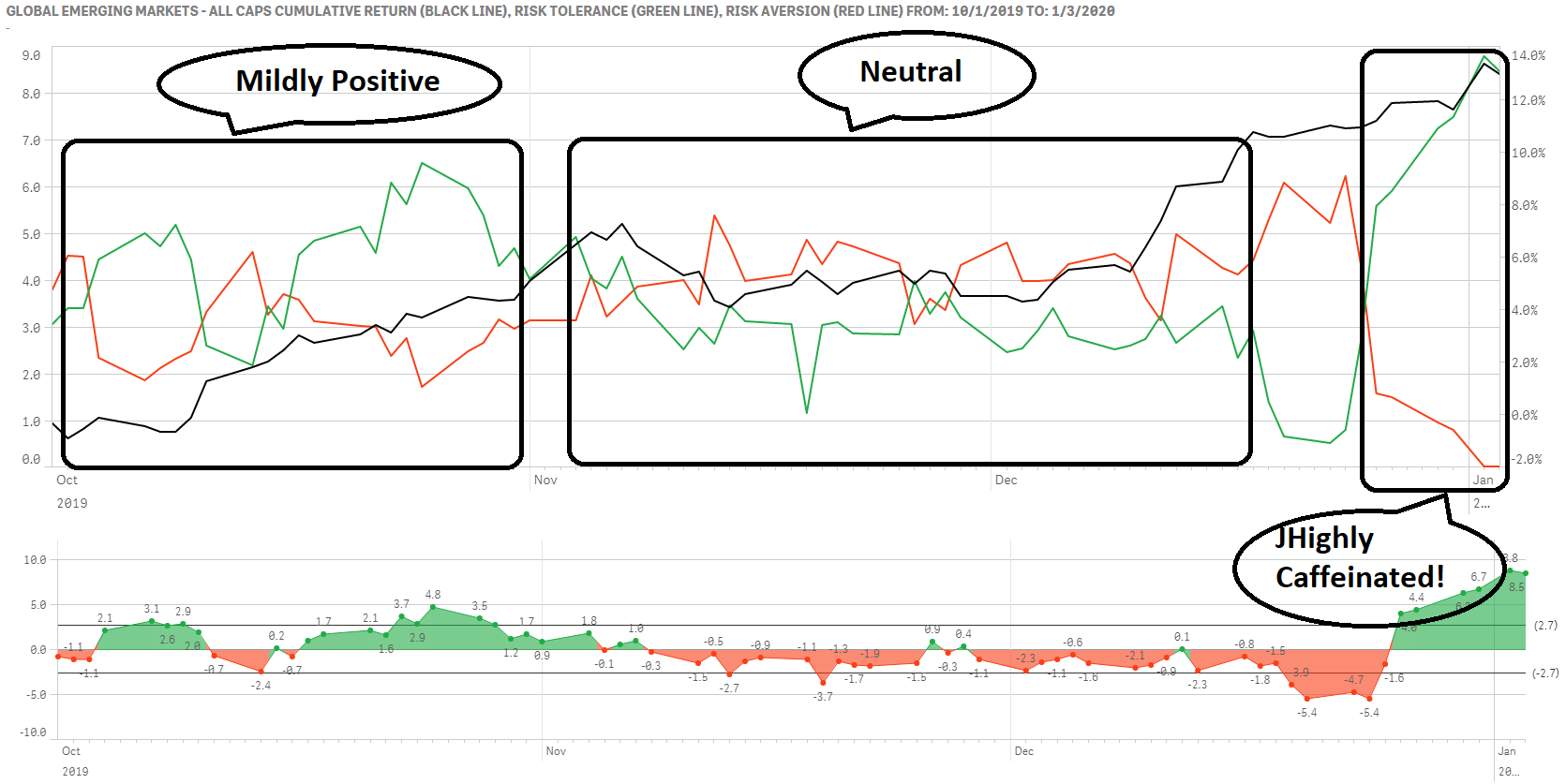