Summary: Sentiment remains positive globally going into this week, but there continues to be signs that investors are growing wary of the disconnect between Wall Street and Main Street. This divergence comes as markets deal in relatives, while the economy deals in absolutes.  Stimulus packages have put a floor under both, but while markets have thought of them as additive, they were really meant to avoid the hardest of hard landings (i.e. a lifeline to keep the most vital parts of the economy afloat until a return to a new normal – whatever that will be). The V-shape recovery scenario markets have already discounted did not include prolonged protests, a resurgence of new cases, a deteriorating relationship between the US and China, or failed trade negotiations. On the positive side, were these issues to be well dealt with, the probability of a successful V-shape recovery would increase, but that would require good leadership.

The divergence between our Style and Sector variant of the US ROOF Ratio is now in its third week. Both remain in positive territory, but the former is now giving a bearish signal after having overshot its peer during the market rebound. This divergence of opinion means that investors continue to prefer risk tolerant sectors (those seen to benefit from recent stimulus packages) but are hedging that bet with risk averse style factor exposures. Regardless, markets continue to climb as central banks are seen as underwriting risk assets.

This divergence in opinion across our two ROOF Ratio variants was seen earlier this year, in January, when our style variant pointed to declining risk appetite two weeks ahead of its sector peer. Back then, the signing of the Phase One trade deal between the US and China was seen as underwriting risk assets, but the divergence between hopes for growth and negative economic data from two-years of slowing trade weighed on sentiment. By the time both the spread of the virus and the impact of the measures necessary to contain it entered collective consciousness, sentiment was already weak and an over-reaction ensued.

We are still far from this inflection point with both ROOF ratios still comfortably in positive bias territory, but the 70 bps decline in the Style variant from a its high three weeks ago, does point to some uneasiness on the part of investors with regards to the probability of a successful V-shape recovery scenario in the face of growing social and geopolitical unrest.  Markets are choosing to ignore that for now, hoping that this week’s Fed policy meeting will see the announcement of more stimulus measures, or, at the minimum, a reaffirmed willingness to support markets in the event of uncooperative geopolitical events. 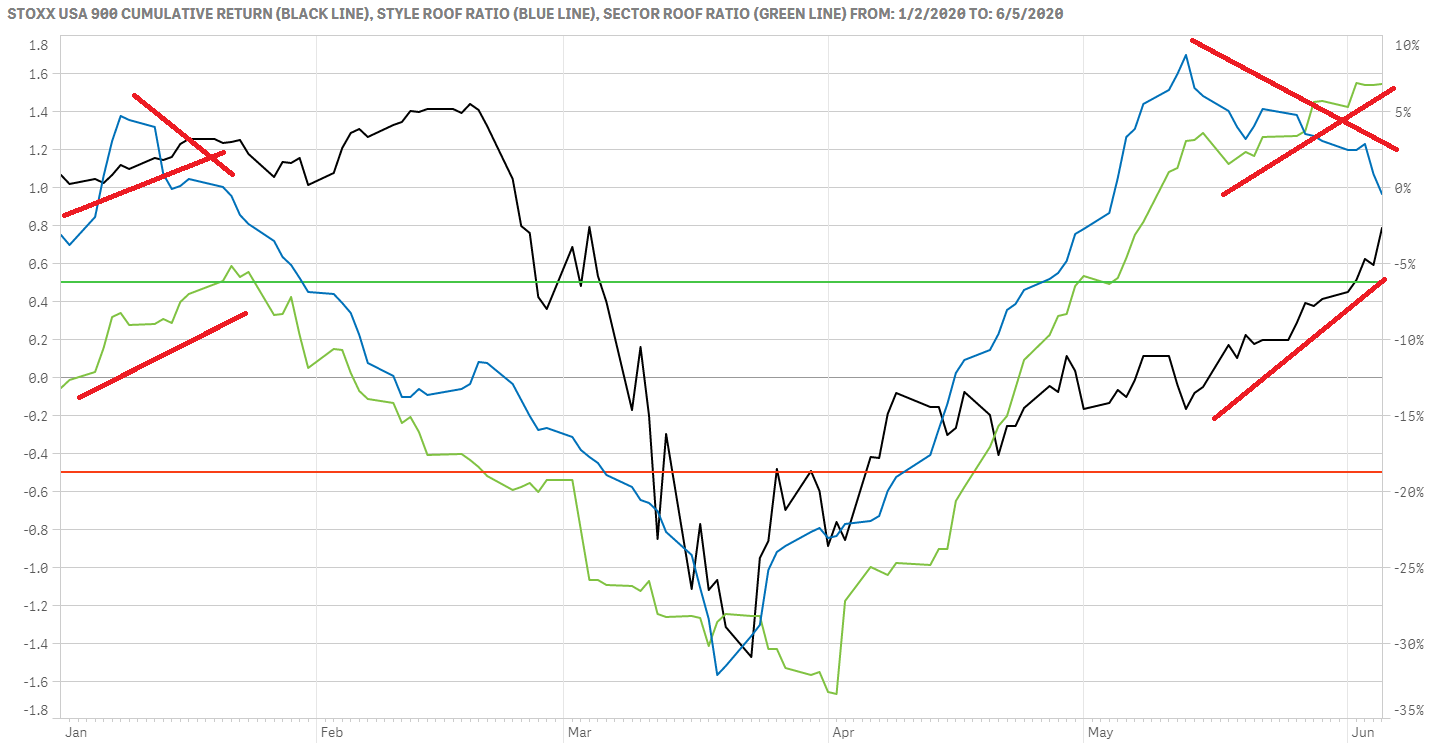 Sentiment in developed Europe is now in-line with markets thank to a rally by the latter.

Large disconnects between sentiment and market returns usually herald a return to equilibrium. Earlier this year, markets had gotten ahead of sentiment which had turned bearish. As negative news on the impact of the coronavirus pandemic hit the wires, this negative confirmation bias lead to an over-reaction and markets corrected, eventually finding equilibrium at the bottom of a 30% plunge. In May, the situation was reversed with sentiment having gotten well head of market returns.  This positive confirmation bias is turning to over-reaction on the positive news of economic reopening across the continent, pushing market returns up to meet sentiment.

We should put this newfound equilibrium into context.  Sentiment has declined sharply in the last three weeks, with the Style variant of the European ROOF ratio declining by more than 120 bps during that time.  Both variants now seem to have found a floor inside bullish territory, but, given the unprecedented amount of risk-tolerance underwriting by both governments and central banks, investors may simply be high on QE rather than organically positive.

If economic rescue packages are what is keeping sentiment afloat, then news of their continued increase this Thursday will bolster both markets and sentiment, while news that they may have reached their limits will unleash a rush for the exits.  May is now behind us, and maybe too the time to sell. The immensely lucrative summer having been canceled, it will take a lot more stimulus to make up for the earnings shortfall. Look for sentiment and markets to sway in parallel with the stimulus narrative. 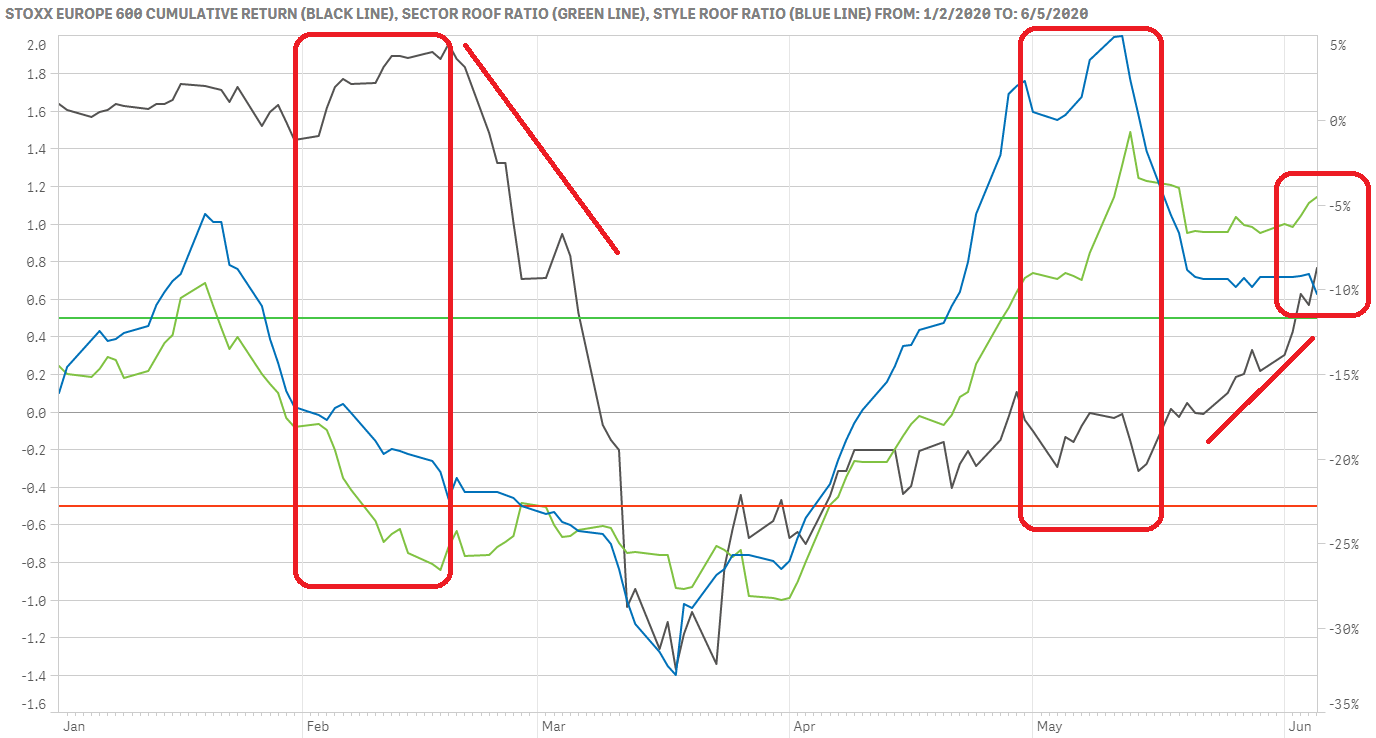 Both global developed and Asia Pacific ex-Japan sentiment exhibit the same divergence as their regional peers with the style variant in a marked retracement while the sector variant continues its slow climb. In both cases markets, previously left behind by sentiment, have caught-up and are now in equilibrium, but the bullish level at which sentiment has remained does not match the level of uncertainty still surrounding the success of global economic reopening. The worst of the pandemic may be behind us, but the new normal, may not look like the old one. 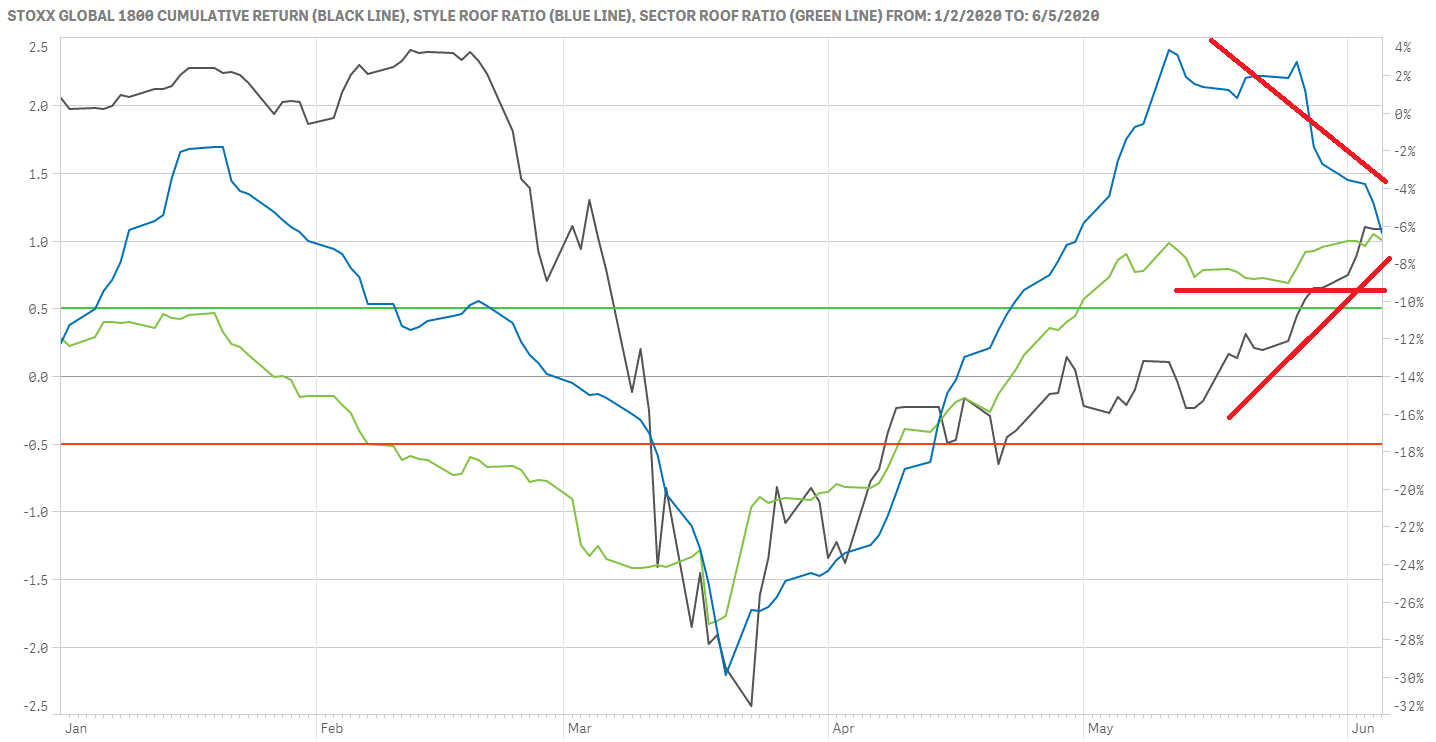 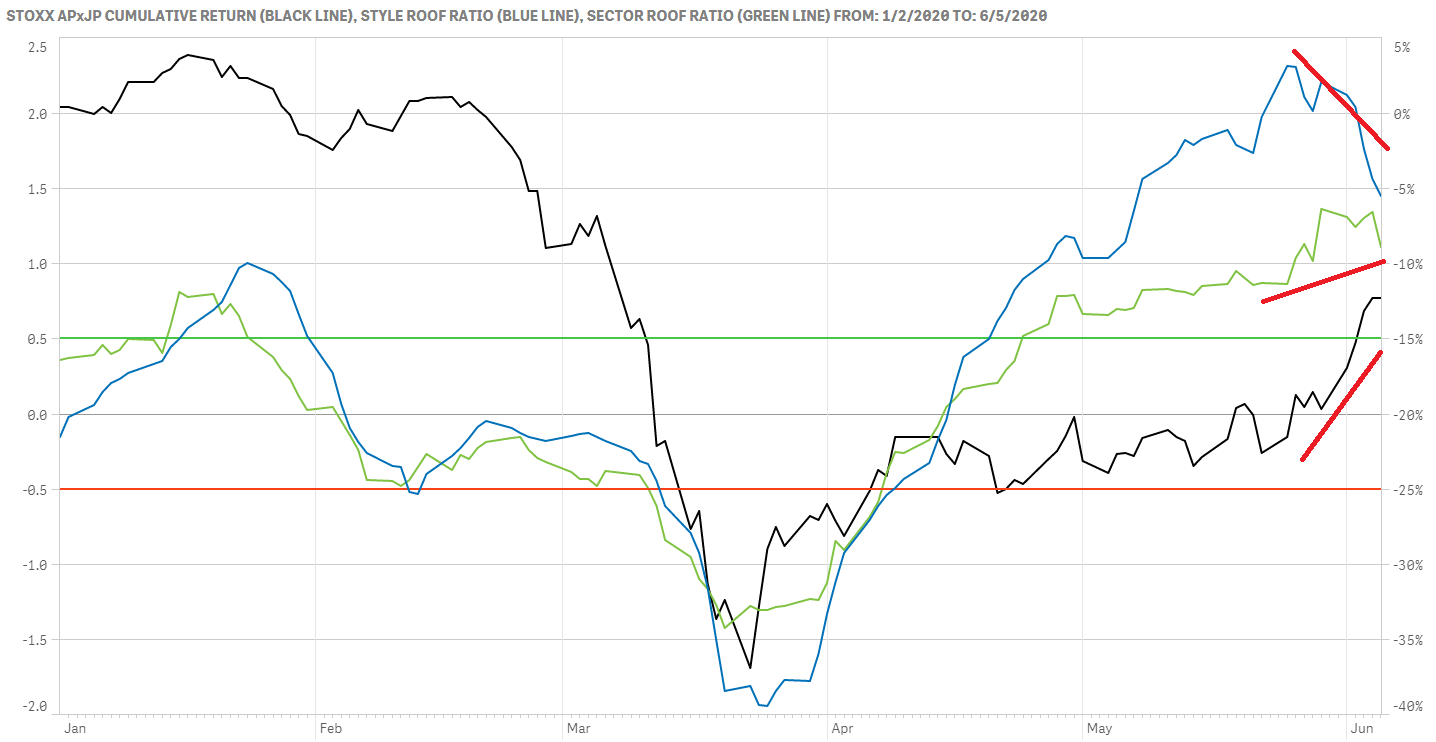