Summary: Sentiment continues to rise with all markets now firmly in bullish territory except China. Investors are betting that the worst of the coronavirus impact is now behind them, having peaked in April, and with the planned re-opening of most G-20 countries starting in May, that the worst of the economic impact will be confined to Q2. Their confidence that both monetary and fiscal stimulus will continue to be applied to give the recovery even more momentum, has helped drive ROOF Scores even higher this past week to levels not seen since Q4 2019 after the announcement of the Phase One trade deal between the US and China. This seems to be the only weak link now; bring back trade war worries, and sentiment momentum may unravel fast. Thus far, both sides have agreed to stick with the Phase One deal, letting investors continue their climb on the wall of economic worries in front of them.

Sentiment in the US regains momentum and climbs to year-high

Sentiment in the US continues to rise as investor’s confidence in ‘Super Fed’ caps the downside risk in their mind and planned re-openings in key states signal an end to the economic damage and a recovery starting in Q3.  Both Style-based and Sector-based ROOF Ratios for the US are now (very optimistically) back to their post Phase One trade deal highs (top chart). Sentiment momentum (bottom chart) has also picked up after China announced it would stick to the trade deal despite being openly blamed for the global pandemic by both President Trump and Secretary of State Mike Pompeo.

Lagging economic data will worsen in the short term, but the Fed seems ready, willing, and able to support markets through this phase. This safety net of sorts is allowing investors to put more faith in the best-case scenario of a successful reopening of the economy during the remainder of Q2, followed by a strong recovery in Q3 & Q4. Up to this point in the earnings season, CEOs have not openly denied this scenario.

Sentiment in Developed Europe continues to be strongly positive, but momentum has stalled.

Investor sentiment in developed Europe reached new highs with ROOF Ratios (top chart) not since Q1 2019, and now seems dangerously ahead of market returns!  Sentiment in Europe has been rising strongly (bottom chart) on the back of improving pandemic curves in the hard-hit countries of Italy and Spain, as well as successes in Germany and France.  This has allowed several countries to start planning their re-opening this month.  Poor economic data is being balanced against stimulus action by the ECB with most investors betting the latter will come out ahead.

Like their US counterparts, European investors have become convinced that the best-case scenario of a successful re-opening is the more likely for now. They have not, however, been as willing to put their money where their sentiment is, as evidenced by the lagging return of the Stoxx Europe 600 index (top chart).  This bullish sentiment as also given up some of its momentum since the end of April, although it seems to have bottomed-out this past week and may start a recovery this week (bottom chart).

As in other markets (except China), sentiment is back to year high. Markets, however, have lagged in a reversal of the disconnect we saw in February when sentiment fell, and markets rose.  Sentiment momentum in both markets is recovering, so, the disconnect this time may work in the markets’ favor.  A key driver of sentiment momentum for all markets has been the declining volatility which is driving more and more risk-averse investors back into the market. Volatility is half as high as it was in early April but remains twice as high as in January, which could point to a still healthy reserve of risk-averse investors which could potentially enter the risk-tolerant ranks if volatility continues to decline. 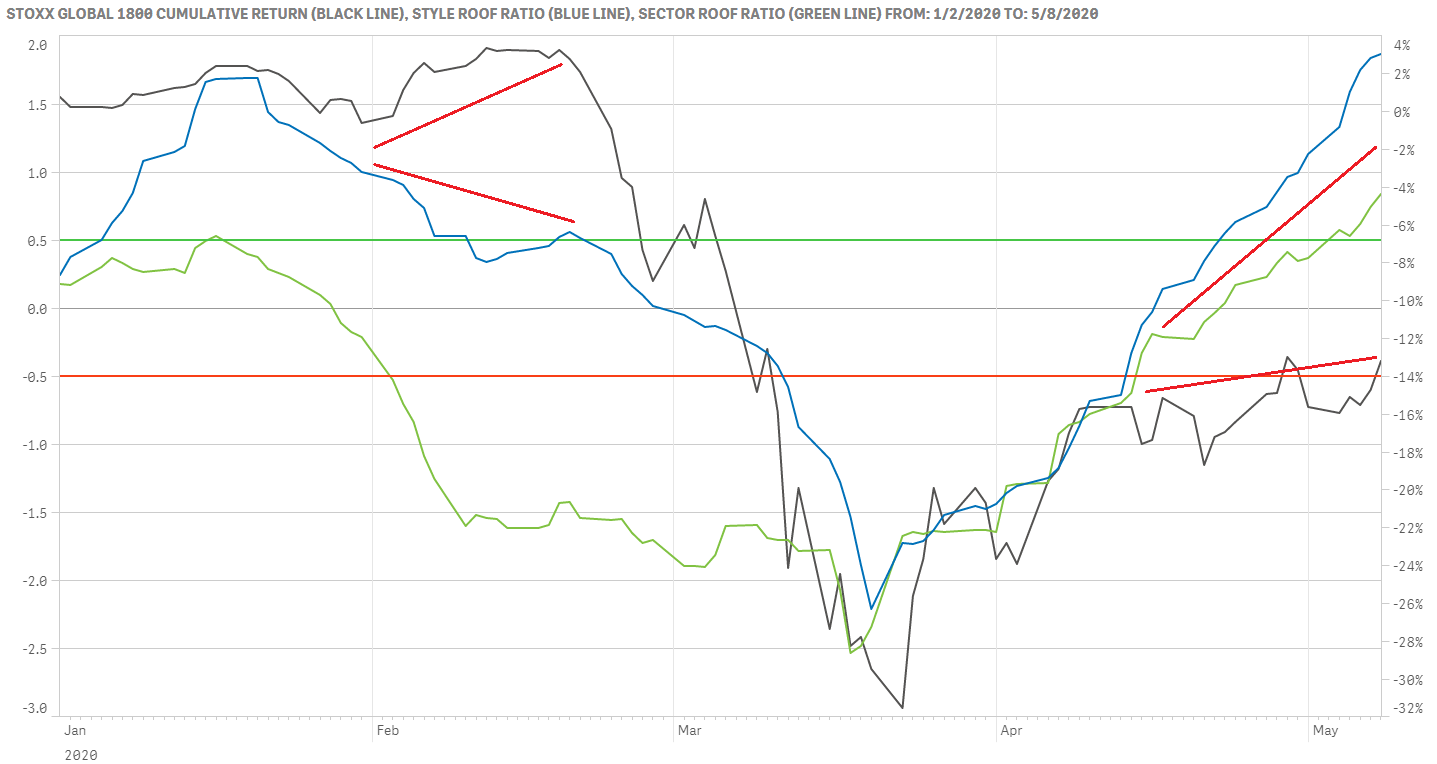 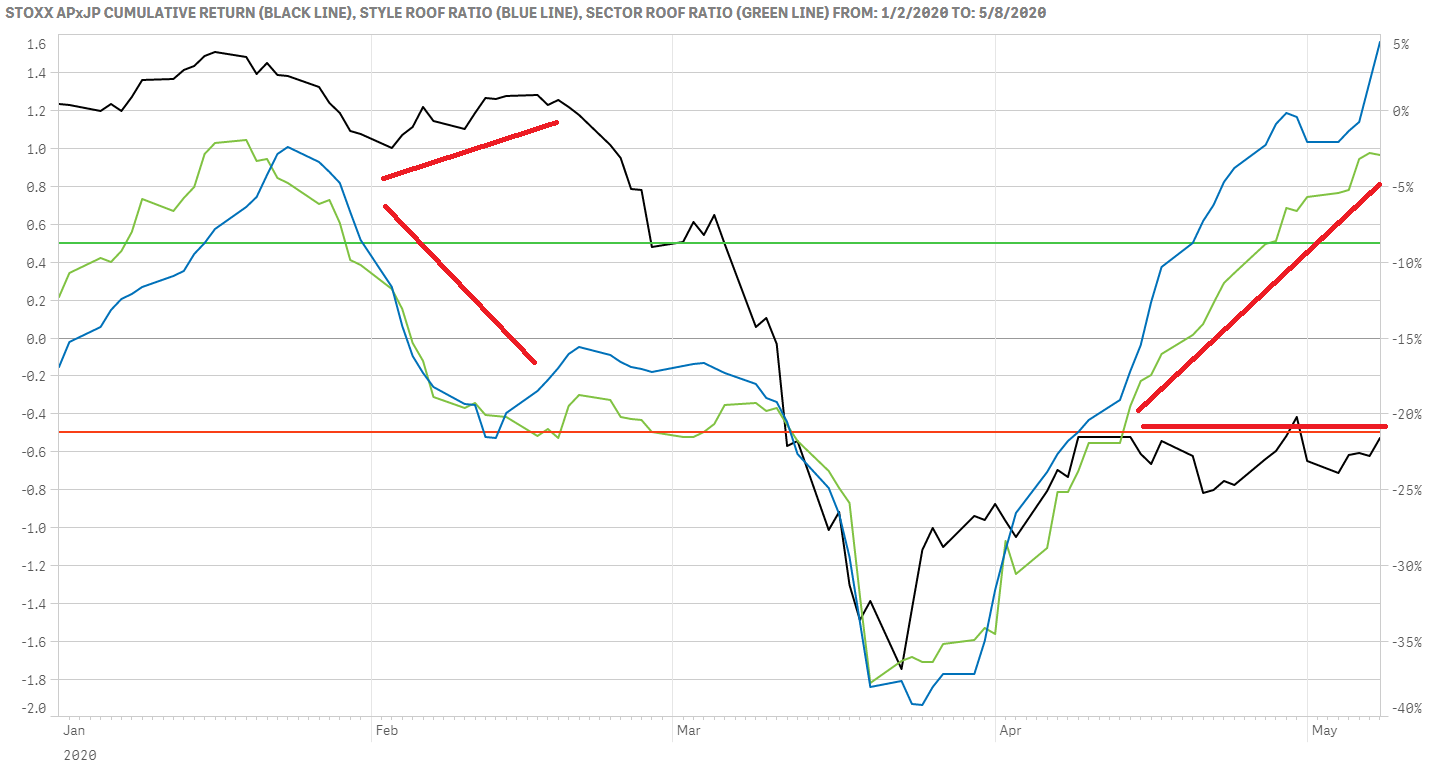