Potential triggers this week: The US earnings season continues next week with over 1,300 companies reporting first-quarter results. On the economic data front, US non-farm payrolls, central bank policy meetings in the UK, Australia and Brazil will be in the spotlight as well as worldwide manufacturing and services PMIs. Other releases include trade figures for the US and China, and GDP data for Hong Kong,

Summary: Sentiment is still rising, but momentum is way down. The problem investors have is that the data so far is pointing to anywhere, instead of somewhere.  CEOs took turn at the podium again last week, unable to remove the cloud of uncertainty shrouding valuations. Until recently (April 16) investors focused instead on what they could see – monetary easing, fiscal stimulus packages, declining volatility, and rising markets – all that glorious temporary stuff.  There is now, and there is later. Now is stimulus packages and easy credit, later is 15% unemployment and earnings recession. Risk tolerant investors are betting later won’t turn into now, while risk averse ones are preparing for when now becomes later. So, although sentiment has been improving since March 23rd (how could it not!), the momentum of this recovery peaked on April 16 and has been declining since.  Now will become later, so don’t try to be wise, that may turn out to be foolish (did I say that last part out loud?).

Sentiment in the US remains positive but has lost all momentum

Sentiment in the US continued to marginally improved last week, the operative word here being ‘marginally’.  In the chart below we introduce a new measure of sentiment momentum.  It is simply defined as the three-day average of absolute change in the daily ROOF Ratio.  What we see below is that as sentiment improved from the start of April, it picked up momentum.  This momentum peaked on April 16 and has been declining since.  In other words, the uncertainty around fundamental data inputs into any valuation model is making it harder and harder to convince risk averse investors to become newly risk tolerant ones. In fact, if we look at the five-day moving average of the daily ROOF Scores themselves, they have already turned, on April 27th(recall that the ROOF Ratio is based on a 20-Day moving average of the daily ROOF Scores). 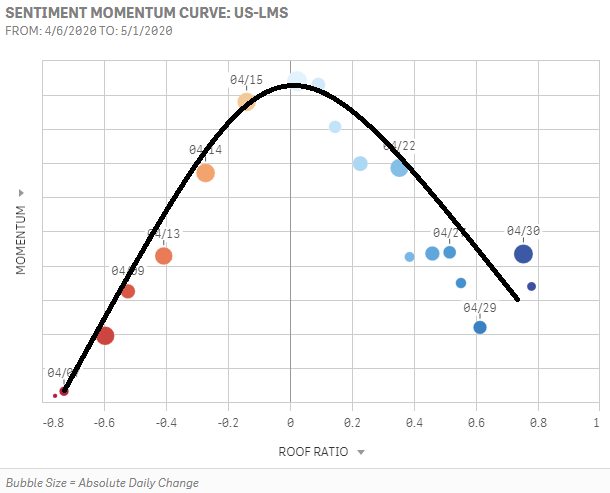 The ROOF Scores and associated ROOF Ratios were developed to quantify the supply and demand for risk in the market. At equilibrium, there are as many risk averse (supply) as risk tolerant (demand) investors leading to a sideways market. When imbalance occurs, markets move in the direction, and proportionally, to this imbalance.  Until April 16, an increasing number of previously risk averse investors became risk tolerant, boosting the size of the imbalance in favor of the latter leading to a sharply rising market. This momentum peaked on April 16. The imbalance is still in favor of demand for risk but decreasingly so, suggesting a pause in the risk appetite at the very least, if not an imminent turn.

Sentiment in Developed Europe continues to be the most positive of all markets we track.

Investor sentiment in developed Europe seem to still be running on fumes. Not only are European investors the most positive about their markets, sentiment momentum, despite peaking on April 28, remains very high. It may just be a case that, like their stimulus packages, they are just a few weeks behind US investors, but for now, they are still buying the V-shape recovery scenario in increasing numbers. 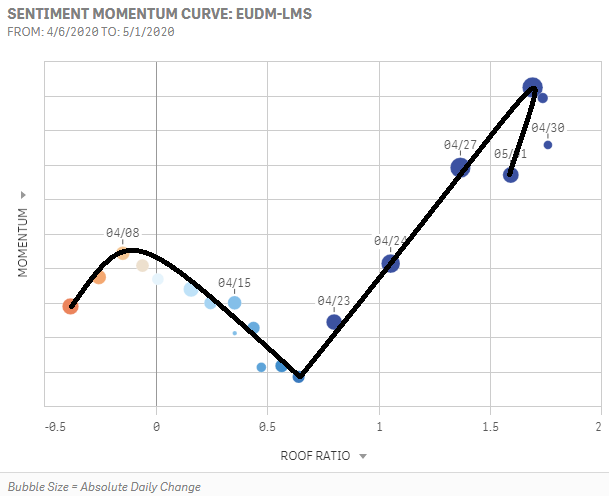 Europe is leading the way in sentiment but lagging in market recovery behind the US. As the first economies start their reopening process, investors will have to wait a few weeks to confirm that scenario. The wild card is geopolitics. If renewed tensions between the US and China rekindles global trade worries, sentiment will head south, taking the market with it.  This is not a case of whether the glass is half-full or half-empty, the glass is made of glass. Throw a geopolitical stone at it and it will break. And as the chart below shows, the 5-Day moving average has already turned there too.

Investor sentiment in both global developed and Asia ex-Japan are Still bullish but their resolve there too is weakening.

As in the US, sentiment momentum made a U-turn in both global developed and Asia ex-Japan markets since about April 16, and although the ROOF Ratios in both markets are at new highs, they seem to have run out of momentum.  This indicates that finding new risk tolerant investors has become exceedingly tough without new evidence supporting the V-shape recovery scenario that everyone has been sold.  Both have also seen a turn in sentiment using the 5-day moving average. A pause or some real concerns?